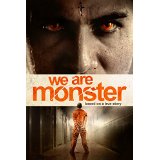 Interpretation, that’s pretty much all a true crime story is. The thing about interpretation is it does not guarantee an accurate account of the facts, just one person’s perspective of transpired events, meaning what you see could either be true, partially true, or a complete fabrication.  When it comes to We are Monsters, what you believe will be entirely up to you, because it definitely doesn’t pull any punches whatsoever. Told from the perspective of the killer, the story shows his decline into madness as well as a multitude of flashbacks that simply left me questioning how this guy wasn’t locked away sooner and why the key wasn’t encased in a concrete slab.

The story starts with Rob Stewart entering what seems to be a minimum-security facility for juvenile offenders. Through some kind of error, the guards do not have all the details about this offender at their disposal, such as his psych records and prior offenses. Believing him to be a non-threat, he roomed with another offender who is due to be released in a few weeks. What the guards miss is Stewart, a delusional psychopath with racial violent tendencies. Throughout the film, several instances illustrating the threat Stewart poses are brought to the attention to the superintendent of the facility, ranging from racial explicit letters to an inmate relocation request, all of which are ignored due to the facility’s overcrowding as well as what can only be viewed as a general lack of motivation and caring on the part of the staff.  The continuation of Stewart’s delusions as well as the inaction of the guards all culminate in an act that will leave a family devastated.

My trouble with the story begins with whatever error resulted in Stewart’s psych records as well as his prior offenses not being included in his record. In fact, the only way we learn about it is through Stewart’s delusion. If not for that brief mention, the audience would have been left completely in the dark. Granted, I’m sure these kind of errors do occur, not often, hopefully, but occasionally. It may have been beneficial to have had a secondary mention of this fact just in case the audience wasn’t paying attention when Stewart’s alternative self brought it up.  That mention pays a pivotal role in my opinion, because without it the audience would likely spend a great deal of time wondering how the guards could have possibly placed a violent racist in the same room with the subject of his hate.

Acting-wise, I gave the lead character points for being able to perform double duty in this film, being as his character’s main interaction is with another version of himself, goading him to carry out his (or is it their) will. There are few instances where I’ve seen this done well. It requires a great deal of ability on the part of the actor, so points for that. Identifying with the character was a challenge, likely because he did not possess one redeeming quality, but the performance was ideal for what the character needed to be.

As far as the story goes, I’m curious to see how accurate its depiction was to the actual events (however, that is a mystery I will have to solve on my own time). I’m just finding it hard to reconcile how Stewart wasn’t locked away long ago based on all the horrible things he has done dating back into early childhood. The only way I can find it possible is to believe is that he was good at hiding it, but based on his actions and attitude while in the facility, it’s a little hard to believe.

Overall, if you enjoy true crime story and are not easily offended, you may enjoy We are Monsters. I would advise a couple of things to further your experience: don’t examine things too closely, and remember that this may have taken place with different rules than where you’re from and at a time different from yours.

Jeremy Butler is a film school graduate of the International Academy of Design and Technology. He is been writing for Upcomingdiscs since 2012; however, movies have played a big part of his life for much longer. Favorite genres include horror, science fiction/fantasy, and comedy. Favorite movies are V for Vendetta, Boondocks Saints, Kiss Kiss Bang Bang, and The Godfather.
Soldate Jeanette The Who: Live At Shea Stadium (1982)