Posted in: No Huddle by Archive Authors on July 7th, 2015 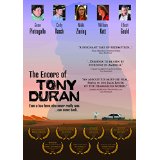 We follow Tony Duran, a washed up performer who was never a big name to anyone, and whose life is starting to fall apart. He has become an obese alcoholic who stacks lies on top of lies in order to not seem like the bad guy to the people who still care about him (all two of them). After one last attempt to get some money so he can pay off some of his increasing debt, his son turns away from him. In the aftermath of this, Tony’s friend Jerry challenges him to become a better person. He gets Tony to sing in front of people (like he once did), and Tony’s eyes finally open to the truth. He sets off to lose some weight, stop drinking, and prepare for a show that Jerry has lined up for him.

This movie loves to try to pull at your heartstrings, and if it doesn’t do that, it will definitely try motivating you. Tony Duran is one of those guys who loves to make excuses for himself. Why doesn’t he have a job?  “Nothing pays enough.”  Why doesn’t he go to AA meetings?  “Because the people there only care about making themselves feel better, not actually accomplishing anything.” Sure, the basis of the story is something that most audiences have seen before (take Family Man for example), but if self-improvement is a predictable trope these days, that isn’t necessarily a bad thing. The words that come from the characters in this are something every person in this life should hear, like when Jerry tells Tony, “People who believe their own lies are the most dangerous of all”, speaking to the danger they pose to themselves as well as others. This movie is a straightforward, no nonsense, motivational piece that doesn’t need to hide behind subtext, because the story does well enough to tell the audience exactly what they need to hear.

The direction in this worked well with the music, and when the story is about a singer, that is important. Even if you look away from scenes where Tony was actually singing, and are just left with the background music, you will find a pleasant harmony. The music draws you in to the scene’s importance and never repeats the same tune. The bad part about this competent direction is that we are never treated to any “movie defining shots”. I never see anything in the movie that makes me think I will remember that scene for the rest of my days. I am not going to think of a scene where Tony is singing, like I would think of the gates of Jurassic Park opening for the first time. So competent, but nothing to write home about.

The acting in this is all over the map, and it is sad that such a great story couldn’t have better actors to back up the dialog. Of course, I am not talking about Elliot Gould. He is still as warming a presence on the screen as he ever was. It is like he mixed his character from Ocean’s Eleven and his character from American Pie to come up with Jerry, and the best part of this is that he never seems bored with the picture. Complete professional. I am not talking about Gene Pietragallo, who wasn’t bad as the main character; he sets a pretty good tone of pathetic and determined throughout, and that’s all I can really ask for.  I am definitely not talking about William Katt, who almost steals the entire movie with his small performance as Art. He makes me believe that he is the lowest piece of scum to get involved with, and when he was on the screen I couldn’t turn away. The people I am talking about are Cody Kasch and Nikki Ziering. Cody can’t seem to find a happy medium between overacting and really over acting, like in the scene where he finally says goodbye to his father. Nikki seems to have a problem finding emotion, or at least making me believe that she has emotion. When Tony confesses his love for her, he is basically talking to a piece of wood. You can tell that she may be trying to emote, but it never comes through.