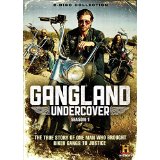 “When I first took the deal to become an undercover informant in a biker gang, I did it to save my own skin. But over the next three years, putting bad guys away became my personal mission. I saw it as a chance to make amends for my past mistakes, but I paid a heavy price. I’m Charles Falco, and this is my story.”

So, who the heck is Charles Falco? For a while he was a rather successful meth cook who was pulling in 100 g’s a month. He appeared to have it all: fast cars, big house, and a trophy wife. The problem is that he got hooked on his own product. That leads to mistakes, and he lost it all when the cops came busting in to topple his drug empire. He faced 20 years or more in prison, and there was only one way out of the mess. The feds had just lost their informant inside the infamous Vagos motorcycle gang. When I say lost, we’re talking a hole in the head followed by an unmarked hole in the desert. Falco could work off his time by infiltrating the gang. Of course, he didn’t even know how to ride a bike. This should get interesting, and sometimes it does. The problem is that sometimes it doesn’t.

Starting in 2007, History had a pretty gritty reality series called Gangland. Each episode would take you to a different city and inside the ranks of a notorious gang there. You saw the typical informants who often had their faces covered by bandanas and their voices were usually electronically altered. After all, the show always reminded us that snitches get stitches… or a lot worse. A narrator filled us in on the various symbols and history of the gang, while the film crew took to the streets to show us the environments from which these gangs sprang. The show enjoyed a 7-year run. Now five years later History has resurrected the series with a new twist in this special mini-series Gangland: Undercover.

Each episode begins with the real Charles Falco hidden in shadows atop his bike, his voice altered just like the original show’s snitches. He delivers a few lines that set up that particular episode. From that point on we take a new path for the series and watch the events unfold pretty much like a normal scripted drama, what the network calls a fact-based series. After the intro Charlie Falco is played by Damon Runyan. Runyan as Falco continues the narration through huge close-up sessions that will remind you of the “confessional” boxes in traditional reality shows. It’s a bit distracting, and none of the information is exactly necessary. It’s a pretty good example of writers telling us instead of showing us the action.

That’s not to say we don’t see plenty of action. Most of the episode’s running time is taken up with the standard drama format. In six episodes we see Charlie go from his first contact with the gang to a hangout to a prospect to a fully patched member of the Vagos. He gains the trust of the gang’s vice-president, Kidd (McIntyre) and attempts to work his way to trusting the gang’s president, the unpredictable Schizo (Nunes). Along the way he picks up an “old lady” who ends up moving in with him. Not the best idea when you consider he’s getting calls from his fed handler and carries around a digital recorder to gather evidence from the gang. The relationship really doesn’t do much to drive the story. Suzanne (Scrofano) is there merely to build a little tension. It’s a cheap way to get us worried that he might get caught. There are too many “will she/won’t she” moments that you quickly recognize it for the tease that it is and just ignore it.

The gang is populated with the expected stereotypes. You have Darko (Matthews), who is the suspicious sergeant-at-arms. He doesn’t trust Falco and eventually becomes somewhat of a rival for the attentions of the Prez. Stash (Cade) is the newly-patched member and the requisite psychopath. He’s wired and quick with the temper. He’s the kind of guy who gleefully steps up to kill someone for the club. Lizard (Francks) is the necessary wise old member who is also their master mechanic. Unfortunately for the gang, and us, he likes to work in the nude. Falco’s handler is Koz (Cohen), who appears to find amusement in Falco’s jeopardy.

If you’re looking for another Sons of Anarchy here, it’s best if you just get those Blu-rays off the shelf and run them instead. Gangland: Undercover doesn’t sport near the kind of tight writing and wonderful characters that you’re used to with the Sons. It’s a different kind of animal, and that’s not always a bad thing. Some of the action here is pretty gritty and likely closer to the street than the Hollywood version. Unfortunately, the characters never get a chance to fully develop, and the pacing makes it nearly impossible to get any kind of a rhythm with the story. His introduction and eventual acceptance by the gang happens too quickly to feel real at all. Obviously, we know that months are passing by, because Falco tells us that. But if I wanted a show to tell me things, I’d listen to books on tape. The decision to accelerate that part becomes more unforgivable when the show decides to slow down considerably while the gang does a jail stretch. It’s strictly lullaby time now, and suddenly the buildup and details matter. I assume the show needed to make the most out of those sets and couldn’t afford to zip through it as fast as the introductions. In the end you never get the sense of the long-standing brotherhood that made Sons stand out so well. And that doesn’t require a huge budget. It’s not really a competition. There’s room for plenty of shows on my plate. I just want them to be a little better. Like most of you out there, “I love to experience pleasure.”

Gino Sassani is a member of the Southeastern Film Critic's Association (SEFCA). He is a film and television critic based in Tampa, Florida. He's also the Senior Editor here at Upcomingdiscs. Gino started reviewing films in the early 1990's as a segment of his local television show Focus. He's an award-winning recording artist for Omega Records. Gino is currently working on his 8th album Merchants & Mercenaries. Gino took over Upcomingdiscs Dec 1, 2008. He works out of a home theater he calls The Reel World. Favorite films: The Godfather, The Godfather Part II, The Body Snatcher (Val Lewton film with Karloff and Lugosi, not the pod people film), Unforgiven, Gladiator, The Lion King, Jaws, Son Of Frankenstein, The Good, The Bad And The Ugly, and Monsters, Inc.
Encore of Tony Duran Merchants of Doubt (Blu-ray)