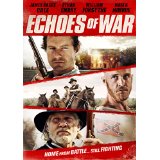 I have often wondered how blood feuds got started in the western times. The Hatfield and McCoy feud is the most legendary, of course, except before long how the whole ordeal started just became a bunch of he said/she said. In the case of Echoes of War, it turns out that the feud that is sparked between the McCluskeys and the Rileys began over a just cause; however, the battle was bit one-sided and slow-paced for my liking. Not the mention the film does a bit of a 360 on me that really turns me against the person I spent the entire movie sympathizing with.

The McCluskeys and Rileys are neighboring families who both have suffered tragedy recently. The McCluskeys lost a son in the war, and their business has been reduced to near nothingness; most of their cattle were commandeered by soldiers, leaving them with next to nothing. The Rileys lost a mother to illness, and the return of her brother Wade (James Badge Dale) provides another mouth to feed when food is already scarce. The Rileys make their living trapping animals and selling their pelts. One day while out with his nephew, Wade notices that the McCluskeys have been poaching from their traps without even offering to share the spoils that rightfully belong to the family. His brother in law Seamus knows what the family is doing and has no intention of speaking of or taking action.

The idea of poaching does not sit well with Wade, who takes matters into his own hands despite the family’s request that he leave the matter alone. He tries the civil approach first, going to speak with the patriarch of the McCluskey family, Randolph (William Forsythe). Randolph is unapologetic over his kin’s action and makes it clear that he has no intention of stopping. Feeling like he is left no other choice, Wade takes action to defend what he believes rightfully belongs to his family. However, Wade is also waging another war with the memories of his time in the war. The feud continues, culminating in tragedy that neither family will recover from.

At first blush, I was intrigued with the movie. It is a bit slow in certain parts, and there are about ten minutes in the beginning that could have been shaved off. The action is muted, as there is not a lot of gunplay and explosions that I expected to see. Then again, we were dealing with a limited cast; therefore, there weren’t expendable characters. Despite the limited cast, I would have hoped for some more direct action to better hold my attention, as what I received quickly became mundane and failed to hold my interest. The alternate storyline between the warring families’ children I found to be unnecessary, as it added no real substance to the overall plot. That is time that could have been better served on the main storyline.

The film does explore an interesting theme: when it’s right to take action. The Rileys with the exception of Wade refused to take action due to their religion. However, Wade brings up a good point during his confrontation with his brother-in-law: was his inaction really about religion, or was it cowardice? This exploration piqued my interest and brought me around to Wade’s point of view. Had the film stayed on this track, it would have made for a more compelling story; however, as I said earlier, things quickly did a 360. I understand the morality provided by the bittersweet conclusion of the film, but the conclusion will likely alienate audience members against the family rather than rally them behind it. It certainly was the case with me, as I went from sympathizing to withdrawing from the story completely.

In conclusion, while I did enjoy the theme of the story, when it deviated from this course, it lost my interest. The bittersweet ending provides a proper moral to the story but left me without a satisfactory conclusion. With a few slight changes and bit more action, I think the story could have been more compelling.

Jeremy Butler is a film school graduate of the International Academy of Design and Technology. He is been writing for Upcomingdiscs since 2012; however, movies have played a big part of his life for much longer. Favorite genres include horror, science fiction/fantasy, and comedy. Favorite movies are V for Vendetta, Boondocks Saints, Kiss Kiss Bang Bang, and The Godfather.
Yu-Gi-Oh Gx: Season 2 Contest: Win A July Prize Pack Of Three DVD’s From ARC Entertainment