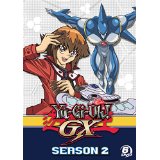 Jaden and friends are back for another semester at dual academy. Some friends have changed, like Syrus, who is now a Ra Yellow, and Cyrus’ brother Zane, who is now in the Pro League. This time, since Jaden’s old pal Chumley is gone, he is joined by another Ra Yellow student, Tyranno Hassleberry, a dinosaur dualist with a military mindset; however, with new friends comes a new evil for Jaden to fight, the light: a mind-controlling entity that is taking over the school, trying to take over the world, and has Jaden is in his crosshairs. Can Jaden save his friends, and save the world, without getting controlled by the light?

So let’s get the good things about this series out of the way first. I’m glad to finally get some more clarification on what careers this “school” actually offer their students. You can either be employed by “Industrial Illusions” (the card company responsible for making Dual Monsters), or you can go into the Pro Circuit.  I was wondering what kind of career a Pro Dualist can have, and apparently it is a lucrative one. Big Companies employ Dualists to drive other Dualists to their companies, and since Dual monsters is the biggest competition in this series’ universe, it is a smart plan. I was glad to see that Jaden finally matured to the point where he noticed girls, since last season he didn’t seem to return the affections of the most popular girl in school. I was glad to see Syrus gain some confidence and become a Dual Monsters force to be reckoned with. The biggest good this second Yu-Gi-Oh series does is making the moral of each story confidence and care. Almost every speech is layered in “belief for one’s self” and “your friends will see you through to the end.” While that may have been the same basic principles of the first series, it is still a good moral.

Now for the bad parts. This series still does everything in its power to remind us of the old series (beyond actually revealing Yugi Motou himself). I can understand why you would want to make some callbacks to the old series, but spending half of Season 2 running around with small characters from the first series just invites comparisons to that series. As opposed to Yugi, Jaden is still as upbeat about everything as he ever was, and it is still annoying. The first series showed us that the characters had some level of concern for the stakes they were dueling for; these characters only want to have fun. Even when the characters are trying to show some kind of concern, the supporting cast reminds them to have fun. A little more seriousness would not hurt.  Some of the supporting cast of this run for Yu-Gi-Oh was dropped, and unfortunately it was the part of the cast that I liked. We only get to see a small portion of Bastion, Alexis is resolved to being a villain for a good portion of the season (as well as Chazz being brainwashed into full on evil, instead of just being a rich snob), and Chumley makes one appearance… voiced by a different actor than the first season Chumley. The small parts of what made the first season endurable are gone; they fixed some problems only to give us more. While I can appreciate that they gave us at least one duel per episode, they reduced the severity of a low life point count when they made each duel down to the last 100 points or so.

While there maybe something here for the ultimate Yu-Gi-Oh fan, I just couldn’t find much interest in it. Since they kept making callbacks to the original series, I kept thinking how much better that series is than this one.