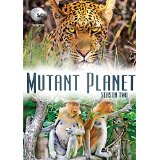 As one who uses animal shows as a precursor to taking a nap — much like Pavlov’s theory when I hear the melodious voice of the narrator, I drift off into a restful slumber — I expected the same experience with the second season of Science Channel’s Mutant Planet. Having never experienced season one, with popcorn and large cup of coffee in hand, sitting – not reclining — in my living room recliner – I was ready to ward off the yawns. Boy, was I was wrong. Mutant Planet Season Two in its glorious five-episode 220-minute runtime is, in one word, amazing. I was not expecting to say “wow” every 10 or so minutes, but that’s exactly what I did watching what animals did to adapt to their ever-changing surroundings. Mutant Planet, in layman’s terms, explained how animals evolved and mutated to survive against the odds based on their environment. This is not a show to watch in standard definition. The stunning cinematography of this program made me glad for my high-definition TV, showcasing the brilliant colors and crisp details of the odd inhabitants of the most unique ecosystems on Earth.  From capturing footage that would normally never be seen by the human eye to exploring the history of the animal and its changing locale via CGI, I have never been more fully paying attention to an animal show than this one. Mutant Planet Season Two toured across the world from Africa, Borneo, India, Namibia, and Central America, visiting the most interesting, sometimes frightening, creatures and plants on our planet. These are a few of my favorite highlights.

In Africa, with exotic species found nowhere else on Earth, I was introduced to terrifying blind killer driver ants that communicate by touch and scent, and devour everything in their path. I was hoping when the episode focused on the adorable-looking chimpanzee in the Albertine Rift, that I could ooh and aww over precious babies, but instead I discovered this benign-looking creature which I see occasionally in the zoo is a meat-eater. Not only is he a meat-eater, but a hunter who could eat fruit, but sometimes has a craving for the flesh and blood of other smaller monkeys. After closing my eyes until my husband said the chimps were done devouring the BABY of their prey, I will never look at Tarzan’s BFF the same way again.

A trip to Borneo cleansed the palate from the monkey murder to mini animals, pygmy forest mammals like a petite rhino and elephant. It was heartbreaking to see a family of elephants in need of food cross a river with a one-month-old baby in tow. The little trunk barely made it above the water, and I was sure she would be lost. When they made it to the other side, she floundered trying to get up the muddy slope. I thought – this is it, she’s going to be trampled by the larger adults. Instead, much like a human, her big sister used her foot to push her up the incline.  So I was happy for my “aww” moment. From mini creatures, I was introduced to the world’s rarest ape and creatures that glide across the jungle.

In Namibia, in the oldest desert in the world, with scorching days and frigid nights, where less than an inch of rain drops in a year, the creatures have adapted to harvest even the smallest drops of water.  Not that I ever knew where ostriches lived, but I had no idea they survived in desert climates. I also had no idea that a chameleon can run. In the zoo, they sit and stare at you unmoving, but this little guy runs to capture its prey and eats 100 beetles a day to get enough moisture to survive the arid desert. I could do without close-ups of the termites, but that’s just me being an anti-bug person, and as they are needed for the ecosystem, I waited for the “bug” portion to pass to learn more about the strange and hungry anteater.

In Central America, it was all about color and sound to attract attention in the dense canopy. And dancing. The red capped mannequin bird dances across a tree limb to entice a mate. Monkeys howl. A white color mannequin bird claps his wings while hopping between branches as a courtship display. The hummingbird uses its iridescence to be visible to potential mates, but not to predators. It was interesting to learn what an animal in another climate can do to adapt. The anteater, the survivalist of Namibia, has a smaller relative, the tamandoua anteater, that has adapted to climb to find his ants and termites in the trees. I discovered I really want a kinkajou– though he costs upwards of $2500 when I jokingly googled if he’s legal in the US- he’s fuzzy, big-eyed, and adorable and helps pollenate plants in his nocturnal excursions.

Though I enjoyed learning about the prehistoric giant purple frog in mountains of India that has outlived the dinosaurs, the bear that has adapted to his surrounding by eating termites, and wanted to free-frame the picture of the gorgeous tiger falling asleep in the water, and learned so much about all the other creatures that have evolved to survive the monsoons, it wasn’t India, but Borneo and the kindness of the loving elephant family that stuck with me the most.

This beautifully-shot epic educational series has proved to me that an animal show can actually be the antithesis to a sleep aid. Mutant Planet season two shows how when nature throws out the rule book, plants and animals will evolve however necessary to survive and thrive in both the world’s most beautiful and luscious, and desolate and hostile landscapes.