All Quiet On The Western Front:The Uncut Edition (Blu-ray) 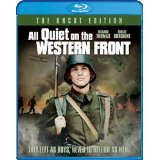 “This story is to be neither an accusation nor a confession, and least of all an adventure, for death is not an adventure to those who stand face to face with it. It will try simply to tell of a generation of men who, even though they may have escaped its shells, were destroyed by the war” – Erich Maria Remarque

Like most people from my generation, I suspect, I saw this version of All Quiet On The Western Front first in a high school history class. I can’t for the moment recall if it had been a world history class or American history. It was a popular choice among both stripes of history teachers in its day. As a history teacher myself, I have to admit I have never used it. I would guess that’s true of most teachers these days. Contemporary classrooms can ill afford to spare the three hours of running time. That’s unfortunate. It’s a powerful film that everyone ought to see at least once.

They say that war is hell, and I don’t doubt it for a moment. But trench warfare was a particular kind of hell that was somewhat unique to World War I. The very trench that often saved a soldier’s life could very well be the thing that ends up taking it away. In the trenches there was more than the enemy fire to worry about. Disease ran rampant. Corpse rats and low-hanging gas were often a problem. Very few films take you so intimately inside those trenches than does All Quiet On The Western Front.

The film was based on a book by the above-quoted Erich Maria Remarque, the title itself taken from a famous end-of-the-war communiqué. The film is also a remake of a 1930’s film based on the same material. Both the book and original film appeared at a time when the events of World War I were still partly living memories. Remarque himself wrote some of the book from his own experiences on that very front during the war. Both were effective and grim reminders of The War To End All Wars, which, of course, it wasn’t. By 1979 those soldiers along with their memories were fading fast. It was the perfect time for a refresher course, and this movie certainly provided it then. Thanks to Shout Factory and Timeless Media, that lesson is about to be refreshed once again.

Paul Baumer (Thomas) was an idealistic student. He was an artist who would rather draw pictures of birds than anything else in the world. As his school days come to a close, he’s the victim of a speech about duty from his headmaster (Pleasence). The film follows his experiences as he goes from naive 18-year old small-town boy to boot camp where he ends up suffering under the drill of a man his friends once abused in the town. From training it’s off to the front where Stanislaus Katczinsky (Borgnine) takes the green soldiers under his wing.  We watch as Baumer experiences and is ultimately changed by his situation. It’s a moving tale of coming of age and the cold brutality of war. The story is told through Baumer’s letters and the narration of Richard Thomas.

Richard Thomas was a solid choice for the role. He had just come off of his popular eight years as the lovable John Boy Walton on The Waltons. John Boy was also very close to Baumer in many ways. Both had a flair for words, and both began life with simple small-town sensibilities. He plays extremely well off Ernest Borgnine, who also played a role we’ve seen him in before. The casting choices offered a feeling of familiarity in both characters that make them both instantly recognizable and instantly relatable. The two shared a wonderful chemistry that pays huge dividends in a moving scene toward the end of the film. It’s a moment that would have been impossible if we didn’t believe and understand this relationship and these two men intimately. The casting immerses us so that it doesn’t matter that none of these actors pass very well as German soldiers.

In the days before Saving Private Ryan, this might have been one of the more realistic war films made. It’s not hard to understand why it was popular in so many classrooms for decades. There isn’t any time wasted with many grand battle scenes. We get just enough…a taste to tell the story. The rest is pure characterization. The story does a solid job of balancing the war experience through Baumer’s circumstances. We see not only the trench war but a short respite that was copied in Fury for the same purposes. Three of the young men encounter French women who invite them for a meal and a further education in their coming-of-age story. Baumer is injured, and it gives us a closer look at the hospital experience and the fear of ending up in the almost mythic death room, where lost causes are sent until they finally die, conveniently located next to the hospital morgue. A convalescence leave sends Baumer back to his small town where he understands he no longer belongs. It also offers a disappointingly brief encounter with the man who “inspired” him to enlist. His father and his friends would talk strategy knowingly; all the while Baumer is the one who knows. And what he knows is that they know nothing.

All Quiet On The Western Front is presented an aspect ratio of 1.78:1. The 1080p image is arrived at with an AVC MPEG-4 codec at an average 25 mbps. This was originally a made for television film and was broadcast and originally released in home video in a full-frame format. It’s been too long since I’ve seen the film from other sources to be able to state with any certainty that the image wasn’t cropped to get the widescreen image presentation. There aren’t any obvious examples, and I never got the feeling I was missing information on the sides. With that said, there are likely instances of cropping even if this was remastered from the original 35mm negative. Surely there would have been issues with crew or production equipment in a shot that was not originally intended to be seen. With all of that said, the high-definition image presentation basically preserves the original look of the film. There’s grain that should be there, allowing for an organic feel. The film suffers a few artifacts of dirt or scoring. Mostly it’s a pretty clean print. Color is very typical of the 70’s film stock common to productions of the time. Honestly, what modern filmgoers might consider flaws only add a certain atmosphere of authenticity to the final image here. There are obvious efforts to clean up the rough spots, and it stands as extremely watchable in this current condition.

The DTS-HD Master Audio 2.0 is certainly faithful to the original mono. It merely spreads the single channel out a bit and makes the film appear more dynamic in the audio presentation. Dialog is clear except where it might not really be intended to be clear. There’s not a lot of pop in the subs, but it’s a worthy tradeoff to preserve the original sound with clarity approaching modern standards.

The film contains some historic perspective of its own. It was less than a decade earlier that the Vietnam War brought the first war images to American living rooms and changed our own perspectives forever. It’s unlikely that this did not play some role in the direction of this version of the film. It serves as an extension of our first vicarious experiences of war in this country. That was the real thing. All Quiet On The Western Front accomplishes nearly the same objective, and “that’s just a taste of the real thing”.

Gino Sassani is a member of the Southeastern Film Critic's Association (SEFCA). He is a film and television critic based in Tampa, Florida. He's also the Senior Editor here at Upcomingdiscs. Gino started reviewing films in the early 1990's as a segment of his local television show Focus. He's an award-winning recording artist for Omega Records. Gino is currently working on his 8th album Merchants & Mercenaries. Gino took over Upcomingdiscs Dec 1, 2008. He works out of a home theater he calls The Reel World. Favorite films: The Godfather, The Godfather Part II, The Body Snatcher (Val Lewton film with Karloff and Lugosi, not the pod people film), Unforgiven, Gladiator, The Lion King, Jaws, Son Of Frankenstein, The Good, The Bad And The Ugly, and Monsters, Inc.
Mutant Planet: Season 2 Borderline