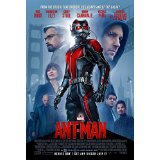 “Just imagine…a soldier the size of an insect.”

The Marvel Cinematic Universe is now seven years into an unprecedented run of success. It’s a consistent, well-oiled machine that has engendered enough goodwill to allow the company to take chances on properties that were previously considered deep cuts. (Before last summer, most people’s reactions to Guardians of the Galaxy likely would’ve been, “Who?!”) Then again, if you believe in the idea of a “Marvel machine,” it could just as easily conjure something heavy or mechanical. As a result, the thing I enjoyed most about Ant-Man is that it felt refreshingly (and appropriately)…small.

Of course, Ant-Man isn’t exactly a “deep cut” to comic book fans. The character was created by Jack Kirby, Larry Lieber, and Stan Lee (keep your eyes peeled for Lee’s customary cameo) and made his comic book debut in 1962’s “Tales to Astonish” #35. Several characters have taken on the Ant-Man mantle but the original iteration was brilliant biophysicist Hank Pym, who developed a chemical substance — dubbed the “Pym Particle” — that allowed him to alter his size. Together with his partner-in-more-ways-than-one Janet van Dyne, Pym was a founding member of The Avengers. (Pym is also the one responsible for creating a little menace called Ultron.)

Although Ant-Man opens with a quick scene featuring Pym (Michael Douglas) arguing about the application of the Pym Particle with some key MCU players, the movie largely centers around gifted cat burglar Scott Lang (Paul Rudd). When we meet Lang, he is finishing out a prison sentence for pulling off a near-impossible heist. (We’re told Lang only robs selfish billionaires, lest you find him less than heroic.) Lang is determined to walk the straight-and-narrow path for the benefit of his daughter Cassie (the impossibly adorable Abby Ryder Fortson). But when he is presented with a lucrative score, Lang gives in to temptation and teams up with his rag-tag crew (Michael Pena, T.I. “Tip” Harris, and David Dastmalchian) to break into a safe.

The job unexpectedly puts Lang on a collision course with Pym…and his own heroic destiny. Pym recruits Lang to be the new Ant-Man, much to the chagrin of Hank’s daughter Hope (Evangeline Lilly). More specifically, Lang is tasked with helping steal the size-altering technology developed by Darren Cross (Corey Stoll), Pym’s former protege. After many unsuccessful attempts, Cross is close to replicating the Pym Particle. However, instead of using it to save the world, Cross wants to militarize his Yellowjacket suit and sell it to the highest bidder.

“I think our first move should be calling The Avengers.”

As Warner Bros. scrambles to throw every marquee DC Comics superhero under the sun into next year’s Batman v. Superman: Dawn of Justice, Marvel simply continues to hum along. Ant-Man marks the conclusion of MCU’s Phase II. It is the 12th film in a shared cinematic universe that kicked off with 2008’s Iron Man. Ever since Samuel L. Jackson’s Nick Fury mentioned “the Avengers Initiative” in Iron Man‘s post-credits sequence, each subsequent movie has partially served to tell a larger story. The scope is undeniably ambitious, but the required connections run the risk of making the movies feel a bit homogenous. (About half of the MCU films end the exact same way: our heroes battle an overwhelming force in and above a crumbling metropolis.)

The mano-a-mano climax of Ant-Man, on the other hand, is comically compact: it largely takes place in a single bedroom inside a single house. And by clocking in at just under two hours — 117 minutes, to be exact — Ant-Man is also much brisker than your average summer blockbuster. (It feels like I’m *still* waiting for that last Transformers movie to end.) Considering the relatively lean running time, Ant-Man is a decently coherent amalgamation of the character’s history. (Although Lang and Cross battle in the comics, Pym was actually the first one to take on the Yellowjacket alias.) The nimble pace also serves the story because Ant-Man is basically a jaunty heist movie in a “superhero movie” costume. But people who have invested heavily in the MCU shouldn’t worry: the lighter tone actually makes the moments where the grander, Avengers-related material inevitably pops up feel more like a pleasant surprise.

There are drawbacks, however, to moving so quickly. The pace in Ant-Man sometimes feels rushed, particularly during early scenes where we’re still getting to know the characters. (Despite an attempt to explain his instability, Cross goes from zero to psycho in a hurry.) It makes sense when you consider the production of the film itself was famously hurried and harried.

Filmmaker Edgar Wright (Shaun of the Dead, Hot Fuzz) spent the better part of a decade developing Ant-Man as a movie — including playing a major role in casting and breaking the story — before abruptly exiting the project last year. (Meanwhile, the studio refused to push back the film’s release date.) It wasn’t an unprecedented move within the Marvel-verse, but it still proved deflating for Wright fans eager to see his gonzo vision on the largest (yet smallest) of scales. Fanboy fears weren’t exactly assuaged when Peyton Reed (best known for directing Bring It On and The Break-Up) was announced as Wright’s replacement.

The good news is Ant-Man has plenty of personality; it’s just a little tricky determining whether that personality belongs to Wright or Reed. (Or maybe even Rudd, who shares a co-writing credit with his Anchorman director Adam McKay, along with Wright and Joe Cornish.) Ultimately, it doesn’t really matter because what we see on-screen is thoroughly entertaining.

Rudd becomes the latest “unlikely” Marvel superhero. (A trend that began with the at-the-time risky casting of Robert Downey Jr. as Tony Stark.) The charming, irresponsible Lang is a good fit for Rudd, who has been a reliably likable presence at the movies for 20 years. Despite some tender moments with Lang’s daughter, the part doesn’t ask Rudd to do much outside his nice guy/smart-aleck lane. (The actor does get the obligatory, gratuitous shirtless shot that shows how much he worked out for the role.) It’s actually a pretty reactionary performance. Reed uses distorted sound effects and forced perspective — along with oodles of CGI, of course — to show how disorienting Lang’s world becomes once he’s miniaturized. The director also does a decent job of giving Lang’s insect companions some personality, especially a flying ant Lang calls “Ant-ony.”

When he’s not reacting to CGI ants, Rudd is playing off Douglas, whose movie star presence helps sell the idea that Dr. Pym was a big deal back in the day. It’s a feisty, forceful performance that also fills in the blanks on a legendary comic book character whose exploits we may not ever get to see on the big screen. Rudd also spars quite nicely — literally and figuratively — with Lilly, whose severe haircut handles most of Hope’s characterization early on. Fortunately, Lilly shines when Hope softens, which gives the actress gets an emotional arc to play. I can’t say the same for Stoll, who does some entertainingly arch work, but ultimately joins a surprisingly long list of mediocre MCU villains. (Only Tom Hiddleston’s Loki and James Spader’s Ultron were standouts; I also have a personal soft spot for Jeff Bridges’ Obadiah Stane.) There are other good performers here — like Judy Greer, Bobby Cannavale, and Wood Harris — but the movie is nearly stolen (ha!) by Pena’s gleeful, motormouth thief.

Of course, there are also some appearances by a few recognizable superheroes that I won’t spoil here. You know the drill by now: keep your backside in your seat once the credits start rolling. You’ll be treated to a scene that hints a new hero, and a second one that directly connects Ant-Man to next year’s Captain America: Civil War. The latter film is shaping up to be quite the Marvel superhero bonanza, with several Avengers — and the newly emancipated Spider-Man — slated to appear. (It’s being called, somewhat derisively, Avengers 2.5.) Don’t get me wrong: I’ll be lining up to see that upcoming spectacle for sure. But until then, I totally enjoyed the comparatively modest charms of a movie about “breaking into places and stealing s—.”