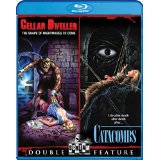 “The devil can touch you and leave his mark. Just so he doesn’t steal your soul.”

You might say that the devil made them do it. Shout Factory utilizes their Scream Factory moniker to deliver another doubleheader horror-fest from the 1980’s. Many of us love to be touched by a little evil, so long as it’s some harmless fun from a horror movie. While I’m not a huge fan of having two or more films on one disc, this pretty much amounts to the same as the standard four episodes on a disc that you’ll find in many television releases in high definition. So, for the sake of a little nostalgia and the fact that these prints aren’t what you would call pristine or high-budget, I’m going to get on board another Scream Factory ride.

“He who has wisdom, wonders not of the beast, for nothing in hell lives without man’s consent. Woe unto you that gives the beast form. To contemplate evil is to ask evil home.”

It all starts with a 1950’s style horror comic artist Colin Childress, played by a young Jeffrey Combs. He’s considered one of the best, and he creates a magazine called Cellar Dweller, hence the title of the film. But he’s not content to draw and write about the dark arts. He decides to dabble in those very murky waters himself. With an incantation he brings his work to life… literally. A young girl is killed by his imagined beast, and he learns instantly that he doesn’t control the power. It controls him. He ends up burning down his studio and killing himself in an attempt to put a stop to the evil he summoned.  Followed by rather lengthy opening credits that pay homage to the comic images that inspired the film, we’re taken 30 years later into the present of the 1980’s, the same kinds of images that inspired HBO’s Tales From The Crypt and Stephen King’s Creepshow franchise of films.

The artist’s home has now been turned into a colony for artists, a school or institute of sorts. It’s all run by Lily Munster Mrs. Briggs (De Carlo) who takes an instant dislike to new arrival, Whitney Taylor (Farentino).  Colin Childress has been an idol to Whitney, who has applied here to follow in his footsteps. Of course, she’s going to follow in more ways than she suspected. The board forces Whitney on Briggs because they see some potential in an artist that was inspired by the man who once created in these very walls. In addition to Mrs. Briggs, Whitney also discovers her old art school rival Amanda (Bellwood). Those two conspire to rid the colony of Whitney.

The colony also includes the collection of teen fodder. Phillip (Robbins) is an abstract painter who thinks he’s a lot cooler than he is. Lisa (Wilson) is a performance artist and befriends Whitney. The cast also includes the older veteran Norman (Edwards) who sees himself as a modern-day Raymond Chandler and often acts out his plots when he’s stuck for ideas. He also believes he’s a film-noir-style detective and puts his nose into things that end up with fatal consequences.

Of course, Whitney forces her way into Childress’s old basement studio and attempts to revive the style and the magazine. She also stumbles into the incantation and unwittingly gets a few people killed. It’s no spoiler that her first target would be Amanda. Whitney thinks it’s just an artist’s way to work out some hostility. She finds out the hard way what her idol did 30 years ago.

The film is actually quite entertaining and is a pretty solid horror film when it wants to be. Unfortunately, there’s a bit too much camp and silliness thrown into the mix. When Amanda’s trying to escape the beast, she trips on a suddenly-appearing banana as Whitney’s drawing out her demise. Boing sound effects as a doorknob disappears on cue lend more levity than scares, and it’s really too bad. The film has a nice style and atmosphere that are too quickly ruined by the reaches into comedy.

The creature itself is not bad. It appears to be part costume and part animatronics puppetry. With some nice lighting effects, it’s an effective creature. The design itself looks like something out of Tales From The Dark Side but the common inspiration sources likely account for that more than anything else. Of course it’s low-budget, but there’s some meat to this monster.

Finally, the end credits tip their hat to the old classic Universal horror films with the heading: “A good cast is worth repeating”.

“Dare you enter the labyrinth?”

It all starts in the Abbey of San Pietro in 1506. The monks are trying to exorcise a demon from an albino chained to the catacomb walls. You get the requisite curses and demonstrations of power, but this demon doesn’t spit up pea soup. This one spits acid. The monks are forced to give up and seal the demon and his host in a tomb protected by the seal of the Vatican. No worries, right?

Jump ahead nearly half a millennium and the monks are still staying at the abbey. Enter Elizabeth Magrino (Schaefer) who has come by invitation of Brother Superior Orsini (Abercrombie) to study and photograph the catacombs. She’s a teacher at a Catholic school and shares an acquaintance. This doesn’t go so well with some of the other monks, particularly Brother Marinus (West) who spouts such welcoming remarks as “evil thy name is woman”.

There’s also Father John, played by Timothy Van Patten, who provides a little flirtation for Whitney. He’s there to comfort an old dying priest who appears to be there only as a vehicle for Fr. John to be there at all. You would think the old guy would be there to provide warnings or sage words of advice. The only real conversation he has is about his regrets at not having sex with a 16-year-old before he became a priest and hoping he’s about to have great sex with God. Yeah, that’s what I thought, too.

That’s not the only scene to cross a bit of a taboo line. In one scene Christ climbs down from the cross to do away with a brother with the nail he pulled out of his feet. It’s actually an effective image; some might consider it a tad too much.

The movie also demonstrates that you don’t need a terrible amount of effects or set pieces to do a good job. One of my favorite finds a monk pulled into an open grave by what could be the albino’s hand. Once there, the dirt pulls itself in from all sides. It’s simple, but a very creepy scene. To top it off, pun intended, a cross grave marker pops out of the filled grave.

The truth is that this is not so much a monster movie as a possession film. We don’t see the crazy demon albino again until the climactic fight at the end of the film. The possession follows through the characters. You can tell by the handy black eyes provided so you can know the demons without a playbook.  Most of the time the film relies on the atmosphere of the titular catacombs themselves. Sure, they use the standard tricks: shelves lined with bones, particularly skulls, rats, and the old snake-moving-through-the-eye-socket trick. Indiana Jones would be proud.

The performances are above average. Timothy Van Patten is actually the weakest of the characters here. Go figure. Ian Abercrombie as the Brother Superior is wonderful. Laura Schaefer  is pretty outstanding as Elizabeth. She gets to take a turn at possession and pulls it off quite well. I’d give her the compelling performance on the two-film disc.

These films are both presented in an aspect ratio of 1.78:1. The 1080p image is arrived at with an AVC MPEG-4 codec at an average 25 mbps. It’s not quite original for either film. Both films are listed as originally 1.85:1. There’s no real effort at restoration. The idea is to keep this cheap. The high-definition image presentations live up to what they were originally. There’s grain that should be present. The 80’s film stock provides the color palette, and there are artifacts on the prints. Mostly they are clean and don’t have enough issues to distract. If you’re going into this looking for video quality, you’re in the wrong video section anyway.

The DTS-HD Master Audio 2.0 is basically mono and suffers from distortion when you hear screams or music that leans toward the higher ends. You can hear the dialog, and I wouldn’t expect anything more.

There are two common themes to this collection. Both films are from 1988, and both films are joint Italian films. The Spaghetti Nightmares were becoming popular in America in the 1980’s. It’s no wonder that production companies would try to capitalize on the trend. Of course, these films don’t represent that genre at all. These are far too tame, and you won’t find any names close to Bava, the Argentos, or Fulci here. These films are far from masterpieces. They have serious flaws and serve here merely to provide some inexpensive entertainment. In this job we get to see the masters at their finest. We also get to see the morons at their worst. “That’s an unfortunate part of our calling.“

Gino Sassani is a member of the Southeastern Film Critic's Association (SEFCA). He is a film and television critic based in Tampa, Florida. He's also the Senior Editor here at Upcomingdiscs. Gino started reviewing films in the early 1990's as a segment of his local television show Focus. He's an award-winning recording artist for Omega Records. Gino is currently working on his 8th album Merchants & Mercenaries. Gino took over Upcomingdiscs Dec 1, 2008. He works out of a home theater he calls The Reel World. Favorite films: The Godfather, The Godfather Part II, The Body Snatcher (Val Lewton film with Karloff and Lugosi, not the pod people film), Unforgiven, Gladiator, The Lion King, Jaws, Son Of Frankenstein, The Good, The Bad And The Ugly, and Monsters, Inc.
Pretty Face is Going to Hell: Season 1 Ant-Man