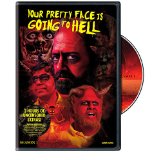 Gary is a low-level demon trying to find different ways to make it up the corporate ladder in hell. He is also a slacker who doesn’t know the first thing about being a demon, despite his length of time in hell. Claude is a new demon who is sent to intern for Gary but ends up outshining him. As Claude rises to the top, Gary must attempt to gain some sort of recognition for his years of servitude to the dark lord, lest he be forced to shovel coal into hell for eternity. This show isn’t one of Adult Swim’s funniest creations, but it is still funny. This isn’t going to be an instant favorite of mine, like Metalocalypse or Too Many Cooks, but it was a nice watch nonetheless. Gary is one of the most laughably pathetic characters I have seen in a while. It is funny to see him as a “too nice for hell” type, like when Gary refuses to play dirty to win a competition that would give him a water cooler in hell. Satan is a great boss that everyone can find something of their own boss in, and can easily invite the phrase “dude, my boss is the devil.” I found that the scene I identified with the most was when Satan walked Gary down the hall into the break room, and Gary knew what “the break room” meant so he tried to find every excuse not to go. The great part about Satan in this is that you never forget that Satan is the ruler of hell. He never turns out to be nice like the devil in Bedazzled, but he also doesn’t beat you over the head with evil like… well any other movie featuring the devil as an antagonist (let’s say End of Days?). He is the secret jerk character, the character that you think is kind of nice and may have gotten a bad reputation, but then reminds you of why he got that reputation by putting you through…hell.

While this show made me think of how my boss might have been the devil, it did nothing to attach me to the other characters in the short run of six episodes. At the beginning I wanted Gary to get what was coming to him; by the end I wanted Gary to get what was coming to him slightly less. Claude was the perfect company stooge, but that is the problem. I don’t think a company stooge should be an antagonist if that stooge is simply better at his job than the protagonist. Sure, Claude messed Gary over a few times, but I kept thinking, “this is hell, that is what you are supposed to do in order to get to the next level.” I had a problem with the balance of intelligence too. What I mean by this is that there are smart characters who have really dumb moments, and dumb characters who stay dumb throughout the show, like when Claude wins a contest to collect as many souls as he can, he should have recognized that the prize for this contest was more torture.

I think my favorite episode of this was “People in Hell Want Ice Water” (it was between that and “Bone Garden.”) This episode gave me a chance to see the characters actually develop into something more than what I was shown for the past five episodes. I got to see that Claude was “the demon for this day and age type” when he made a computer program that gathered souls for him. Gary remained stupid, but helped garner suspicion as to why he was actually in hell when he wouldn’t steal the competition from Claude. “Bone Garden” was great for a few laughs because of the whole girlfriend bit, but this added laughs and context which I always appreciate.

This show is a funny watch for only a few hours, but has some major flaws. I wouldn’t rush out to get this, but it might be worth it for a lazy day of sitting around all afternoon watching cable.