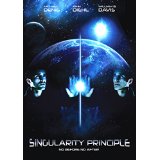 The Singularity Principle has two recognizable character actors, John Diehl (Miami Vice, The Shield, Escape From New York, Stripes) and William B. Davis (the smoking man from The X-Files), but is a low-budget Canadian production. It was filmed at the Canadian light source Synchrotron in Saskatoon, which adds considerably to its production value. It is a believable technical and scientific workplace. The film is co-written and directed by physicist Dr. David Deranian and is very focused on the scientific aspects of the story, at least those are the most successful elements of the film. The story deals with experiments conducted involving the Einstein-Rosen Bridge, which involves what is on the other side of black holes and wormholes. It posits theories of infinite universes with us in it. Infinity is the one concept the challenges our ability to comprehend. We can say we understand infinity but that is only in the most facile and cursory way. Because of infinity, anything is possible.

Dr. Peter Tanning ( Michael Denis) is being supervised in advanced revolutionary experiments by Professor Jack Brenner, played by Diehl. Both Tanning and Brenner have experienced fleeting examples of other dimensions. They are both obsessed, in a purely scientific way, of course. The story is told in flashback while Brenner is being questioned by Lawrence Cason, played by Davis. Cason is part of a mysterious government agency investigating Brenner’s disappearance. It is clear that Tanning has been opening a door allowing alternate versions of himself to interact in this universe.

Since this is a relatively low-budget film, most of the effects are substandard, but the overall writing seems to have a sound scientific backing. It is complete science fiction, because nothing remotely similar has ever been plausibly discussed. It would be exciting if scientists took greater interest in working on movies, because there is so much exciting science going on, especially in the world of quantum physics.

Much of the screen time is devoted to Lyndi Tanning ( Kallie Jean Sorensen), who is bedeviled by different versions of her husband popping around with totally different perceptions of reality, since they come from a another dimension. She is an attractive addition and holds up her scenes with a fair amount of screen charisma for a novice.

Overall, though, the film doesn’t hold up very well. The few effects that are attempted are generally underwhelming and distracting. Too much time is given to story elements that are generic and not enough to the scientific kernels of truth. If there was more science and less melodrama, the whole would be more convincing.

I am interested in these types of films, and there are not enough of them: the kind of films that deal with scientific experimentation that delves into the unknown fringes of what we know. The television show Fringe and the big-budget Interstellar were two of the most successful attempts do this sort of thing. I would give The Singularity Principle an A for effort and a C for execution. If this was properly funded, it might have done better.

Mr. Holmes The Legend of the Lone Ranger (Blu-ray)