The Legend of the Lone Ranger (Blu-ray) 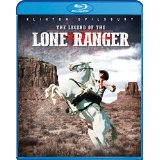 “Who is that masked man?”

That’s actually a loaded question when it comes the famously troubled 1981 film The Legend of the Lone Ranger. It obviously refers to the masked former Texas Ranger who battles outlaws in the Old West, but it also applies to star Klinton Spilsbury, who never made a movie after this one. The question could also be a nod to the producers of this film suing actor Clayton Moore — who famously played the Lone Ranger on TV and film in the 1950s — to prevent him from appearing as his signature character in public. Unfortunately, none of that fascinating information is included (or even hinted at) on this bare bones Blu-ray.

“The legend started simply, just a boy without a home. Taken in by Indians, but still pretty much alone.”

Before we get to the juicy stuff, we should talk about the film itself. If this movie had been made in the past decade it would’ve been labeled a “reboot.” The Legend of the Lone Ranger is the origin story of John Reid, who witnesses the brutal death of his parents at a young age. John, who had previously helped a Comanche boy named Tonto out of a pinch, is adopted by Tonto’s tribe until older brother Dan (John Bennett Perry) collects him and sends him away to get an education.

As an adult, John (Spilsbury) is an attorney who returns to the crime-ridden town of Del Rio, which is under siege by an unhinged and land-hungry military man named Butch Cavendish (Christopher Lloyd). Cavendish is intent on silencing anyone who challenges his ultimate scheme of forming new country called the Republic of New Texas. One particularly nasty ambush by Cavendish’s men results in the death of a group of Texas Rangers, including Dan. John barely survives and is rescued by his childhood friend Tonto (Michael Horse), who helps him hone the skills necessary to fight Cavendish’s forces. Eventually, John decides to bury his past life as John Reid, don a mask, and become the Lone Ranger. But when Cavendish kidnaps Ulysses S. Grant (Jason Robards), will the Lone Ranger prioritize revenge over rescuing the U.S. president?

It’s not hard to see why The Legend of the Lone Ranger was ultimately a misfire. (The movie grossed just $12 million versus an $18 million budget.) By the time the movie was released in 1981, Westerns were no longer in vogue on TV or at the movies. In fact, some of the violence in this film — especially the early murder of John Reid’s parents — is surprisingly bracing and considerably more intense than what Lone Ranger fans had been accustomed to on television. I actually think it was an effective way to separate this version of the story from what some viewed as a musty predecessor. On top of that, this movie — which counted Monument Valley among its filming locations — boasts some impressive production values and eye-popping stunt work. Then again, one thrilling stagecoach sequence almost resulted in the death of stuntman Terry Leonard; the scene where he maneuvers himself under a bunch of horses made the final cut, but at what cost?

Of course, that was just one of several off-screen issues to plague this film. Many Lone Ranger fans soured on the project when producers sued Moore and prevented him from wearing the iconic mask in public. It was meant to shut down the threat of Moore undermining the character in the film, but it also turned fans against this movie before it even went into production. Naturally, there are also on-screen reasons that this movie failed. (And I’m not just referring to the drawn-out, slow-motion sequence where Reid tries to break in the wild horse he names Silver.) Chief among them is Spilsbury, who certainly looks the part of a Western hero, but is more wooden than the spoke on stagecoach wheel. He was so bad — Spilsbury refuses to talk about his experience making this film — that all of his dialogue was dubbed in post-production by actor James Keach. As a result, I’m not sure who deserves credit/blame for the painfully flat line reading of the Lone Ranger’s most iconic line, “Hi-yo, Silver! Away!” (The fact that the film repeats the same recording of the line several times only compounds the problem.)

It’s too bad because despite some missteps — the movie’s relatively serious tone is periodically interrupted by sing-songy narration courtesy of Merle Haggard — there are a few things to like here. (Even Haggard’s music would be a pleasing addition to a more suitable project.) Horse isn’t that much better of an actor than Spilsbury, but there is an effort here to make Tonto more eloquent and more of an equal. (And it’s done without going overboard, ala telling the story from Tonto’s perspective in the 2013 adaptation with Johnny Depp.) Lloyd — still a few years away from his signature role as Doc Brown in Back to the Future, but right in the middle of his run as “Iggy” Ignatowski in Taxi — brings his usual crazy-eyed intensity to Cavendish, even if it’s kept at a simmer. And Robards brings such an effortless spark to U.S. Grant that you wish he’d shown up with more than 30 minutes to go in the flick.

I referenced 2013’s The Lone Ranger, which was an infamous bomb in its own right. The Legend of the Lone Ranger, a production that seemed doomed from the start, is not quite as bad as its reputation. (Neither is the Depp version, in my opinion.) It does, however, serve as a reminder that Hollywood has been failing at making a successful Lone Ranger movie for more than 30 years now.

The Legend of the Lone Ranger is presented in an aspect ratio of 2.35:1. The 1080p image is arrived at with an AVC MPEG-4 codec at an average of 23 mbps. Panoramic Westerns of this ilk — especially ones that feature breathtaking shots of Monument Valley — should *only* be shown in wide aspect ratios, and thankfully this Blu-ray obliges. Unfortunately, that’s pretty much the highlight of this visual presentation. The image generally looks washed out, particularly during the early scenes with John Reid as a boy. Even if you chalk that up to using a different visual palette to convey his childhood, the rest of the film has some consistent aliasing and banding, which are especially evident in some shots of the clear blue sky. The good(ish) news is that flesh tones are appropriately warm, and the washed-out dustiness actually serves the film. (I like to imagine it was due to all the dirt kicked up by the constantly galloping horses.)

The DTS-HD Master Audio 2.0 track is solid and features some bursts of power, despite its obvious limitations. I was particularly impressed by the depth and breadth of Haggard’s balladeering, especially for the theme song “The Man in the Mask.” There is also little-to-no evidence of popping and hissing in this clear-sounding track. But despite its admirable faithfulness, I couldn’t help but long for some thunderous support from the subs during any chase on horseback. I also reckon the Lone Ranger’s theme — the William Tell overture — would’ve sounded even more rousing with a modern track.

This is certainly a case where the back story surrounding the making of a film is infinitely more fascinating than the movie itself.

Unfortunately, this new Blu-ray release completely — yet understandably, given the hurt feelings — ignores the behind-the-scenes aspect of The Legend of the Lone Ranger. The problem is the A/V upgrades aren’t strong enough to make up for that shortcoming. For those reasons, I can’t recommend you pick this title up; at least not for reasons that don’t include morbid curiosity.