Posted in: Disc Reviews by Archive Authors on July 22nd, 2015 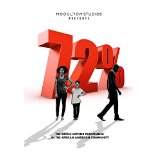 This is a documentary on the growing concern for the rising number of African-American children being born into unwed households. The film’s title 72% is a statistic of how many African-American single mothers are currently living in America. The documentary asks scholars and television personalities for their take on the growing crisis among the community. I feel I must make this quick addendum: as a white male I can only take this movie for how I saw it and how it made me feel. I am aware that I am not necessarily the target audience intended for this documentary, but it was a good watch besides.

This movie was eye-opening, and I feel it should be given out to anyone at risk of contributing to this statistic. The topic was tastefully handled, offering alarming facts and justifiable opinions. They start by introducing us to a single African-American mother; then we check in on her as the movie continues. It was a great move by the filmmaker to actually show the audience what a single African-American mother goes through in her day to day, while we listen to people of credit giving their opinions and facts. It makes me more emotionally invested in the documentary when I can see/follow around the people they are talking about. They break down the movie into sections on what theories are being brought to the table and how it is affecting the community as a whole. The movie talks about the family relationships in Africa as compared to the post-slavery world of America; this gives me some insight on it being an American issue, not a global issue, which I appreciate. Then we go into how the entertainment world is starting to glorify “baby mamas” as a whole with shows like Maury and All My Baby’s Mamas, which I can definitely agree with. There actually isn’t too much I can’t agree with in this movie. I may only be able to relate his as the son of a single mother, but it made some amazingly valid points. A child with two parents has a better chance than a child being raised by one. A father is there to help rear the children, and for him to be a role model. These are things that most people could agree with, and the best part is that the documentary never says “women aren’t capable.” There are plenty of women capable of raising children on their own; this is about the growing concern that these women shouldn’t have to.

Not only is the message here agreeable, the directors are almost flawless in their execution. The scenes blend seamlessly into each other, and I’m never bored watching the documentary. The interviews are all in good taste and represent each person being interviewed with dignity. It does take a few shots at pop culture, but since it pertains to the film and strengthens certain arguments, I can’t hold that against it. This is the pinnacle of a professional documentary. No one is really vilified, and everyone is presented so that their position is heard.

I deeply enjoyed this movie and I think anyone else would too. It is a thought-provoking documentary that demonstrates class.