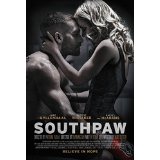 Come on, it’s the fight game. Warren Zevon said it best when he told us the name of the game was to be hit and hit back. If Southpaw highlights anything about the fight game, it’s that basic principle. Director Antoine Fuqua makes sure that we see the physical toll of a fight in all its slow motion and gory detail. Such painful detail can be tiresome if there isn’t something else to balance the experience. Southpaw certainly has that. But is it really enough?

Billy “The Great” Hope (Gyllenhaal) is the lightweight champion of the world. As the film open we watch him defend his title in the ring. The real purpose of the fight is to set up his fighting style. Hope is the kind of fighter who takes a beating and doesn’t get fired up until he’s a bloody pulp. Then he executes his strength to its fullest and batters his opponent senseless. It allows a rather luxurious lifestyle for him, his wife Maureen (Adams) and daughter Leila (Laurence). But Maureen worries about the beating he’s taking and pleads for a break. On the other side is his business manager Jordan (50 Cent) who is pushing a huge $30 million deal. There’s also pressure from fighter Miguel “Magic” Escobar (Gomez), who shows up at his fights and appearances to taunt him into giving him a shot at the title. It’s one such encounter that sends Hope’s world upside down and spiraling into a pit of…well… hopelessness.

Soon he’s flat broke. His manager has abandoned him for Escobar, and Children’s Services has taken away his daughter because of his irresponsible behaviors. Now he’s in for the toughest fight of his life to get himself back on track and get his daughter back.

Enter trainer Tick Wills (Whitaker) who Hope respects because he once trained the only fighter he thought beat him. Of course, the fight was fixed and Hope won anyway. It probably wasn’t a great idea to tell Wills this while asking for a job at his gym. The two form an uneasy relationship built on both of their hard luck. Now we watch as a life that came tumbling down gets off the mat and begins to climb back up. It all leads to the inevitable clash in the ring between Hope and Miguel, who he blames for the loss of his wife.

I’d like to tell you that Southpaw bypasses the usual fight movie conventions and offers a truly new and original perspective on the popular genre. I’d really like to, but you see, I’ve made a commitment here not to lie to you guys. They’re all here. Pretty much every fight cliché from every fight movie in cinema history can be found somewhere along the way. And it started with such promise. I was particularly interested in the story between Hope and his daughter. There was some fight movie gold to be mined here and if you watch the trailer it sure looks like that’s the point of the film. Instead it’s treated more or less as a plot device with some wonderfully emotional moments but with plenty of potential out cold on the mat. It also wastes the talents of young Oona Laurence, who shows us pretty early on that she can absolutely go the whole 12 rounds. But alas, room must be made for such important elements like the training montage. Also wasted here are the talents of Forest Whitaker, who comes in far too late and gets just enough screening time to make us crazy for more.

It doesn’t help that the script by Kurt Sutter of The Shield and Sons of Anarchy fame telegraphs its punches…badly. I’m a huge fan of Sutter’s television work, but he’s out of his element here. Not only is the script too predictable, but Sutter has a huge trouble with timelines. It’s something he can do well on television, but not here. It’s hard to believe that within months of his last fight Hope is so dead broke (with apologies to the Clintons) that he loses literally everything and ends up in a tenement-style apartment. Yes, athletes to often have reputations for blowing through their money, but Hope wouldn’t have had a fight in this time anyway. There might be a hint that his manager might have been stealing his dough, but even a punch-drunk fighter should see it vanishing that quickly. It’s the same with Hope’s overall downward plunge. Sutter and Fuqua compress it so much that it strains believability recklessly.

It’s entertaining throughout, but something has to be wrong when you can have such powerful performances by the likes of Jake Gyllenhaal and Forest Whitaker and end up with such an average movie. It’s a powerful film with a glass jaw that keeps it from ever living up to its potential. All the pieces are there for the knockout, only to end up with a split decision.

Enough can’t be said about Gyllenhaal’s performance. From the first shots of him in the ring he looks ridiculous and out of place there… or at least he should. There’s nothing about Gyllenhaal’s look that resembles a boxer. There’s no beef-up like DeNiro pulled off for Raging Bull. And he certainly doesn’t have the natural look of a Stallone. Still, within a short time we start to believe that Hope really is a boxer, and Gyllenhaal does it by sheer acting skills alone. While he may not have put on the pounds to prepare, he throws himself completely into the roll as he’s done in the past. It might not be the kind of transformation he delivered in Nightcrawler, and it won’t hold up to Mickey Rourke’s Wrestler delivery. But he pushes us over into belief by willpower alone. He also does a remarkable job sharing screen chemistry with both Whitaker and young Laurence. It only makes us more wishful that the story had taken a more character-driven path. Even Rachel McAdams manages to leave a lasting impression with a short-lived role. It’s all right there. Just out of reach.

Fuqua’s style relies too much on trying to overcompensate for the weak script. He attempts to milk the drama and action moments with a sort of hyper-realism that works at times, while at others it becomes a distraction. It’s a simple case of trying so hard that it shows. He should have put more effort into fixing serious plot holes and awkward pacing. The film races to the cliché rematch and a predictable conclusion. OK, the rematch is more philosophical this time. Hope and Escobar hadn’t met in the ring before. But let’s be honest, they had their fight, and Hope lost. He lost more than any fighter ever did in the ring. This is a grudge match all the same, and neither Sutter or Fuqua had the courage to make a bold choice. In the end it’s the audience that takes too many blows. Fuqua knows how to make a pretty good movie. We’ve seen a couple. “But he also drops bombs.”

Gino Sassani is a member of the Southeastern Film Critic's Association (SEFCA). He is a film and television critic based in Tampa, Florida. He's also the Senior Editor here at Upcomingdiscs. Gino started reviewing films in the early 1990's as a segment of his local television show Focus. He's an award-winning recording artist for Omega Records. Gino is currently working on his 8th album Merchants & Mercenaries. Gino took over Upcomingdiscs Dec 1, 2008. He works out of a home theater he calls The Reel World. Favorite films: The Godfather, The Godfather Part II, The Body Snatcher (Val Lewton film with Karloff and Lugosi, not the pod people film), Unforgiven, Gladiator, The Lion King, Jaws, Son Of Frankenstein, The Good, The Bad And The Ugly, and Monsters, Inc.
Ex Machina (Blu-ray) White God (Blu-ray)