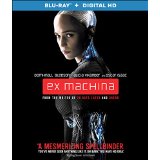 “You wanna see something cool?”

If you’re old enough to remember audio tape, you might be old enough to remember Memorex. If you remember Memorex, you should recall their popular slogan: “Is it live or is it Memorex?”. Of course, the idea was that the tape quality was so good you couldn’t distinguish it from the real thing. What if robotics and artificial intelligence reached that same plateau? The point where you could not tell the difference between an actual human being and an artificial one. The threshold is determined by something called a Turing test. And that’s exactly what writer/director Alex Garland presents you the audience with in Ex Machina. The question is, did it pass?

Caleb (Gleeson) is a coding engineer for the world’s most sophisticated internet search engine, Bluebook. Think of it as Google on steroids. He has just won a company contest to spend a week at the isolated and massive estate of the company’s eccentric CEO Nathan (Isaac). I’m not really giving anything away by revealing that the contest was a ruse to bring Caleb there to participate in a Turing Test. Nathan has created an android with the extraordinary ability to mimic a human being. Her name is Ava (Vikander). Is she self-aware? Can she make Caleb forget she is a machine and begin to “feel” as if he’s interacting with a human being? That’s the essence of the test and the road to trouble.

Alex Garland has a relatively small budget with which he must deliver a convincing science fiction film with rather incredible elements. The real Turing Test for us as viewers is whether or not we believe, not that Ava is self aware, but that Garland delivered a story in a world that we believe can actually exist. It will all depend on a handful of crucial decisions, all of which will combine to make or break this test.

Like most films, it all begins with the cast. Most people likely know Domhnall Gleeson from his role of Bill Weasley on the Harry Potter films. I fell in love with his talent in About Time. There was a film filled with atmosphere and emotion. Apparently, it’s the kind of film Domhnall is particularly adept at. This is another performance where nuance in the performance is the difference between an OK performance and a captivating one. Then you place him opposite the young Alicia Vikander as the android Ava. It’s another crucial decision that will make or break the film. It’s good that Garland found an actress who was not terribly well known but had the kind of skills that will make her well known in the future. She has to sell this performance with just the right kind of movement that flows naturally enough to convince you of her human ability, but awkward just to the point of keeping the action realistic enough. She has a dance background, which must have helped immensely, because even the simplest of gestures or movement here had to be just so. It’s a choreographed performance, but it can never feel choreographed. Vikander pulls it off flawlessly. Casting the unrecognizable Oscar Isaac as the enigmatic Nathan fills the trio nicely. His character remains a bit of a mystery. Is he really this incredibly cruel person, or is it an act intended to manipulate events to their rather obscure conclusion? I’m still not sure, and I think that’s how it was intended.

These three actors make up pretty much all of the performances. There are a couple of very minor roles, with the possible exception of Kyoko, played by Sonoya Mizuno. It’s best that you discover this character and her arc for yourself, so I’m not going to say anything about the performance other than it reveals what you need to know when you need to know it.

Production design is another of those important choices. Nathan’s domain has the wonderful dichotomy of being expensive and claustrophobic all at the same time. He owns an entire mountainside, an estate that literally takes hours to helicopter across. Within those grounds are huge majestic waterfalls and glacier edges that make the location appear to be endless. However, the house is a sterile ultra-modern environment with locked sliding doors accessible only if you have the correct keycard. That system is another wonderful play of opposites. You have a man with the technological skills to create a human parallel of such sophistication, but his security relies on the ages-old technology of keycards instead of some advanced biometric or more precise technology. Of course, the simplicity of that system plays a key part in allowing some of the plot points to move forward, assisted by mysterious generator failures that all play huge roles in the story. But inside there is a feeling of a bunker and being closed off from everything else. It’s rather tight and a sweet counter to the expanse of this one man’s private little empire.

Of course, the visual effects of Ava are going to be important. The design combines rather simple elements with some complicated computer-generated parts that combine for a very effective look. Ava’s face is vital and completely human. Her hands and feet are the same, as is her upper body. Her limbs and mid-section are transparent and reveal the obvious inner workings of the android. It’s actually quite nice. Garland reveals the most expressive parts of one’s anatomy and those most associated with a human woman. But he teases us with the cold fact of her actual condition. As Nathan does with Caleb, Garland is daring you to feel humanity for this synthesized creature while constantly confronted with the bareness of that fact. The amazing thing is how well it actually works.

Garland continues with the style of having opposite conceptions existing together. When Caleb has his encounters to test Ava, he is in a rather small glass box. It resembles the cage that in reality holds Ava. But the setup gives her the most visual space during the encounters as her “room” encircles Caleb’s interview room. I’m actually quite impressed that Garland managed to pull off these wonderful elements that will feed more into your thought process than actually be noticed.

It all reminds me of one of my favorite original Star Trek episodes. It was called Requiem For Methuselah.  It’s one of the more obscure shows where the crew encounters a man living a life of luxury alone on a planet. Kirk is introduced to his daughter, who turns out to be an android. The “father” was attempting to switch on her ability to love by allowing Kirk to court her without knowing he was with an android. It ended rather unfortunately and brought up many of the same questions about how real an android can be. Data would take those questions farther down the road when The Next Generation came along, as he elicited the questions of what is sentience and should artificial life have rights. Do they have souls? You’ll find yourself asking those same questions here, just as Garland intended.

Ex Machina is presented in its original aspect ratio of 2.40:1. The 1080p image is arrived at with an AVC MPEG-4 codec at an average 35 mbps. The high-definition image presentation looks quite good. The image style continues with the use of contrasting themes. The exterior shots are rich in texture and provide vivid colors. The glacier looks remarkable with the slight traces of blue mixed in with the white and the tactile texture it provides. In contrast, the interiors are rather bleak, and lighting is sparse. The environments are provided to pull your attention to the characters. Ava’s detail is quite startling when you remember this is a budget film. Black levels contain huge depth and provide nice shades of shadow definition. You’ll find flesh tones an important element and their handled well. Ava’s stand out in crisp contrast to the dull surroundings.

The DTS:X defaults to DTS-HD MA 7.1. The film has a pretty marvelous early sequence as Caleb’s helicopter arrives at the estate. The surrounds come alive, and even the subs give a little touch here and there. It’s another study in contrast as the interior scenes focus almost entirely on the clear dialog with quite a bit of silence. Here the surrounds shut down except for the atmospheric score elements. The score goes from simple single-note territory to a Pink Floyd On The Run knock-off that works to build subtle tension. There’s no question that Garland relies heavily on his music to build emotions in the film. It’s almost like another cast member. Those cues can draw your attention and the surrounds are a big part of that element.

Through The Looking Glass – The Making Of Ex Machina: (39:58) Now this is how you make a behind the scenes feature. There are almost no clips. Most of the film’s scenes are presented through production footage of the scene’s creation and not the standard repeated material. There is some, but it’s never as intrusive or redundant as is business as usual on these things. The cast and crew provide more than a quick six-second sound bite at a time. There’s real insight here, and you’ll get a lot of production information watching this feature.

Behind The Scenes Vignettes: (28:39) There is a series of short features that were pretty much covered in the first piece. You can use the handy play-all.

You can’t escape the larger philosophical questions here, and the film doesn’t shy away from them. The script is loaded with the conversations that Garland expects you to continue to have. Likely you will. And you’ll find yourself fascinated by what you see. The running time isn’t padded; it’s a pretty solid job of telling the story by providing only what you need. The pace is perfect. If there is any flaw it comes at the film’s conclusion. I’m not a fan of the way it all ends, but I can at least see that particular point of view. You’ll have the perfect opportunity to decide for yourself, because you just can’t afford to pass this one up. If you do, you’ll be sorry. “When you discover what you missed out on, in about a year, you’re going to regret it for the rest of your life.”

Gino Sassani is a member of the Southeastern Film Critic's Association (SEFCA). He is a film and television critic based in Tampa, Florida. He's also the Senior Editor here at Upcomingdiscs. Gino started reviewing films in the early 1990's as a segment of his local television show Focus. He's an award-winning recording artist for Omega Records. Gino is currently working on his 8th album Merchants & Mercenaries. Gino took over Upcomingdiscs Dec 1, 2008. He works out of a home theater he calls The Reel World. Favorite films: The Godfather, The Godfather Part II, The Body Snatcher (Val Lewton film with Karloff and Lugosi, not the pod people film), Unforgiven, Gladiator, The Lion King, Jaws, Son Of Frankenstein, The Good, The Bad And The Ugly, and Monsters, Inc.
Amazing Space: An Audio/Visual Meditation on the Cosmos Southpaw