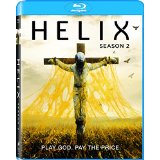 It’s almost upon us. After many long years and two less-than-stellar films, the original X-Files is returning to its rightful place on television. In the years since it left the airwaves, there have been many attempts to recreate its style and place in the hearts of fans. Helix was an attempt to take something that would have been a great X-Files episodes and turn it into a complete series franchise of its own. You remember the scenario. Mulder and Scully would be locked in the arctic where an ancient disease or worm would contaminate the people there. It would be up to these guys to solve the mystery and rescue what was left of the base scientists. Helix played out that very arc in its first season. Of course, there was much more than a disease or organism going on, and the first season turned out to be a rather interesting, if not great, watch. By the time it was over, they had thrown in a highly complicated story involving immortals and a company made up of them who want to control the world. Throw in some zombie-like contaminates, and you had 13 hours of somewhat entertaining television.

It came time for season 2, and the powers that be decided they might not have time to play out whatever other elements they had prepared for the show’s ultimate run. They were absolutely correct, of course. But it didn’t help the cause that someone decided to throw every idea they might have had for the show into one convoluted mess of a 13-hour season. If it had not yet been slated for cancellation, it deserved it by the time these episodes had run their course.

If you are not familiar with season 1, don’t even try to watch this one. You won’t have a clue what’s going on, and the episodes aren’t going to try to help you out. They have too much to do. So you’ll be left behind. If you’re determined to check this out even after reading the review, pick up the first season before you proceed.

For those of you ready to continue, it’s a year later and a few things have changed. Let’s start with where our characters from the first season are now, shall we?

Alan (Campbell) is on a crusade to bring down the Ilaria corporation. He’s killing immortals and the suspect of a terrorist bombing in Paris.

Julia (Zargorsky), now an immortal herself, is on the Ilaria board of directors.

Sarah (Hayes) also an immortal now is still on the CDC team. She’s 15 months pregnant. Her fetus can’t develop, as it is now also immortal.

Peter (Napier) is now in his brother’s position of running the special team at the CDC.

Hatake (Sanada) is living alone on an island where he’s been hallucinating the company of Daniel (Fairbrother) and Julia’s mother.

Belleseros (Ghanime) is reduced to a small role with Ilaria mostly as Julia’s sidekick.

The show begins by tracking two timelines. Both timelines converge on the isolated island of St. Germain. Peter, Sarah, and new team member Dr. Kyle Sommers (Long) have arrived, tracking the source of a new disease that took out all but one passenger of a ship. They discover an Abbey, a cult lead by the enigmatic Brother Michael (Weber). Once again, they are cut off from civilization. No one is returning for them for two weeks. They have to work within whatever limitations the cult provides. Of course, there are new politics here as Brother Michael attempts to maintain control. But there are other agendas afoot here; the most problematic is young Amy (Louder), a daughter of Michael, who has plans of her own for control. There’s also her mother and another of Michael’s long line of daughters, Ann (Thompson), who finds in Peter a chance for her own perfect world. Meanwhile the CDC team is trying to contain and cure the latest outbreak. Coincidentally, one of the symptoms is a mindless rage, much like the vectors from season 1. Of course, they find Alan among the brotherhood working on his own agenda.

Thirty years later, Julia has also arrived at St. Germain, where she finds the mysterious Caleb (Thorburn) who asks a lot of questions and leads her to the now-broken ruins of the Abbey. We also join Julia’s mission in present day. The Ilieria board wishes to release a new pandemic to wipe out 80% of the world’s non-immortal population to sustain the planet’s resources for their own future. Julia searches for Michael, because he has developed a way to make non-immortal men sterile with an apple tree on the island they call Mother. If she can deliver his sterilization technique as an alternative, she can stop the plague.

If it all sounds too complicated, it is. Every cast member appears to have an agenda, and they all take turns carrying out some diabolical plan or another. They all have some delusions of grandeur and domination. It’s a serious flaw in the narrative. It’s the same thing that kills comic-hero films. You add too many bad guys and the story gets too hard to follow or appreciate with any nuance. Plot devices are far too contrived, and the overall pace of the season plods, often going nowhere slowly. All the while we shift from throwaway plot to throwaway plot, all leading to a rather anticlimactic coda.

The series always had its camp moments, but this year they are out of control. Helix didn’t just jump the shark. It jumped an entire ocean of them. Music is placed at the most odd and inappropriate times. Ask the show execs and they’ll likely say I just didn’t get it, as if it’s my job to get the material and not theirs to make it accessible. One episode has Hatake imagining a fishing trip with Daniel while the theme from The Andy Griffith Show plays. Daniel even stoops to toss a stone. Later in the same episode we get a comical version of Flight of the Bumblebees. It’s all a bit too much and a waste of my time.

The only saving grace here is some of the performances, and they mostly come from the newcomers. Stephen Weber is an underrated talent who delivers the most entertaining moments of the show. Alison Louder is also pretty interesting as Amy. Unfortunately, she’s given too much mustache-twirling to really let us see what she has. It’s a farce that couldn’t find an audience. Me, I wanted so much to take a nap the entire time. I didn’t, though. “How can I tell you what to do if I’m taking a nap?”

Gino Sassani is a member of the Southeastern Film Critic's Association (SEFCA). He is a film and television critic based in Tampa, Florida. He's also the Senior Editor here at Upcomingdiscs. Gino started reviewing films in the early 1990's as a segment of his local television show Focus. He's an award-winning recording artist for Omega Records. Gino is currently working on his 8th album Merchants & Mercenaries. Gino took over Upcomingdiscs Dec 1, 2008. He works out of a home theater he calls The Reel World. Favorite films: The Godfather, The Godfather Part II, The Body Snatcher (Val Lewton film with Karloff and Lugosi, not the pod people film), Unforgiven, Gladiator, The Lion King, Jaws, Son Of Frankenstein, The Good, The Bad And The Ugly, and Monsters, Inc.
Joan Rivers Box Set 10 Cent Pistol