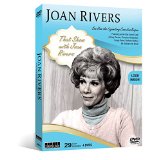 Joan Rivers left behind an enormous legacy after leaving us in September of 2014. Known for her sharp wit and celebrity stings, the comedienne proved she was a force to be reckoned with. Most known for her television vehicle Fashion Police (started in 2002 and still running), she has had a major influence in the world of comedy, and her death really shook that world. Perhaps my favorite project she has worked on was the brilliantly-titled In Bed With Joan. While televised, it was also released as a podcast. The show featured a half-hour, no-holds-barred talk with a comedian selected by Joan, which takes place in her bed. She was indeed a brilliant woman, and I hope to see more brilliant women follow in her footsteps.

With that said, this box set is an interesting look into her early career. Yet another brilliant title That Show (which is always followed by “starring Joan Rivers”) demonstrates that her wit and sense of humor are rather timeless. The general format of the show is as follows: Joan performs 3-5 minutes of stand-up comedy (more often than not consisting of crowd work), then invites two guests to sit down and discuss a particular theme: an expert and a celebrity. The expert is chosen based on that week’s theme, and, from what I understand, the celebrity is just who is available that night. For example, an episode about married couples fighting showcases Dr. Geo Bach (who wrote the book on fighting in marriage) and James Earl Jones, who give their own perspectives on the issue. The show’s runtime is approximately 30 minutes long.

I must say that each episode has an entertaining charm to it. Some of the jokes are dated, and some of the jokes aren’t even that funny, but you can’t help but be engaged by Joan. Even the more mundane themes such as boat safety, wallpaper, or manners always keep your attention for the full episode. With that said, I will highlight some of my favorite episode themes (as well as the celebrity guests) here: dreams (Rita Moreno), nudism (Johnny Carson), travel tips (Eddie Bracken), life in Russia (Roberta Peters), and fashion (Tessie O’Shea). There are many more included in this set, but my favorites should allow you to start on one of the more fun episodes.

Further researching this show brought me to segments uploaded to YouTube. While there aren’t that many, there is a 10-minute clip of a show where Jerry Lewis guests. While there 29 episodes from season one in this set, I would have really liked to see the full episode featuring Jerry Lewis. From what I saw in the segment that was uploaded to YouTube, this would have been my favorite episode from the season, given their (Jerry and Joan) chemistry as comedians. However, the fact that there is more than one episode featuring Johnny Carson (Joan’s mentor, so to speak) makes for a decent substitution in terms of comedic chemistry.

A rather disappointing feature of this collection is the lack of special features. The box set boasts that this show was “one of the first syndicated daytime talk shows on TV…” If that’s the case, shouldn’t there be a little more media coverage of that? Perhaps having some of the original people involved (if available) explain a little bit of the process? I believe the show was aired long enough to have some sort of interesting history, or even an interview with Joan about the show. The people who would actually buy this set are the people who are tremendous fans of Joan, and I believe it’s a disservice to the audience to package an incomplete season (“best of Season 1”) without any extra information about her early career. While it is fun to watch her in her element, this box set is unfortunately one last attempt to capitalize on her recent passing, or “memory.”

The packaging to this box set is rather pitiful. The discs are held in place by flimsy cardboard pockets that don’t offer much protection… except from dust. Also, if the box is tilted backward, the discs will immediately slip and fall out of their pockets. While the box set folds out to reveal still images from the show and an interesting (yet basic) timeline of Joan’s career, collectors would be wise to store their discs in safer containers.