Posted in: The Reel World by Jeremy Butler on August 7th, 2015 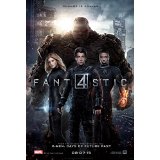 I have been hearing buzz about this film for pretty much a year. My first response after hearing about it was confusion. Now, I’m sure that I’m going to lose points for saying this, but I didn’t find the original Fantastic Four film to be that bad.  I’m not proclaiming it as the best, but for the time period, I found it to be an acceptable film. Now, I’m sure I lost of a lot of readers after that declaration, but if you if have remained with me, let’s talk about the latest installment in the Marvel universe, shall we?

The film starts with Reed Richards (Miles Teller), a clear child prodigy who aspires to create a teleportation device. It is through this motivation that he meets Ben Grimm, after rummaging through Ben’s family salvage yard for parts in order to test his prototype. Agreeing to help, the two perform the first beta test of Reed’s device, which proves successful despite that it causes city-wide blackout. Fast forward several years. Reed’s device has improved to the point that he can actually bring the object he teleports back, catching the attention of scientist Franklin Storm as well as his adopted daughter Sue (Kate Mara). They inform Reed that he has not just built a simple teleportation device, but a device with the ability of interdimensional travel. They offer Reed a scholarship to the Baxter Institute, an institution for young geniuses on the forefront of scientific discovery.

To bring the device to fruition, Reed is partnered with Sue as well as her brother Johnny (Michael B. Jordan), and Dr. Storm brings in Victor Von Doom (Tobey Kebbell), a former student at the Institute.  The device is built, and after traveling to the other dimension, the group is affected on a molecular level, bestowing them with extraordinary abilities.

Now, with this film Josh Trank has decided to go off-script from the already established story set up years ago, risky to say the least. The first thing you will probably notice will be the cast changes, namely the casting of Michael B. Jordan as the beloved Human Torch. When news of this broke, there was an obvious outcry; for reasons I do not need to elaborate on this was quite the change. However, given his past performances, this was a big selling point for me. Since shooting on the silver screen with Chronicle (also a Trank film), Jordan has established himself with hit movie after hit movie, so in the long run this in my opinion was a wise casting choice. Enough about credentials; when it comes to this film Jordan provides a moderate performance. The overall story is not about his character, and he is more of an active supporting character, but there is not a whole lot for him to work with. He is portrayed as a bit of a hothead with a rebellious streak, and his relationship with his father and sister is obviously strained, but we don’t fully understand why. That would be the first thing I would have liked to see elaborated on, the cause of the family strain, but I will touch on that more later. Jordan provides some comic relief, but not as much as his predecessor did, and that damages the character. Johnny Storm is supposed to be the least mature one of the group, but in this film he is way too serious. The character needed to be more lively and upbeat.

Another change was the decision to make the group significantly younger. Again, another risky move; however, this blow is softened by the decision to cast actors with pretty good credentials such as Miles Teller, Kate Mara, Tobey Kebbell, and last and certainly not least Jamie Bell. (We’ve already talked about Jordan). Now, these aforementioned names are pretty well known from their previous work, and I would go as far as to call them some of the best of their generation; that said, even their talents aren’t enough to carry the film. Performance-wise, I think that were all properly cast; the issue is with the story. There was plenty of buildup and too little delivery at the end. That is likely going to be the big takeaway from the film: I was so ready for this knockdown, drag-out fight, and that isn’t what I got. The film ended with a whimper instead of a bang. Again, I don’t put that on the cast; I put that on the story. For all its buildup, we still know very little about the characters’ backstory, and the decision to move away from the established story prevents using those origins. For an origin story, little is known about the people we are expected to identify with.

I get it, you don’t want to give too much backstory because it may make the story too long, but in this case this film needed to be a little longer. Truth be told, I felt like I was watching one long teaser trailer; I’m waiting on the sequel just so I can have a better understanding of the universe. It all the right things to make it a great Marvel film, but it just didn’t finish the job. So I will just call it a start, but there are a lot of things I would have loved to see gone into further detail such as in the beginning we get the impression that Victor Von Doom is already an outcast, a few more details about the actions that earned him that reputation would have been beneficial. Also more of an explanation into this his ability was definitely necessary. More character dynamics and interactions would have helped too; the relationship between Sue and Reed was barely even touched on, and that is a crucial component. Well, the only thing that I can draw from this experience is the sequel has a lot to catching up to do (because let’s face it, we all know there’s going to be a sequel).

Jeremy Butler is a film school graduate of the International Academy of Design and Technology. He is been writing for Upcomingdiscs since 2012; however, movies have played a big part of his life for much longer. Favorite genres include horror, science fiction/fantasy, and comedy. Favorite movies are V for Vendetta, Boondocks Saints, Kiss Kiss Bang Bang, and The Godfather.
Child 44 (Blu-ray) Ricki and the Flash