Posted in: Disc Reviews by Gino Sassani on August 7th, 2015 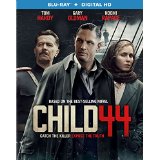 “There can be no murder in paradise.”

That was the stand of the Soviet Union’s ruling party during the Cold War. They believed that murder was a capitalist crime. So what happens when a serial killer is killing young boys up and down the railway? That’s the premise of Lionsgate’s Child 44. It’s based on the Tom Rob Smith novel which is part of a trilogy based on the character Leo Demidov. The story itself was based on an actual Soviet Union serial killer named Andrei Chikatilo, who is suspected of killing over 50 children in the 1970’s. To set the story apart from other “true crime” entries, the facts were fictionalized and moved deeper into the Cold War era of the 1950’s and a post-war Soviet Union at the peak of its power and world influence. It was their own “great experiment”, and it was considered fatal to admit to the world that such base crimes and instincts existed in such a utopia.

“In 1933, at the height of Joseph Stalin’s self-imposed famine against the Ukrainian people, an estimated 25,000 died each day from starvation. The systematic extermination by hunger, known as The Hobodomor, left millions of children orphaned.”

One of those orphaned was Leo Demidov (Hardy). He was adopted by a military commander and served with distinction when WWII began. He was photographed in a Soviet version of Iwo Jima and became a war hero. That allowed him a prominent place as an officer in the Soviet Secret Police in search of “traitors”. It was the Soviet version of our own McCarthy era. In his unit were his best friend Alexei (Fares) and Vasili (Kinnaman), a coward in the war who was now envious of Leo’s position and his wife Raisa (Rapace). That’s another trait the Soviets denied existed in their “perfect” society. They chase down named traitors until one such detainee names his wife. Leo refuses to disavow her and pays a terrible price for it.

“He’s a traitor, and traitors have friends, and these friends are not our friends.”

It’s a bit of ironic justice that Leo is brought down by the same kind of logic that he used to bring down others. It doesn’t help him that when Alexei’s child is found dead by the railway tracks it is ruled an accident. But a witness saw things differently. The facts don’t jive with the report. Leo has to convince Alexei to drop the matter or face the kinds of consequences he himself faces when he refuses to disavow his wife. He is demoted, and they are sent to the distant and poor province of Volsk, where his future is placed in the hands of General Mikhail Nesterov (Oldman). Raisa goes from schoolteacher to school janitor. Both are attempting to accept their fate when another child is found dead in the same mysterious circumstances as the Alexei child.

Leo manages to convince the General that there is a serial killer loose, but he and Raisa end up fighting the cause alone. They are pursued by Vasili, who now has Leo’s old job and wants his wife as well. Here’s where the film bogs down literally in the mud of both story and physicality. For a smart guy, Leo manages to operate from a severe place of naïveté, going from clue to clue and finding himself a fugitive along the way. Now the film turns from being the smart period thriller it starts out as and descends to simple cat- and-mouse nonsense that pulls all of the great production and clever plot into the same mud where Leo and Vasili have their inevitable showdown.

It’s quite a shame, because this could have been a great film. The ideology surrounding a serial killer of young boys is a clever and utterly fascinating one. The film also sports an atmosphere that truly supports the brooding hopelessness of these characters and the paranoid times in which they lived. Add to that a wonderfully talented cast who deliver rather solid work within this place. It’s quite compelling… for a time.

The Richard Price screenplay wants so much to be something epic. Everything gets drawn out to the absolute breaking point. From chases to superbly-thought-out drama sequences, the effect is almost always ruined by the inability to know how to end it. I’m not sure who is to blame here. There’s plenty of it to go around. The editing could have fixed this misguided desire to linger. Director Daniel Espinosa doesn’t appear to have a feel for scene resolution. It’s all left up to the performances and great job of production. But that’s not enough. This is why good directors and good screenwriters and good editors get paid good money. They say a film is written three times: when it’s written, when it’s shot, and when it’s edited. Three chances to birth the greatness that exists here, and the batters go down swinging. Three strikes and you’re out. In the end a potentially great film falls into mediocrity.

Child 44 is presented in its original aspect ratio of 2.40:1. The 1080p image is arrived at with an AVC MPEG-4 codec at an average 35 mbps. There’s a lot of brooding atmosphere in this high-definition image presentation. Even if the writer, director and editor failed in their jobs, it’s not for want of a solid production staff. The cinematography here is excellent. The texture of this muddy, desolate life exudes from every frame. Detail and texture are perfectly balanced at every turn. There isn’t much color here, nor should there be. The Czech Republic locations contribute authenticity to the piece. Black levels are nice with solid shadow definition. The film looks quite stunning at times.

The DTS-HD Master Audio 5.1 is best felt in the opening war scenes. That’s where surrounds deliver the immersive action of bullets whizzing about. Explosions remind you why you spent good money on a powered sub. The remainder of the film is pretty much dialog-driven, and the audio presentation serves that purpose well. Everything is well-balanced and clear. Surrounds offer just the right amount of ambient to keep you inside this thickly atmospheric piece.

Reflections On History – Recreating The World Of Child 44: (8:18) A lengthy name for a short feature that spends most of its time on costume design.

The film is somewhat timely. The news is filled with developments as Russia is, once again, a threat to the people of the Ukraine. While that isn’t the focus of the film, the cyclic nature of history can’t be ignored here. There are a lot of well-thought-out elements here. The problem becomes that there are too many. The film tries too hard to cover ground that doesn’t really serve the story that should have been here. For some reason, the crew wants us distracted and moved about from place to place often for no real reason at all. I would like to see this story handled by more capable hands, and I don’t mean the cast. Shame on you, Daniel (Director), Richard (Screenwriter) & Pietra & Dylan (Editors). These guys, “That’s how I see it.”

Gino Sassani is a member of the Southeastern Film Critic's Association (SEFCA). He is a film and television critic based in Tampa, Florida. He's also the Senior Editor here at Upcomingdiscs. Gino started reviewing films in the early 1990's as a segment of his local television show Focus. He's an award-winning recording artist for Omega Records. Gino is currently working on his 8th album Merchants & Mercenaries. Gino took over Upcomingdiscs Dec 1, 2008. He works out of a home theater he calls The Reel World. Favorite films: The Godfather, The Godfather Part II, The Body Snatcher (Val Lewton film with Karloff and Lugosi, not the pod people film), Unforgiven, Gladiator, The Lion King, Jaws, Son Of Frankenstein, The Good, The Bad And The Ugly, and Monsters, Inc.
Phantom Halo Fantastic Four