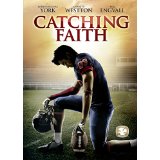 Our buddies over at RLJ Entertainment have a moving story coming to DVD. It’s called Catching Faith and it’s sure to touch a few lives. A young football player finds himself making mistakes in his life that the community is willing to ignore in the cause of victories. The young man must learn a lesson about taking responsibility. Check out any sports column today and you’ll agree it’s a lesson some pros might need to learn. 2 of our lucky readers will score a victory of their own when they win a copy of Catching Faith.

Gino Sassani is a member of the Southeastern Film Critic's Association (SEFCA). He is a film and television critic based in Tampa, Florida. He's also the Senior Editor here at Upcomingdiscs. Gino started reviewing films in the early 1990's as a segment of his local television show Focus. He's an award-winning recording artist for Omega Records. Gino is currently working on his 8th album Merchants & Mercenaries. Gino took over Upcomingdiscs Dec 1, 2008. He works out of a home theater he calls The Reel World. Favorite films: The Godfather, The Godfather Part II, The Body Snatcher (Val Lewton film with Karloff and Lugosi, not the pod people film), Unforgiven, Gladiator, The Lion King, Jaws, Son Of Frankenstein, The Good, The Bad And The Ugly, and Monsters, Inc.
When Calls The Heart: Heart Of The Family I Am Big Bird: The Caroll Spinney Story