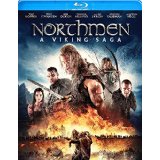 There are an awful lot of people online who do not approve of Northmen: A Viking Saga, and they base their opinion in one of two things: either it’s a “ripoff” of the popular television series Vikings, or they criticize the film’s historical inaccuracies. I can’t defend the film’s creation being linked to the television show, nor will I pretend to know much about Viking history. However, I can provide an interesting question that will, with out a doubt, provoke some thought about the matter: so what? Through this review, I hope to nullify some of the current dismissive reviews and provide the fair review the film deserves.

Northmen: A Viking Saga follows a small, independent group of Vikings, led by Hjorr (Ed Skrein), who have fallen out of favor with their major tribes. During their journey, they happen upon a caravan transporting Inghean (Charlie Murphy), the daughter of a king. The soldiers escorting the caravan, knowing the reputation of Vikings, immediately attack the troupe and lose (despite their overwhelming numbers). After achieving a small victory in the initial battle, the Vikings decide to kidnap Inghean in hopes of bargaining for a hefty ransom. As they venture onward, Inghean begins to appreciate the Vikings’ nobility and camaraderie.

While I will admit that the story is a typical adventure plotline, it is very entertaining and engaging. I have not seen the Vikings television series, but I can guarantee that this film will take much less time to deliver a satisfactory story. The film may very well be a capitalization on the recent television series, but it is not a cheap one: a lot of time and effort was put into this film. For example, if you are familiar with my reviews, you will know I am a sucker for innovative cinematography. While there wasn’t much in Northmen, there were just a few things that really stood out to me (particularly the cliff scaling scene towards the beginning).

As far as how “historically inaccurate” the film is, I’m quite bothered by this critique, primarily because I believe that it’s an unspoken understanding that films don’t have to be historically accurate at all; they just have to be entertaining. Northmen most certainly delivers entertainment. Secondly (and this is the Film Studies student coming out), I will argue that Northmen is most certainly historically accurate. Maybe not through its portrayal of Vikings, but the film is a reflection of the contemporary culture that surrounds it. This is true of all films.

Now while I find the film a lot of fun, it’s not without faults. The action sequences are a bit too spread out, and as intriguing as the story is, the pacing does tend to slow down in areas. A film slowing down is a common critique, and it doesn’t necessarily change my opinion of the film, but it is my job to tell you that it happens. However, it is most certainly worth waiting a little while for the action sequences. A lot of swordplay combined with really intense moments between protagonists and antagonists consistently gives the audience something to enjoy. These sequences also become rather unrealistic and ridiculous. This is something I love about the film. You will have to judge for yourself, but if you prefer realistic fight choreographies, this film may not be for you.

Finally, I want to talk about the cameo of Johan Hegg, frontman of the Swedish metal band Amon Amarth. He portrays the character Valli, the more hardened warrior of the troupe. The band is known to incorporate Viking themes into their music, so Hegg not only looks the part, but he uses his vocal ability to release a realistic battle cry. Given it is his first step into the world of acting, I think he did a good job. In fact, I was a little disappointed he died off rather quickly because of how well he portrayed a fierce warrior. I don’t want to spoil too much, but this film does a great job of making you care which characters die, and it all starts with Valli. Overall, this film is a fun, simple, and re-watchable adventure flick.