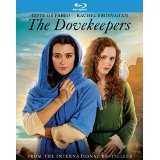 “You will remain my prisoners until you’ve told me what really happened in Masada.”

Those words are spoken by Flavius Josephus, the real-life historian for the Romans who chronicled the Siege of Masada. In The Dovekeepers, Josephus is talking to two iron-willed female prisoners who also happen to be among the few people who survived the attack. Their story is told in flashback, and this two-part miniseries brushes up against some interesting points about who gets to write humanity’s history. But in telling the story from a female perspective — an admirable, out-of-the-box idea — this miniseries reduces a complex, fascinating historical event into a stiff, protracted soap opera.

Set in 70 A.D., the two-part CBS miniseries opens with Josephus (Sam Neill, hamming it up amusingly) demanding the truth from his two striking prisoners. Shirah (Cote de Pablo) goes first and details her move to Jerusalem to serve as a nursemaid for a cruel distant relative’s (Manuel Cauchi) two young children: Amram and Yael. As the Romans gradually descend on Jerusalem, Shirah falls in love with a married warrior named Eleazar (Mido Himada), who is also the leader of a group of Jewish rebels known as the Sicarii. After Shirah becomes pregnant with Eleazar’s son, she is disgraced and banished to the desert, where she remarries, has another child, and cultivates her image as an enchanting mystic.

“My mother warned me…love would be my undoing.”

Josephus’ other prisoner is a grown-up Yael (Rachel Brosnahan), whose life choices eventually mirror Shirah’s. Her brother Amram (Diego Boneta) grows up to become a Sicarii warrior himself who famously wounds Roman general Flavius (Sam Hazeldine). The infuriated general resolves to destroy Jerusalem, so Yael and the rest of the Jews flee to Masada, a seemingly-impregnable mountain fortress in the desert. On the way there, Yael also falls in love with a married man and becomes pregnant with his child. Although she doesn’t have Shirah’s outwardly mystical lineage, we witness the spiritual toll Yael’s forbidden romance eventually takes. Speaking of Shirah, when she gets word that her true love Eleazar is headed toward Masada, she packs up her two children — daughter Aziza (Kathryn Prescott) doesn’t know Eleazar is her father — and resolves to meet him there.

The Dovekeepers is based on the 2011 best-selling novel of the same name by Alice Hoffman, who is credited as a producer here. As many copies as Hoffman’s book may have sold, it’s still not nearly as much as the Bible, which served as the basis for two popular miniseries previously created by the husband-and-wife producing team of Mark Burnett and Roma Downey (the former star of Touched by an Angel). While The Dovekeepers flopped compared to the duo’s The Bible and A.D. The Bible Continues, it shares several qualities with those two projects.

Burnett and Downey have obviously found a way to adapt material that is overtly spiritual in a manner that is palatable to a mass audience. The Bible set ratings records while largely sidestepping the controversy that inevitably follows religious-themed projects. Of course, the downside of avoiding controversy is that a filmmaking team often refrains from taking artistic chances. While that might be a savvy move when adapting the Bible, taking a similarly bland approach to a property that’s not nearly as well-known feels lazy.

I haven’t read “The Dovekeepers”, so I can’t say for sure if that’s the case here. All I know is that neither director Yves Simoneau nor writer Ann Peacock do much to spice up a pretty standard melodrama. And comparably shoddy production values is another thing The Dovekeepers has in common with The Bible and A.D. (Nevermind Cecil B. Demille productions; the presentation here feels chintzy compared to a dozen other historical cable dramas on the air right now.) Then again, substandard sets are really the least of this miniseries’ troubles.

Each of the two parts feels overly repetitive. I get that Part One seeks to establish how both Shirah and Yael are felled by their hearts’ desires — so much for them being strong, independent women — but it would help if all of the women in the story didn’t fall in love with slight variations of the same tall, dark and handsome warrior with uncommonly-trimmed facial hair. (To be fair, Yael does switch things up a bit by connecting with a blond Roman soldier) The pacing and presentation of the siege pushes almost all of the action to the second half of Part Two, which tests the audience’s patience when you consider the miniseries clocks in at 172 minutes. The Dovekeepers also can’t seem to decide how much to build up Flavius and his Roman army as antagonists: one moment they’re getting wiped out by badly undermanned Sicarii rebels, the other they’re ingeniously devising a way to infiltrate Masada.

It’s too bad because some of the performers here were absolutely game. De Pablo (appropriately wily and exotic as Shirah) and Brosnahan (conveying Yael’s resoluteness in the face of constant heartbreak) make for a pair of compelling leads. Unfortunately for them, the presentation of Shirah and Yael’s story is so fragmented that neither ends up being as effective as they could’ve been. (It might’ve been interesting to make Shirah and Yael the stars of their own Parts.) Neill seems to be enjoying himself as Josephus drips with disdain during his interrogation. (On the other hand, Hazeldine makes for a supremely bland bad guy as the Roman general.) I was also impressed by Prescott’s pluck as Aziza, who longs to be a warrior.

Even when The Dovekeepers touches on an intriguing notion, the execution is bungled. Shirah and Yael are tasked with passing down the noble story of the Sicarii, while Josephus’ inclination is to diminish and undermine their memory. The idea that the people who win wars are the ones who get to write history is fascinating, but it becomes less so when you have characters outwardly talking about how important it is for their stories to live on. Unfortunately for The Dovekeepers, it’s probably already been forgotten by anyone who tuned in.

The Dovekeepers is presented in an aspect ratio of 1.78:1. The 1080p image is arrived at with an AVC MPEG-4 codec at an average of 18 mbps. I mentioned the relatively lo-fi production values — this ain’t exactly Game of Thrones — but the strong visual presentation here gives the proceedings a slight boost. The image is clean, warm and blemish-free. I know this is a TV miniseries, but some filmic grain would’ve been beneficial here. Instead, much of the presentation has an artificial sheen that took me out of the time period. (At least the sheen is purposeful during Yael’s dream sequences.) Fortunately, fine detail is impressive throughout while revealing texture in the costumes and set design. My favorite part was the deployment of color: as the action flashes back to the past, the image gradually becomes more saturated. There are also pleasing pops of color among faded, black and white memories.

The DTS-HD Master Audio 5.1 track does a better job of replicating the scope of a large-scale production than the visual presentation. There’s an understated-yet-effective sense of immersion during busy scenes in the streets of Jerusalem and even during the more desolate stretches in Masada. The march of the Roman army also feels appropriately impactful thanks to the robust sound spread across all speakers (including the subs). And even though the climactic confrontation could’ve felt bigger than it was from a sonic perspective, there are subtle bits of directionality as flaming arrows fly from one channel to another.

The Dovekeepers Taking Flight: (29:06) A pretty in-depth “Making of” documentary that covers all aspects of the production, starting with Downey reading (and becoming obsessed) with Hoffman’s novel on a transatlantic flight. The author pops up to offer commentary, and we learn she had story and casting input. We also see how the crew practically built a village in Malta and used special effects to incorporate footage of the real-life Masada.

You may or may not be wondering why this thing is called “The Dovekeepers.” Other than the fact that Shirah, Yael, and Aziza are shown working in a dovecote in Masada for less than a handful of scenes — the birds were used to send messages of love —I honestly have no idea.

I admire The Dovekeepers for trying to bring back the network miniseries — coincidentally, this historical event was previously adapted into a 1981 miniseries with Peter O’Toole called Masada that aired on ABC — and for approaching its story from a different angle. (I thought Lifetime’s The Red Tent was more successful in bringing a female-fronted, faith-centered story to life.)

Unfortunately, this miniseries reduces the story of ostensibly resourceful women into a tragic melodrama that doesn’t deliver on its promise.