Last Days of the Nazis 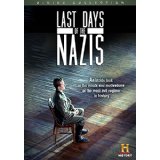 “It’s 1945 and World War II is over. Hitler is defeated. But over eight million Nazis remain. Now Allies must conduct interrogations to identify Nazi offenders, from war criminals to the girl next door. What emerges is a startling history of the rise and fall of the Third Reich from a unique perspective: the Nazis themselves. What you are about to see and hear is based on their real interrogations. This is what they told us.”

It’s always been true that history is written by the victors. Usually theirs is the only voice remaining, and in the time before such inventions as audio recordings and film, that was surely the case. World War II would be an early example of the exception. Hitler is remembered as much for the endless footage we have as much as he is for the atrocities he delivered upon the earth. The war crimes trials in Nuremburg give us a unique look into the minds of these fanatics. This is the first documentary I have encountered that is dedicated exclusively to the material that came from the investigations for those trials. Consider these as depositions to that procedure. It’s a rather unique idea with some powerful potential. Certainly there are lessons to be learned here. Unfortunately, A&E didn’t quite live up to their own standards and expectations with the six-part Last Days Of The Nazis.

The series uses a combination of techniques. There is plenty of vintage footage of Hitler and his war machine as well as the emotional images of the holocaust. There are plenty of stills. The show features actors who take on the persona of the various war criminals who were interrogated. The words are taken directly from the transcripts and recordings. This all works out well and good, but the episodes are too heavily padded with elements to heighten the drama which come across as a bit much. There are long shots of the actors staring sternly into the camera. You get close-ups of eyes watching you for too long. The material is powerful enough to need such theatrics to bring the impact home.

The narration suffers terribly. Jake Paque is monotone throughout. It’s obvious he’s reading from a script. Of course, all narrations are scripted, but they don’t all sound so obviously so. He does nothing to accent the narrative and is almost hypnotic.

The documentary also contains the usual experts filling in the gaps. This was actually the best part of the show, and I would have liked to have more of this. It’s that historic perspective that brings this material to life. And there is some new information here. When the series is being informative, it is often quite effective at it. Too much time is wasted on redundancy and those staged stares so that the series could have been compressed to maybe a little more than half its current running time. Instead footage is reused too often, and statements are recycled nearly as often. The images are disturbing and should be taken into account before you or members of your family view this series.

There were six episodes, but the DVD set reduces it to three segments each containing two episodes. That accounts for three 90-minute segments over two discs. There are no bonus features to be found here.

In the end the series doesn’t distinguish itself from the thousands of others on the subject. It never lives up to a rather interesting promise. I don’t really feel like I know these war criminals better than I did before. That would have been something to see. Instead we get something like what we see on serial killer bios over the years, and it leaves us with only the grisly images that we’ve seen before. Fortunately, these are not the kinds of images that have lost their effectiveness over the years. The holocaust was an unimaginable event in human history. One thing I can agree with this documentary on is that “We should never forget that this was a mad world.”

Gino Sassani is a member of the Southeastern Film Critic's Association (SEFCA). He is a film and television critic based in Tampa, Florida. He's also the Senior Editor here at Upcomingdiscs. Gino started reviewing films in the early 1990's as a segment of his local television show Focus. He's an award-winning recording artist for Omega Records. Gino is currently working on his 8th album Merchants & Mercenaries. Gino took over Upcomingdiscs Dec 1, 2008. He works out of a home theater he calls The Reel World. Favorite films: The Godfather, The Godfather Part II, The Body Snatcher (Val Lewton film with Karloff and Lugosi, not the pod people film), Unforgiven, Gladiator, The Lion King, Jaws, Son Of Frankenstein, The Good, The Bad And The Ugly, and Monsters, Inc.
Tuesday Round Up: August 18, 2015 Shark Week: Dominating the Deep