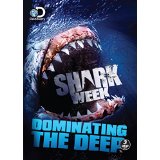 Discovery Channel’s annual Shark Week extravaganza is billed as “cable’s longest-running programming event.” The summertime ritual premiered in 1988, and its longevity is a testament to viewers’ enduring fascination with the majestic, sharp-toothed creatures. Of course, the flip side of that longevity is that coming up with new material each year is increasingly difficult. As a result, this new Dominating the Deep DVD set features some legitimately thrilling moments alongside a few too many episodes that rely on flimsy science, and myth-making sensationalism to entertain audiences.

Then again, what the heck do I know? Dominating the Deep includes Shark Week episodes from 2013, which kicked off with what was probably the most controversial piece of programming in the series’ history. Not surprisingly, “Megalodon: The Monster Shark Lives” was also the most popular. The two-hour “documentary” supposedly tells the story of a fishing vessel that was attacked by an unknown predator off the coast of South Africa. We follow a marine biologist named Collin Drake as he and his team try to identify the culprit. Eventually, Drake settles on the notion that the perpetrator was the prehistoric megalodon shark.

On the one hand, anyone who’s seen The Blair Witch Project or a Paranormal Activity movie knows not to take far-fetched, found-footage folklore at face value. Then again, people who tune into a science-themed program on the Discovery Channel have a much greater expectation for verisimilitude than anybody who plunks down to watch a horror movie. Despite some *very* brief disclaimers at the beginning and start of the program — and despite some relatively amateurish, unconvincing acting — plenty of people were fooled. Personally, I wasn’t annoyed because I thought “Megalodon” was real; I was annoyed because I feel sharks are fascinating enough in their own right, and Discovery would do well to leave the shark-nanigans to SyFy.

That being said, each of these Shark Week programs features top-notch production values. In fact, the overly-sleek presentation for each of the episodes blurs the line between fact and fiction and probably helped lead to the “Megalodon” confusion. The “Sharkpocalypse” episode — which explored the idea that intrusive humans are contributing to the increase in shark attacks by eliminating potential food sources — was the most successful mix of science and nonsense. (That title!) We watch cheeky hosts Andy Casagrande and Devon Messyn as they attempt to attach “fin cams” to sharks in South Africa and the Bahamas. “Great White Gauntlet” wasn’t as goofy, but the lucrative process of collecting abalone was an eye-opener for me, despite only being tangentially related to sharks. (Divers have to beware of sharks while diving for the sea snails off Australia’s southern coast.)

At the risk of sounding nerdy, I found the most effective episodes to be the ones that focused heavily on the science of sharks. That would include “Return of Jaws” and “Spawn of Jaws”, which sound like horrible sequels to Steven Spielberg’s masterpiece but are actually riveting attempts to tag and study sharks. “Return” investigates the reasons behind the first shark attack in Massachusetts in almost 80 years, while “Spawn” seeks to find out where great whites give birth. “Spawn” also features a now-melancholy appearance by late actor Paul Walker, who studied marine biology.

My other favorites were “Alien Monster Sharks” (we get fantastic glimpses at rare, gnarly looking deep-sea species), “Top Ten Sharkdown” (a countdown of the 10 deadliest sharks; mini-spoiler alert: the great white shark is not #1), and “I Escaped Jaws.” Sure, that last installment is basically a glorified episode of When Animals Attack! But there is absolutely no substitute for the real life accounts and actual footage of survivors talking about their close encounters with sharks. The deformities and attacks we see — one guy almost has his lips bitten off — are 100 times more chilling than anything in the phony “Megalodon.”

Shark Week: Dominating the Deep features 10 episodes that originally aired in 2013 on three discs. There are no special features. I’m all for presenting viewers with a diverse slate of entertainment options, but I also feel that essentially making 30 percent of that slate fluff is a waste of time and resources. Fortunately, the good absolutely outweighs the bad here, and a newer network mandate seems to have Shark Week moving in the right direction again. It’s a good thing because if things kept trending toward “docufiction”, it wouldn’t be long before Shark Week jumped the…well, you know.