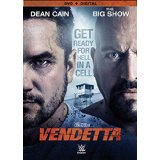 “You have the skills of a cop, and the constitution of a cold-blooded killer. What better combination can there be.”

There are clearly no heroes in this revenge tale, making it kind of hard to decide who to root for. If anything, it is bad versus slightly less bad. Dean Cain stars as Mason Danvers, a once-honest cop who gets himself locked up on to seek revenge against the criminal who murdered his wife. Revenge, now there is a subject that never gets old; however, in the case of Vendetta it is likely it will get old very fast. I had high hopes, as the premise had my interest, but the overall presentation was a lot less cerebral than I had hoped, coming off more cause-and-effect rather than cat-and-mouse.

My first issue with the film is there is no real explanation for the relationship between Danvers and Abbott. It is established that the two are rivals and are on opposing sides of the law; however, it still does not explain why Danvers is fixated on Abbott at the beginning of the movie. His fixation after the death of his wife makes sense; however, the dynamic of the two at the beginning of the film indicates that Danvers has been after Abbott for a long time in what appears to be a deeply personal crusade. The only conclusion that can be drawn is that Danvers has a strong sense of justice and right and wrong; however, that does not jive with his actions in the latter half of the film. In my opinion it would have been more beneficial to have provided a more in-depth explanation for why Danvers wants to take down Abbott. This is two-sided as well. Abbott’s decision to murder Danvers’ wife simply because he arrested him is way too thin, especially given that his character doesn’t appear that egocentric; at least in the beginning of the film he does not appear that way.

Going back to my earlier mention of there being no heroes in the film, that it makes it very difficult to determine who the root for. Granted Danvers has cause for his actions, but the extremes he goes to without considering consequences or how it tarnishes the memory of his dead wife that makes it near impossible to have any sympathy for him. Speaking of his dead wife, for a man who is motivated by wanting to avenge her, there is not a whole lot of mention of her after she is gone. Perhaps a few flashback sequences showing their bond would have gone a long way towards garnering sympathy for Danvers.

Story-wise for me things just didn’t make a whole of sense. Especially in the beginning, Danvers finds Abbott standing over his dead wife, and instead of killing him in that moment, he lets him be arrested and then decides to get himself arrested with the sole purpose of seeking his revenge, i.e. killing him. Does that seem redundant for anyone else? There should have been more strategy, a well thought out plan to destroy Abbott’s world before seeking the ultimate revenge. In reality, Danvers appears to be just stumbling through the whole movie, basically only taking action in reaction to when Abbott makes a move on him. Does that make sense to anyone? Let’s look at matters more closely. It is established that despite his incarceration, Abbott’s enterprise is thriving within the prison walls and outside. The focus should have been on dismantling that enterprise, turning allies against him and bringing his world down around him. The way things unfolded can only be described in one word in my opinion: bumbling.

Now on to the performances. I have been a Dean Cain fan dating as far back to his man of steel days, and I have always hoped that he would find his claim to fame again, but I am certain that this will not be it. His performance is adequate, but there is nothing truly special about it, nothing to make his character stand out. Like I said earlier, bumbling. This will not be the Big Show’s claim to fame either, as he is less threatening and methodical than we are originally led to be believe. He goes from kingpin to lapdog very quickly in the film, and not in a believable way. His character needed to carry himself in the same fashion as the faux tattoo on his chest described: NTBFW (not to be f&8$ with). And finally Mr. Ekland, whose character if you ask me served no real purpose and only took away from the interaction of the two lead characters. He is not threatening or menacing and is basically akin to when the kid who got beat up in high school finally gets a chance of revenge against his tormentors.

In conclusion, much more planning needed to be put into this film before it was made. With a few good tweaks in the right areas, it would have made a compelling story. Revenge is a topic no one ever gets tired of watching; however, it is likely in the case of the this revenge tale, you will get tired rather quickly.

Jeremy Butler is a film school graduate of the International Academy of Design and Technology. He is been writing for Upcomingdiscs since 2012; however, movies have played a big part of his life for much longer. Favorite genres include horror, science fiction/fantasy, and comedy. Favorite movies are V for Vendetta, Boondocks Saints, Kiss Kiss Bang Bang, and The Godfather.
It Happened Here Maude: Season 2