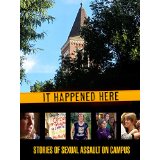 These words are spoken by Diane Rosenfeld, and are probably some of the most poignant words spoken in this documentary. Lisa Jackson’s film It Happened Here tells the story of young women who have been raped during their stay at college. Each one of the girls recount their traumatic experiences and each one do everything in their power to make this horrifying reality known to the public. Having been active in some of America’s universities over the past seven years (both as student and faculty), the message being conveyed in this film is one that hits close to home.

Strictly from the perspective of a film consumer, the documentary is simple and compelling. Quite possibly the greatest strength of the film is its length. At just about an hour and fifteen minutes, Jackson adequately presents the issue and raises the correct questions in order to reach both audiences who are and are not educated about this topic. While I typically appreciate documentary filmmakers breaking the mold with their art, I have to respect Jackson for her simplicity. Because the issue of women being raped on college campuses has remained untouched for decades, it is only appropriate to take the viewer by the hand and slowly walk them through the terror.

The only critique I can honestly offer is that the film has a little too much of an optimistic tone. The women featured do an excellent job of relaying their stories on camera, but they do so behind a smile. The need to laugh off the issue is more than likely a defense against the trauma that these women experienced, but the visual appearance of the laughter could quite possibly undermine the film’s message to an uneducated viewer. This is an unfortunate obstacle of documentary filmmaking: the wrestling match between foundational information and visual information. It may not be obvious while watching a documentary, but the images that stimulate a response from viewers can deliver unintended results (i.e. “the girl’s parents don’t look like they are affected, so why should I be?”)

I believe this documentary is a step towards a solution to this nationwide issue. I know for a fact my alma mater, University of Central Florida, recently conducted a Title IX investigation within one of its fraternities. The point being: although there are only four “issue” colleges in the documentary, it does not stop there. Every college has this issue. The phrase “rape culture” is thrown around loosely towards the end of the film. While it definitely carries a rather impressive amount of persuasiveness, I believe that it should be revised for future films and future activists.

Given how deep the roots of this rape issue have actually grown (universities denying allegations to protect the institution), I would drop the word “rape” from the phrase “rape culture”. This documentary is our culture. This documentary is the reality that we are living in, whether we are aware of it or not. It is not a reality we should separate ourselves from by labeling it as something different from what we perceive to be the norm. I’m sure Lisa Jackson and all the women who have been violated will agree with me. There is no such thing as a “rape culture”. There is only the culture in which we reside. The sooner we are able to acknowledge this grim reality, the sooner the issue will be resolved.

The DVD extras provide information on what you can personally do to help, and the film’s website, ithappenedhere.org, has a lot of similar information.

When the Checks Stop Coming In Vendetta