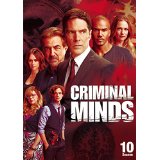 What can I say about Criminal Minds that hasn’t been said in the last 10 years? It’s the little show that could. I’ve been a fan since the first episode when Mandy Patinkin was the show’s leader. His departure left the show with a hole it was swift to fill, and I have to say it hasn’t missed a beat since. The rest of the cast has been solid for most of that decade, and they’ve evolved into one of the best teams on television. Because of this show we all learned what an unsub was and have become pretty aware of the things that go on in a killer’s mind. It was the perfect sister show to CSI for years on Thursday nights. CSI dealt with the physical evidence, while Criminal Minds dealt with the mind. What a combination.

Enter Agent Rossi (Mantegna), who is actually one of the unit’s founding fathers. Agent Hotchner (Gibson) is the often stoic agent in charge who defers to Rossi’s judgment most of the time. The team also includes young Dr. Reid (Gubler), who is a genius but lacks the necessary skills to have much of a social life. Agent Morgan (Moore) is the dynamic soul of the team, possessing an unending supply of energy to drive their investigations. JJ (Cook) is the public face of the team, handling liaison duties with local law enforcement and also the team’s press relations. In a command center that rivals the bridge of the Enterprise is Agent Garcia (Vangsness) who handles the computer research while the rest of the team is in the field. This year sees the addition of Ghost Whisperer herself, Jennifer Love Hewitt  as Kate Callahan. She has a teenage daughter who ends up being a witness in one of this season’s cases. Together they travel to hot spots throughout the country to help local cops and feds with hard to capture UnSubs (what the team calls the criminal, meaning Unknown Subject).

The big story this year has to be the episode Nelson’s Sparrow. Patinkin’s exit was not a friendly departure, but fans might have held out hope he might show up somewhere along the line, perhaps when the show finally reached its series finale. It was always unlikely. Now it’s even less likely. In this episode the BAU investigates the death of Gideon. It’s a bittersweet moment for fans that is also a rewarding experience. The episode takes us through younger actors to the days when Rossi and Gideon founded the BAU. It’s a story that has been long overdue in the telling. The writers, cast and crew all did an absolutely stunning job, making this easily one of the best episodes ever for the series. It may very well be goodbye to Gideon, but it marks a milestone for the show’s characters, particularly Reed who considered him a mentor. It gives that character some of the best emotional stuff for the rest of the season.

The show also continues to provide sympathetic killers. In this case a woman suffered brain damage in a specific part of the brain that can turn you into a killer. Hey, that’s scary all by itself. It gives us a killer we feel bad for, but one who must be stopped. What do you do with 2000 cockroaches and assorted spiders? You dump them on a victim and create a creepy crawly episode that might have you feeling more than a little itchy. JJ has one of the better episodes as she lives the anniversary of her tragic 200th episode events. It’s one of the show’s trends this season to pay off earlier episodes and stories. Derek gets a steady girl, and Hodge gets to deal with a crumudgedy Ed Asner. A plane crash allows for one of the most expensive locations and sets for the series.

There are plenty of extras to be found here. You’ll get deleted scenes, a gag reel, and a music mockumentary. There are a few brief behind-the-scenes features and the traditional half-hour season summary. You get all 23 episodes on six discs.

To the point, Criminal Minds is very compelling television. Ever since The Silence of the Lambs and perhaps long before, we have been fascinated by serial killers and the profilers who try to get inside their heads. To see evidence of the continuing trend, one needs only look toward the success of shows like Dexter. Of course, serial killers are not the only prey this FBI team pursues, but they are certainly the marquee item on the agenda. To be sure, there are equally disturbing subjects such as arsonists, bombers, kidnappers, and rapists to give the show a touch of variety, but let’s face it, it’s the killers that keep us tuned so attentively to Criminal Minds. I suspect that Patinkin might have some regrets about not being a part of what this show has become. “Life is about choices. Some we regret, some we’re proud of. We are what we chose to be.”

Gino Sassani is a member of the Southeastern Film Critic's Association (SEFCA). He is a film and television critic based in Tampa, Florida. He's also the Senior Editor here at Upcomingdiscs. Gino started reviewing films in the early 1990's as a segment of his local television show Focus. He's an award-winning recording artist for Omega Records. Gino is currently working on his 8th album Merchants & Mercenaries. Gino took over Upcomingdiscs Dec 1, 2008. He works out of a home theater he calls The Reel World. Favorite films: The Godfather, The Godfather Part II, The Body Snatcher (Val Lewton film with Karloff and Lugosi, not the pod people film), Unforgiven, Gladiator, The Lion King, Jaws, Son Of Frankenstein, The Good, The Bad And The Ugly, and Monsters, Inc.
Falling Star Where Hope Grows (Blu-ray)