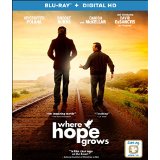 “I guess I could use some of that magical happiness you always seem to have.”

David DeSanctis, the novice performer with Down syndrome making his feature film debut here, is easily the best thing about Where Hope Grows. Both the actor and the character he plays radiate genuine warmth and irrepressible positivity. Those qualities help boost this well-meaning redemption drama, which suffers from one too many storylines and an unintentionally appalling ending.

Where Hope Grows is ostensibly the story of former baseball player Calvin Campbell (Kristoffer Polaha). Having flamed out of the big leagues in some sort of vaguely humiliating fashion, Calvin is now unemployed and has a drinking problem, much to the chagrin of his teenage daughter Katie (McKaley Miller). However, the film actually opens by showing us the daily routine of a resourceful young man known as Produce (DeSanctis) as he prepares to head into the neighborhood market where he works.

Calvin runs into Produce at the grocery store and is impressed with his relentless good cheer. (And by Produce’s ability to remember the price code for seemingly every fruit and vegetable.) The two gradually begin to spend more time together as Calvin begins teaching Produce how to play baseball. Their bond ruffles a few feathers. Produce’s jerky young co-worker Colt (Michael Grant) — who also happens to be dating Katie — doesn’t like the idea of Produce hanging around the Campbells. And Calvin’s close friend Milt (Karate Kid hero William Zabka) suggests capitalizing on Produce’s likability to boost his own struggling car dealership.

The movie’s ultra-generic title — Where Hope Grows was originally known as Produce — clouds some admirable virtues. The film might have The Dove Foundation’s faith-friendly seal of approval, but it also manages to incorporate religion into the story in a way that is firm but gentle. Writer/director Chris Dowling’s camera is also more curious and grounded than other faith-based dramas, which seem to give off a beatific glow.

Most importantly, the movie makes Produce a self-sufficient hero as opposed to someone who ought to be pitied. Despite the story’s structure — and its similarity to Radio — the film doesn’t really abscribe any faux-magical Negro qualities to Produce, other than bracing openness and optimism. I’ve already talked about how good and natural DeSanctis is as an actor, but Polaha also deserves praise for being a sturdy, generous screen partner. Calvin and Produce’s scenes have an understated warmth that I found more effective than the movie’s overt finger wagging at the use of un-PC euphemisms like “slow”, “retarded”, and “different” to describe Produce.

Unfortunately, the rest of the cast doesn’t fare nearly as well. Miller is a strong, feisty performer, but her character ends up getting stuck in a bot too much boyfriend-from-hell melodrama. Calvin starts attending AA meetings, but it happens too late in the story to really develop meaningful sparks with the pretty blonde (Brooke Burns) he connects with there. The biggest misstep involves a love triangle between Milt, his wife (The Wonder Years‘ Danica McKellar) and the struggling young singer they welcome into their home. The bulk of this storyline was clearly left on the cutting room floor, but the relationship between these three characters plays a key role in the tragic final act, which made it impossible to completely excise this half-baked subplot.

Even worse is the way that tragic final act is handled. A car accident leaves two lives in the balance, but only one of them makes it. The movie eventually reveals the survivor with a rousing, “Applause” sign flourish. In other words, this supposedly open-hearted drama is (inadvertently) encouraging us to cheer the death of the other character. (Who wasn’t the nicest person in the world, but still.)

It’s an unfortunate misstep that left a sour taste in my mouth. And it’s really too bad because — despite needing some trimming and a more well-rounded supporting cast —Where Hope Grows is otherwise a sensitive, well-intentioned drama.

Where Hope Grows is presented in an aspect ratio of 2.40:1. The 1080p image is arrived at with an AVC MPEG-4 codec at an average of 20 mbps. I alluded to this in the main review, but the film presents a more grounded, earthier image than I’ve seen from glossier faith-based dramas. There’s a slightly desaturated, autumnal sheen to the presentation that doesn’t allow for the crispest detail, but fits Calvin’s gloomy mindset. The pops of color mostly come courtesy of the fruits and vegetables in the grocery store where Produce works. Black levels are solid, but could’ve been inkier. (Especially since that final act car wreck takes place at night.) Overall, this presentation is quite good, if not exactly spectacular.

The DTS-HD Master Audio 5.1 track is similarly workmanlike in its approach to presenting this story. Dialogue dominates here, but there is room for subtle immersion in the rear speakers during exteriors and the scenes inside the grocery store. The subs even get a quick workout during a brief, musical scene set at Produce’s church and for the twangier cuts on Kyle Newmaster’s score. Not exactly a show-off piece for your sound system, but this track certainly accomplishes what it is asked to do.

Audio Commentary with writer/director Chris Dowling and actor David DeSanctis: It’s not exactly surprising to find DeSanctis’s infectious enthusiasm carries over to real life. This is an entertaining, informative track (we learn the opening scene was filmed in DeSanctis’s real-life house) that is dominated by DeSanctis’s energy and his happy memories making the film. Dowling, playing the patient straight man) also deserves credit for the way he sets up his commentary partner.

Stop the R-Word: (1:23) An even quicker PSA for people to stop using the most prominent derogatory term for someone with an intellectual disability. We also learned all cast and crew members signed an “Eliminate the R-Word” pledge.

Deleted Scenes: (10:28) There are eight scenes total, and the most prominent material involves that abbreviated love triangle that nevertheless ends up playing a major role in the story. Features a Play All option.

It’s certainly possible to enjoy this film on its faith-friendly merits, but I found the story a little too crowded and the ending way too manipulative.

The movie’s heart is in the right place, and the filmmakers found a promising performer in DeSanctis. But this story of a disgraced former baseball player — and the relationship that leads him into the light — doesn’t come close to knocking it out of the park. If anything, it’s more like a solid single.