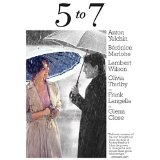 “Life is a collection of moments. The idea is to have as many good ones as you can.”

Anton Yelchin’s reaction to the discovery of the existence of an actual block of time carved out for illicit affairs is probably one of the most comical moments of the film. To further explain, Yelchin’s character has a chance meeting with a beautiful older woman and after a few more scheduled meetings discovers that she is in fact married. The funny thing is the nonchalant way in which she reacts to the revelation, commenting that she told him that she was only available during the hours of 5:00 PM to 7:00 PM. I now find myself wondering if this a real thing in European cultures. Have other societies set a time block for having affairs? If so, I suppose that‘s efficient.

As mentioned in the previous paragraph, the character of Brian (Yelchin) meets Arielle (Bérénice Marlohe) on the streets of New York. Brian is instantly captivated by her beauty, and he proves that fortune favors the bold by striking up a conversation with someone completely out of his league (let this give motivation to do those who are shy). Arielle appears to be equally taken with Brian, and the two schedule another meeting. With every meeting, their rapport builds until Brian acts and kisses her. Arielle is receptive to the kiss and in essentially the same breath alludes to the fact that she is married with children.

Taken aback, Brian’s first instinct is to pump the brakes on the courtship; however, Arielle goes on to explain the situation further. Apparently she and her husband have an arrangement which allows for affairs. Unconventional to say the least, Brian is faced with the decision of whether this is something he finds himself capable of being part of. Olivia Thirlby, Frank Lagella, and Glen Close round out the cast in this funny and refreshing unconventional love story.

First thing to mention is how refreshed I was to see a story which unfolded in this manner. Generally love stories have obstacles that the lovers have to overcome, but in reality in this tale everyone is apparently OK with the idea the two engaging in an extramarital affair, everyone except Brian, that is. That is the driving force of the movie, as the audience attempts to navigate this brand new and awkward social convention with him. Points for ingenuity here, because before I would have assumed the idea of the husband and the mister (I’m not sure what the male version of a mistress is) occupying the same space without armed conflict as impossible, but it was actually developed in a realistic manner, addressing the difference between American and European customs. I also imagine the husband’s understanding stemmed from him having a mistress of his own, who actually becomes Brian’s confidant in this new world of his.

Though the overall direction of the story was predictable with the conclusion being a bit of a forgone conclusion, the film did avoid one major cliché that I anticipated it was going to fall into. I was pleased to see that it avoid that pothole. Chemistry is key in this story, Yelchin and Marlohe do take a moment to find their rhythm, but once they do the rest is magic. Perhaps it was just the shock of seeing the two together that throws it off initially, because the two are a bit of a mismatched couple, which is alluded to by Yelchin’s father in a certain reference to The Graduate. It is not an overly funny tale, with most of the funny portion delivered by Langella in the role of the father or through means of awkward and uncomfortable situations. There is a theme about certain experiences which have a way of altering the course of our lives that watchers will be able to relate to. That was single greatest moment of the movie in my opinion, watching this experience have a profound effect on the course of the main character’s life, as it’s highly likely that he would not have become who did without such an experience.

Jeremy Butler is a film school graduate of the International Academy of Design and Technology. He is been writing for Upcomingdiscs since 2012; however, movies have played a big part of his life for much longer. Favorite genres include horror, science fiction/fantasy, and comedy. Favorite movies are V for Vendetta, Boondocks Saints, Kiss Kiss Bang Bang, and The Godfather.
Elementary: Season 3 The Walking Dead: Season 5 (Blu-ray)