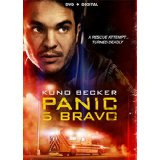 I consider myself an optimist, so even when something looks bad, I try to look for the good. I searched for 84 long, painful minutes to look for good in Panic 5 Bravo. It’s a tale of four paramedics in an ambulance at the edge of the US/Mexican border that I, sadly, don’t ever give a dang about. There’s Richard, a curmudgeon days away from retiring; Josh, the rich-boy newbie; Bobby, the good-oops no bad- girl, and Alex, the eye-candy –a golden-retriever loving Mexican-American who is getting ready to propose to his girlfriend. Kuno Becker (Alex) also wrote, directed, and starred in the film. Just within the first few minutes of the interior shots of the ambulance which we never leave, there’s a lot of F words for the sake of filling up a script with a lot of holes, I guess.

A disgusting penal initiation hazing of the rookie Josh by the three older paramedics gets interrupted by a call of 5 Bravo. The crew watches as a young man just a few feet away lies on the ground bleeding to death from a gunshot wound on the Mexican side of the border. The four watch what unfolds without moving and discuss meal options. Finally paramedic Alex pleads with his coworkers to drive illegally into Mexico to rescue the shooting victim. These four geniuses decide with Alex’s prodding to venture where they have no business being and rescue a man who unbeknownst to them is wanted by the cartel – well not the man, but drug-filled condoms inside of him. Guess what — predictably bad things happen… like the cartel bad guys using a vehicle to ram and flip over the ambulance.

And there’s blood. Yes, I know there’s blood in a car accident, but these guys looked like the prom scene from Carrie. Overkill much?  The film is labeled as mystery and suspense, so maybe I’m desensitized from the horrors in our every-day recent newscasts, but I felt no tension.  The film is not badly made; the acting above a B-level movie, and maybe with a superior script, it could have kept me wanting more. My husband, who loves these types of action movies, left the room to watch old episodes of Firefly on demand. The paramedics are trapped in the ambulance and hear noise outside, begging for help – to call the Mexican paramedics – because OF COURSE the connection to base was destroyed in the accident and the cell phones of ALL FOUR paramedics are dying or close to death, and no one on the entire ambulance brought a charger with them.

“I am the ambulance, the police, everything,” the cartel leader cries out, identifying himself as foe, not friend. The cartel is just outside taunting them. For quite a while we see close-ups of each actor and only get to hear the cartel’s threats. Why it takes almost four-fifths of the movie for the equally-brilliant cartel to force their way inside of the ambulance is completely beyond me. Along the way the Mensa candidates inside the ambulance follow the instructions of the cartel and reach through a tiny hole in the side of the ambulance to hand out their phones and wallets. We also discover – da dum dum dum – Bobby works for the cartel. Oh no, is she going to have to kill her band of brothers? But first let’s make sure she’s the only one in the whole movie who has to change her bloody clothes on camera for a flash of belly and bra.

Raise your hand if anyone can tell me what happens when the Mexican cartel has your home address? Let’s just say Alex can save on dog food and bring back the ring.  Listening to the sound effects of this particular scene made me sick to my stomach, but maybe that’s the response that Becker was hoping for.  Yes, eventually everyone but eye-candy dies, and the gun is literally turned on us. My first, actually, only thought: thank God.