Posted in: No Huddle by Archive Authors on September 3rd, 2015 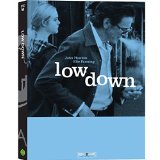 Low Down has a fantastic cast for a low-budget film including John Hawkes, Elle Fanning, Glenn Close, Flea, Taryn Manning, Tim Daly, Billy Drago, Rain Pheonix, Lena Headey, Peter Dinklage, and Burn Gorman (the last three are alumni of Game of Thrones, which couldn’t be farther in tone and content from this movie). It is the true life story of jazz pianist Joe Albany from a book by his daughter, Amy-Jo. The only thing that clearly marks the time period that the film takes place is a brief excerpt of the Watergate hearings in 1974 but has the feel of a time maybe a decade before. That is part of the beauty of a film like this. It is so subtly clued into detail. The essence of the movie is layers of detail that reveal character. It is the kind of movie that isn’t made much any more. It is pitch-perfect in depicting an old school naturalism which requires your understanding and commitment.

The main character of Joe Albany (played brilliantly by Hawkes) is defined both by his love and sensitivity and by his weakness. Joe Albany was an outstanding musician afflicted by the addictions that many jazz musicians succumbed to. His heroin habit was something that he constantly struggled against, but he always tried to put his daughter first. Elle Fanning (the sister of Dakota and the star of Maleficent and Super-8) is luminous as the daughter who was loyal and loving to her father as she watched him struggle in a losing battle against the drug. Her mother, Shelia (Lena Headey) shows up from time to time, and she is the kind of mother who has a suitcase laced full with a plentiful supply of alcoholic miniatures. She’s the kind of mother who falls flat on her face unconscious in the living room after a reunion dinner. Amy-Jo always remains sweet and loyal, no matter how sad and tawdry their circumstances become. Equally supportive and long-suffering is Joe’s mother, played by Glenn Close with a dowdy lack of vanity. Joe and Amy-Jo live in a low-rent, low-down hotel in downtown Los Angeles full of oddballs, junkies, and prostitutes. Not the easiest place to stay straight, but Close’s character is a tower of strength, always ready to help in any way.

Low Down is not the kind of movie that explains or overdramatizes. It just shows us human nature unfold, and we instinctually get it. The father is no good at being a father, but that doesn’t mean he isn’t trying really hard. The daughter doesn’t understand the father, but that doesn’t mean she wouldn’t do anything for him. It is a story that is very common but not usually accurately portrayed because the dynamic can be hard to understand. Children of troubled parents always tend to step up to compensate for the lack of guidance.

Low Down is a film about people looking for truth and paying the consequences for it. You didn’t play jazz, even then, for money. It was something you did for love and a passion for unexplored territories and the rush of improvisation. The rewards are all spiritual. Why did so many of those musicians succumb to addiction? There is no easy explanation. Maybe it was the loneliness of knowing you are great but only occasionally being recognized and acknowledged. Maybe it’s just the late-night club lifestyle. Joe Albany was an acknowledged master but often led a life of a bum or a convict, in and out of jails and rehabs. Albany is acknowledged now, years after his death. Flea and Anthony Kiddis of The Red Hot Chilli Peppers were producers who were instrumental in getting the film made. Flea does some of his best work as an actor as a kind of Chet Baker clone who is a fellow musician drowning in a surrender to drugs. Director Jeff Preiss is best known previous to this for directing the documentary on legendary jazz trumpeter Chet Baker called Let’s Get Lost. The DVD has terrific extras including a commentary, a featurette on set, and a terrific set of interviews with Flea and Amy-Jo, who it turns out have amazingly similar experiences with heroin- addicted, jazz-playing fathers in Hollywood.
Being low and down and out is one thing, but getting the lowdown on something is getting the dope, getting the real deal, getting the skinny. Low Down is a movie that shows both those qualities. It shows you that sometimes you can be down and out and still find the truth. Joe Albany was touched by greatness but never really got to enjoy it. He realized his truth was that in the end he just really did like to get high. It didn’t mean he wasn’t a good person.