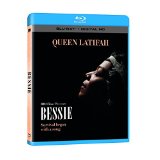 “You got the St. Louis blues, the Chicago blues, the gin house blues, the “my man done left me” blues…they all the same song, ain’t they?”

By now, anyone who’s seen a musical biopic realizes these films also whistle a pretty similar-sounding tune. The bad news here is that Bessie is no exception, rushing from one familiar Troubled Artist Beat (hardscrabble childhood, rise to stardom, substance abuse, troubled marriage, etc.) to the next. The really good news is that this HBO biopic of “Empress of Blues” Bessie Smith is elevated by some truly powerhouse performances.

The movie opens with a quick glimpse at a downcast Bessie Smith (Latifah) at the height of her fame in 1927 before jumping back 14 years. In one of the most inspired sequences, this livelier version of Bessie goes directly from mixing it up with a random hoodlum in a back alley to sauntering on stage and belting out a song, even as the cut from her forehead begins to visibly bleed.

Bessie chronicles the title character’s fateful meeting with Ma Rainey (Monique), a more established and business-savvy blues singer who takes Bessie under her wing. Given the title of this biopic, it’s no spoiler to say Bessie’s star eventually outshines Ma Rainey. Her resulting fame brings her attention from a variety of men — including the irresistibly dangerous Jack Gee (Michael K. Williams) and soulful bootlegger Richard (Mike Epps) — as well as women. (Bessie absolutely does not shy away from its subject’s bisexuality.)

“So what make folks wanna hear from you?”

Unfortunately, that’s not enough to make Bessie standout from the crowded musical biopic chorus. Although there are absolutely moments here that pop — black female performers had to submit to a humiliating paper “bag test” to see if their skin tone was suitable for a show —they all occur within an overly familiar structure we’ve already seen and heard in movies like Ray and Walk the Line. (We’ve also seen that structure lampooned in Walk Hard.) Even the combustible relationship between Bessie and Jack Gee feels like a stealth prequel to the fisticuffs of What’s Love Got To Do With It.

Here’s the thing though: I really enjoyed each of those films I just mentioned. So while it sounds like I’m being hard on director Dee Rees — working from a script she wrote with Christopher Cleveland and Bettina Gilois — the musical biopic formula is a formula for a reason: people respond to it, and I definitely enjoyed Bessie. I just wish Bessie had been bolder and taken more stylistic chances in presenting the life of its barrier-breaking subject. (The scene where Bessie performs for a white audience, featuring Oliver Platt in an extended cameo, isn’t quite as long or tense as it could’ve been.) It might actually be a case of there being too much story here; the film hopscotches between dealing with Bessie’s race, sexuality, and sudden superstar status, but doesn’t always settle on an issue long enough for it to make an impact.

On the other hand, Rees does have an impressive eye for period detail and atmosphere, particularly during any scene where Bessie is living large. She’s also helped by a career-best performance from star/producer Queen Latifah, who was first attached to this project more than 20 years ago. (That helps explain Latifah being too old for the part; the 45-year-old actress looks great, but she’s playing Bessie as young as 19 years old per the movie’s timeline.) Latifah acquits herself quite well during the musical numbers, despite sounding more like “Queen Latifah Sings the Blues” than “Bessie Smith.” However, the real power in her performance comes from watching her develop Bessie’s down-home majesty on stage. Latifah is also just as good when the movie is loud (both on stage and off) as she is during quieter moments (including the most revealing scene in the actress’s career). It may have taken an extra decade or two, but this really is the role Latifah was born to play.

The supporting cast is equally electric. Monique — resurfacing just in time to remind people why she has an Oscar — is magnificent as the wiser, bawdier Ma Rainey. (I particularly enjoyed the scene where Ma uses an empty performance hall to show Bessie how to work a crowd.) The actress doesn’t do her own singing, but her own smoky speaking voice makes her a natural for the period. She’s so good, the movie’s light inevitably dims a little when Bessie and Ma go their separate ways much too quickly. Williams — looking totally at-home in his Boardwalk Empire period garb — is certainly a live wire, but he’s also a strong enough actor to show that Jack really did love Bessie in his own twisted way.

Khandi Alexander doesn’t get a ton of screen time as the poorer sister Bessie left back home, but is quietly terrific whenever she’s on screen. Same goes for Mike Epps’ uncharacteristically subtle dramatic work as romantic Richard, as well as Tika Sumpter’s gentle work as Lucille, a steady romantic interest of Bessie’s.

Bessie concludes on a curiously hopeful note that makes no mention of the singer’s real-life end. It’s a surprising omission given the kitchen-sink approach this biopic took in chronicling everything else about Smith’s life. However, I also found it to be a refreshing respite from all the heartbreak and hollering that preceded it. That ending is probably the most noteworthy swerve in a musical biopic that otherwise plays out like a favored record you already know inside and out.

Bessie is presented in its original aspect ratio of 1.78:1. The 1080p image is arrived at with an AVC MPEG-4 codec at an average of 36 mbps. As you can imagine, a good portion of Bessie takes place in dark, smoky blues clubs. So it’s a good thing the black levels here are fantastically deep and inky. Rees and cinematographer Jeff Jur also bathe many of the musical performances in different hues (red, blue, gold) that show what this HD image can do. The film largely takes place in the South, so there’s also some pleasing sunniness along with clean, panoramic exterior shots mixed in with all the club scenes. On top of that, there is plenty of fine detail on display, which makes you appreciate the work of costume designer Michael T. Boyd. I wish there’d been some grittiness infused to make this feel a bit more authentic to the period, but this is overall another impeccable effort from HBO.

The DTS-HD Master Audio 5.1 track more than rises to the musical biopic challenge. The blues performances take full advantage of every speaker, which isn’t exactly a shock. What really sets this track apart is the separation and specificity across the channels. I was particularly wowed with the buttery bottom end, which shows off a subtler, less room-rattling side of your subwoofer. Not surprisingly, the track’s effectiveness extends beyond the blues clubs. This is a dynamic (there’s good directionality during a Klan attack) and enveloping track that succeeds in bringing Bessie Smith’s music to life.

Bessie — A Creative Journey: (18:35) Emphasis on the word “journey”, since we learn this biopic was more than 20 years in the making. (A version of the film written by the late Horton Foote was almost made in the ‘90s.) The coolest part is seeing footage from a 1996 screen test with Latifah. Otherwise, this is your pretty standard lovefest, with the uncommonly emotional cast heaping praise on their young director and each other.

Filming in Georgia: (3:43) A short and sweet featurette about filming on location, including a few areas that were likely visited by the real-life Bessie Smith.

The good news/bad news here is that Bessie left me wanting more. This is an instance where I believe HBO would’ve been wise to turn this into a three-part miniseries that gave each chapter in the legendary blues singer’s life (her family, her recording career, her marriages/relationships, etc.) more space to breathe.

However, what we do get is mighty impressive, even if it ultimately feels a little incomplete. This is worth checking out solely for the toe-tapping music and career-best work from the likes of Latifah and Monique.