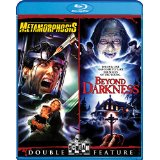 The films in this BluRay double feature are connected through two commonalities: the actor Gene LeBrock, and each having an Italian director. The films were produced around the same time, one in ’89 and the other in ’90, and they are both your typical schlocky Italian horror films. Although they may not be as noteworthy as the films of Mario Bava or Dario Argento, they most certainly emulate many of the aesthetics within the “giallo” genre. In other words, where they lack in story and acting talent, they make up for in cinematography, set design, and editing.

Metamorphosis follows Dr. Peter Houseman (LeBrock), a geneticist whose research is geared to develop a formula to stop human aging. Having exhausted the previous year’s grant money, his research must be reviewed in order to progress with funding. Having not published any of his findings, the College Board does not grant him money to continue his research, but he manages to convince the woman who writes the grants (Cathrine Daranov) to observe his research for herself. Running out of time and test subjects to prove his theories, Dr. Houseman injects the formula into his own brain with horrifying results.

Beyond Darkness once again stars Gene LeBrock, only this time he plays a man of God rather than a man of science. Father Peter (LeBrock), his children, and his wife Annie (Barbara Bringham) move into an old house owned by his church. Unbeknownst to the family, the house was once a site of a horrifying execution of witches. It is up to Father George (David Brandon), an estranged priest, who has all but lost his faith, to battle his inner demons and the demons haunting the family.

These films are a little drawn out, and I have to say that is my only complaint. They are each typical feature-length films (around 90 minutes long), but they become incredibly slow-paced after the introductory actions. However, each film has a strength that really makes up for the slow pace and terrible dialog. For Metamorphosis, the strength can be found in cinematography. It has really innovative camera movement that captures the eye when you least expect it to. For Beyond Darkness, there are many brilliantly designed sets and costumes that draw your attention so well, especially the “alternate dimension” of the house.

I am not very familiar with the work of G.L. Eastman (born Luigi Montefiori), but I can say his film Metamorphosis is very clearly influenced by Ken Russell’s Altered States. There are very clear differences, but the similarities between the two are too great not to note: scientist conducts experiments on himself and scientist devolves into humanoid beast as a result of said experiments. However, the film does stand on its own, so I wouldn’t call it a remake. It simply draws heavy influence from Russell and other prominent horror films in the 1980’s.

When it comes to Claudio Fragrasso, I could speak at great lengths regarding his career. For the sake of keeping my review short, I will not. However, I will say that Beyond Darkness is part of a very specific breed of film that I absolutely love: the sequels of Claudio Fragrasso. Fragrasso is probably best known for directing the sequel to Troll, an 80’s horror film about a troll king terrorizing San Fransisco. Fragrasso’s Troll 2 is so far from the original storyline and incredibly bad that it has developed a very large cult following. Beyond Darkness fits the bill as a sequel, because the original Italian title is La Casa 5, translating to House 5 in English.

This is a fantastic bit of trivia for any horror film fans. I was completely unaware there was a forth installment of the House series, but watching a few scenes from Beyond Darkness again, I can really see the similarities. Despite having a completely different story, the formula set forth by the first three House films can be scene in Beyond Darkness, especially the alternate dimension hidden within the house’s walls. This BluRay combo pack is a great find for any Claudio Fragrasso fan or any general fan of Italian and/or 80’s horror films.