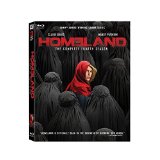 “You need to promise…something goes wrong, you need to drop a bomb on this whole mess.”

The biggest literal bang on Homeland came courtesy of the explosion that wiped out CIA headquarters in the season 2 finale. However, many fans and critics would argue the subsequent third season was an even bigger bomb. (I thought season 3 at least finished strong following that dismal start.) Nevertheless, season 4 of Showtime’s cracked, crackerjack spy drama represents a soft reboot for the show. It’s also a return to its Emmy-winning season 1 form.

Since this is Homeland’s first appearance at UpcomingDiscs, I’ll offer a quick synopsis. The show centered around Carrie Mathison (Claire Danes), a brilliant and (secretly to her superiors) bipolar CIA operations officer who suspected that recently rescued U.S. Marine Sgt. Nicholas Brody (Damien Lewis) was working for al-Qaeda. If you want to see precisely how that turned out, I *highly* recommend you pick up seasons 1-3 and sort through all the duplicity and double crosses at your own pace. I’ll just say that Lewis was so damn good — and his on-screen chemistry with Danes was so electric — that creators Howard Gordon and Alex Gansa almost certainly kept Brody (and his family) around longer than what was prudent for the overall health of Homeland. The show is also based on an Israeli series called “Prisoners of War”, which only ran for two seasons. That means Homeland has been free to chart its own path for quite a bit of time now.

Season 4 begins with Brody gone (although a few traces of him do resurface, most notably at the end of Ep. 7/“Redux”) and Carrie working as a CIA station chief in Afghanistan. Carrie has largely traded in the complex spy games that made her a legendary operative in exchange for tactics that earn her the nickname“Drone Queen.” After an explosion meant to eradicate dangerous Pakistani terrorist Haissam Haqqani (Numan Acar) also wipes out a wedding reception full of civilians, Carrie and the CIA station chief in Pakistan (Corey Stoll) who offered the Haqqani intel land in some hot water. Carrie and her trusted black ops spook Peter Quinn (Rupert Friend) travel to Pakistan to find out how things could’ve gone so wrong and (without spoiling too much) all hell breaks loose.

“Carrie, here’s the thing: it’s not about you.”

The disastrous aftermath eventually brings Carrie and Quinn to Pakistan on a longer-term basis, along with Carrie’s former mentor Saul Berenson (Mandy Patinkin), who has moved into the private sector and offers to lend a hand. Homeland temporarily lost its way when it became much too fixated on the ill-fated Carrie/Brody romance. While Carrie is still very much the main character in season 4, she shares some of the major thematic responsibility with Saul and Quinn.

Each member of that trio finds it impossible to walk away from their fundamental persona over the course of these episodes. “Drone Queen” Carrie falls back into old habits and utilizes all her assets to manipulate a naive Pakistani college student (Life of Pi’s Suraj Sharma) who survived the Haqqani bombing. (Get ready to cringe at the end of Ep. 4/“Iron in the Fire.”) Saul is so unfulfilled with his private sector work that he’s a little too eager to jump back into the spy game. And Quinn simply can’t turn off the switch that makes him a fantastic operative in the field, but a haunted, violent loner in “real life.”

The arc of those three characters is probably handled with more care than the overarching plot of the season, which depicts the troubled relations between the U.S. and Pakistan. (And you don’t have to use your imagination to swap in a number of nations in Pakistan’s place.) While Carrie and Co. target terrorists like Haqqani, they have to deal with their Pakistani counterparts in the intelligence community, who might be willing to take extreme measures to kick the U.S. out of their country. Co-creators Gordon and Gansa previously worked on 24, and Homeland has widely been considered the grittier, more prestige-y take on the modern war on terror. (At least until everyone agreed that Homeland itself went off the rails.) But here’s the thing: Homeland was *always* as crazy as its main character.

I don’t want to sound like I’m diminishing the feelings of people who have been offended by their depiction on the show, but just because Homeland happens to be more realistic than 24 doesn’t mean it’s actually realistic. (Especially when the alternative is making up fictional antagonists from Kerplakistan.) In my opinion, this has always been a thoroughly ridiculous (and wildly entertaining) show that happens to be set in the modern geopolitical arena. And if you judge it on those merits alone, season 4 of Homeland is pretty much as good as it gets.

Season 4 gets off to a fast start with that wedding bombing in “Drone Queen” and its aftermath. However, the season’s best run of episodes kicks off at the halfway point, starting with the relentless tension of Ep. 6/”From A to B and Back and Again” (a key character is cruelly killed, while a beloved figure is kidnapped) and continuing all the way through action-movie theatrics of Ep. 10/”13 Hours in Islamabad” (essentially Die Hard in an embassy, with the death of a regular character thrown in). Practically every one of those installments (Eps. 6-10) ends with an “I’ve gotta see what happens next!” cliffhanger. As a result, it’s no surprise that the final two episodes of the season — especially low-key finale “Long Time Coming” — are relatively subdued.

Homeland‘s production values remain top-notch — South Africa subbed in for Pakistan — and the acting has never been better. Danes deserves every award she has won for playing Carrie, and it’s not just because she is the best crier in the business. In season 4, we get to see a chillier, more detached side of Carrie to go with the occasional bursts of crazy, which is sort of an inverse ratio from what Danes has had to play so far. Of course, those bursts of crazy are epic, whether she’s hallucinating at the end of “Redux” or uncomfortably playing hot potato with the daughter she wants nothing to do with.

The boundlessly talented Patinkin, who has normally exited TV gigs by now, continues to be an indispensably calming presence on Homeland among all the crazy. That’s why it’s so hard to watch Saul go through his most (physically) grueling ordeal yet. Friend has turned Quinn, a character that didn’t seem like much on paper, into a genuinely compelling figure. His struggle to adapt to “normal” life is interesting enough that I wish the show didn’t feel obligated to push him as a potential love interest/Brody replacement for Carrie. Besides Sharma’s conflicted, refreshingly openhearted work, Season 4 had some impressive guest performances, including Raza Jaffrey as the friendly(?) Pakistani intelligence chief…who *also* has a crush on Carrie. I also got a kick out of seeing Michael “Noonan” O’Keefe’s comically sour work as the CIA deputy station chief who was passed over in favor of Carrie. Mark Moses impressively reeks loserdom as the shifty, desperate husband of the steely, stressed U.S. ambassador in Pakistan (Laila Robins). And F. Murray Abraham occasionally resurfaces as unapologetically slimy black ops specialist Dar Adal, who plays a key role in the finale.

When I watched the show live last year, I felt that finale was something of a letdown. But after plowing through the season in one sitting, I appreciated the breather. Season 4 marks the point where Homeland once again took my breath away because it impeccably delivered non-stop thrills…and not because I was scoffing non-stop out of exasperation.

Homeland: The Complete Fourth Season is presented in its original aspect ratio 1.78:1. The 1080p image is arrived at with an AVC MPEG-4 codec at an average of 24 mbps. Much of the action is set in Pakistan, which gives the majority of the episodes a bright, sunny, yellowish palette with pleasingly warm tones. Those scenes are offset by the oppressively dark sequences set in dark CIA control rooms or horrific prison cells, and fortunately the deep black levels here are up for the challenge. Digital noise pops up only rarely and is most noticeable during the darker scenes; besides, it actually lends the image some credible grit during the daytime scenes in Islamabad. Fine detail and clarity are generally tremendous and striking. I mentioned the show’s top-notch production values earlier, and that certainly extends to the visual presentation on this Fox Blu-ray.

The DTS-HD Master Audio 5.1 track is, in my opinion, even better and livelier than the terrific visual presentation. The show’s trademark jazzy soundtrack and atmospheric sound effects from the outdoor Islamabad scenes harmoniously share space on the rear channels. Immersion becomes subtler, yet no less effective when the action moves indoors and into those CIA control rooms as they buzz with activity. Yet as much as I appreciate those fine bits of sonic detail and how well calibrated every element is presented, this track also flat-out packs a wallop when the action explodes on screen. (Most notably in “13 Hours in Islamabad.”) This may not be the most obvious showoff title for your sound system, but it serves as a wonderfully dynamic example all the pieces coming together.

All of the bonus material is presented in HD and available on Disc 3.

Deleted Scenes: (10:52) There are seven scenes total, and they are all well-acted/well-written pieces that simply felt a bit extraneous. (As opposed to being totally disposable material.) The best of the bunch features a meeting between Carrie and Jaffrey’s Aasar Khan, but my favorite thing about these scenes is the hilariously literal title for each chapter. (For instance, one is called “Haqqani Won’t Let Saul Provoke Him.”) Features a Play All option.

Homeland Character Profiles: (16:56) Includes “Peter Quinn: The Assassin” (which reveals how little there was on the page when the character was introduced in season 2 and charts his evolution), “Aasar Khan: The Lieutenant-Colonel” (the fact that they gave him a character profile makes me wonder if Khan will play a role beyond this season), and Fara Sherazi: The Analyst (which traces the Muslim CIA analyst’s arc on the show). Overall, these feature good insight from the actors who play each character, and I liked that they explore their entire run on the show (rather than just focusing on Season 4). Features a Play All option.

Script to Screen: (23:17) These are essentially mini-docs dedicated to a different aspect of the season, and each of them offer an intriguing look at the TV-making process. “Caught in the Crosshairs: Aayan’s Journey” has the writers revealing the effect Sharma’s character has on Carrie and how it reveals the ways she has changed since we last saw her. “Brody’s Return” is my favorite of the bunch because of the detail paid to visual storytelling in presenting the season’s most intimate, heartbreaking surprise. It’s also a good contrast to “Storming the Embassy”, which covers the creation of season 4’s biggest action set piece. (And the writer’s rationale for killing the regular character they decided to do away with.) Features a Play All option.

Homeland: The Complete Fourth Season features all 12 episodes on three discs. I would strongly encourage anyone who checked out on the show over the last couple of years to give this version of Homeland a shot. Odds are you’ll get hooked all over again.

Season 5 is set to debut Oct. 4, and I’m very hopeful that the series will be able to maintain its newfound momentum.