Closer to the Moon

Posted in: No Huddle by Jeremy Butler on September 23rd, 2015 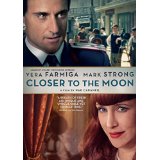 Closer to the Moon has quite an intriguing premise behind it. Six people pull off a daylight bank car robbery in the highlight of the socialist era, which we all recognize as a time when crime was believed to be a capitalist byproduct. Mark Strong and Vera Farmiga headline the cast as two members of the convicted six who are scheduled for the crime; however, before they stand before the firing squad, they are ordered to star in a real-life film adaptation of their crime to serve as an educational video.

Despite the gloomy premise, the film is actually very upbeat with the condemned men and one woman essentially making the most of the time they have left rather than spending their time dreading their fate. At one point, Strong’s character actually commandeers the director spot (in the fictional film) for the film due to the director’s inebriation. The film also develops in an interesting way with the details of how the plan for the heist came about as well as the actual heist itself being a mystery until midway through the film. There is further intrigue due to the primary antagonist’s belief of a deeper conspiracy being in the works and his dedication to attempting to unearth it by any means necessary.

Strong is quickly rising to becoming one of my favorite overall actors; however, it is not he that I was most impressed with this time around, as much of the film is viewed from the perspective of the introverted cameraman Virgil (Harry Lloyd). Lloyd resonates the best with his character in my opinion, aptly portraying the mannerisms and nuances of someone that is slightly socially awkward and fascinated by the new world that he finds himself thrust into. His most pivotal scene was likely when confronted by the antagonist Holban for the information he was tasked to obtain, and his innocent denial actually made me laugh out loud. There is also very good chemistry between Lloyd and Farmiga, given that they only share a few select scenes together. That said, I think the amount of time the two spent together was the perfect amount; otherwise the producers risked venturing into tragedy with the prospect of a happy ending being bleak at best.

Despite the nearly two-hour running time, I never found myself checking the time to see how long I had been watching, which was a minor miracle in itself if you ask me. In fact, the film makes great work of the time it has to work with, and I believe much of that is due to the unique style in which the story unfolded. By midway through the film, I was eager to know how the group pulled off the heist, especially after watching how the whole idea was hatched and hearing their motivation behind the decision to proceed. As far as motivations go, I will say that this was definitely a new one for me, especially considering the knowledge that they would not only likely be caught but absolutely be caught and they still went through with it makes for sheer entertainment.

This was a unique film in itself, especially in regards to story development and upbeat presence. A comedy rather than a tragedy, worth watching for those who are interested in foreign films with familiar faces. Something to watch if you are searching for a good time instead of melodrama.

Jeremy Butler is a film school graduate of the International Academy of Design and Technology. He is been writing for Upcomingdiscs since 2012; however, movies have played a big part of his life for much longer. Favorite genres include horror, science fiction/fantasy, and comedy. Favorite movies are V for Vendetta, Boondocks Saints, Kiss Kiss Bang Bang, and The Godfather.
The Journey Home The Seven Five