Posted in: No Huddle by Archive Authors on September 23rd, 2015 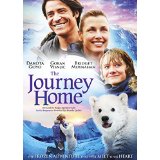 Our story follows Luke, the son of a wildlife protection advocate, who is left to his own devices while his mother is off doing her job. During his night of freedom, Luke has a chance encounter with a mother polar bear raiding his shed. The police have been tracking this polar bear and take her away. Shortly after the polar bear is taken, Luke finds the mother polar bear’s son and starts his journey trying to get this cub home. With the help of an ex-friend of the family, MukTuk, the two try braving the harsh ice surrounding their home in order to reunite the bears at a far off retreat.

I think being led into this movie by two previews for upcoming films about talking dogs protecting their home from invasion set the tone of this story perfectly. This movie did nothing to set itself apart from the pack of other animal-centric films in the same class. The premise can easily be compared to Free Willy, Dunston Checks In, My Dog Skip, or any other dozen human-child-meets-animal movies. The only difference in this movie is that it has a baby polar bear. Coincidentally the only thing this movie did for me was show me how cute baby polar bears are; however, considering that the creator was trying to push a message throughout the entire length of the film, I don’t think my appreciation for the cuteness of baby polar bears is going to be enough. This movie has the same “older man with nature knowledge” as Free Willy and other movies. It has the same “tear-filled goodbye scene” as every stray animal movie. The only thing this movie does is tell future creators that they can make the same movie over and over, as long as they use a new animal every once in a while.

What really kills me about this movie is that there is no real drama besides “boy gets cold,” “polar bear is lost/adorable” and “man might have been responsible for the death of boy’s father.” Everything is so cut and dried, and the moment they try something new or interesting it is dropped off; for example, there is a scene where MukTuk and Luke try to hitch a ride with some hunters. This scene had a great opportunity to become the highlight of the film, but the creators just left it. The only thing this scene really did was show us that hunters are drunks who like to kill bears for sport. There was nothing done with the scene besides showing us that these hunters weren’t nice. I also don’t know why this polar bear was basically treated like a large dog. If the introduction of a non-domestic animal does anything for a movie, it is being able to explore your horizons on how humans and that animal would react (like how I don’t treat cats in the same way I treat dogs). When this bear is first introduced to us he is basically an untrained dog, destroying the house, being able to understand human tone, etc. The only thing more out of place then the bears demeanor is when Luke says his father’s “famous saying.” It is out of nowhere, like I was really worried that this kid might have suffered some sort of ice-related mental illness when he started randomly quoting things at a bear cub. Yes, the saying was about going home, but there were so many places where that phrase could have been better utilized (like when the bear’s home was within site). In that same “out of place” vein, it was really weird to see hanging whale blubber/meat in a movie about wildlife preservation. I’m not one to shy away from meat, and I can understand that this could have been culturally relevant to the people it was portraying, but it was awkward. It’s like seeing someone buy a hamburger while they are trying to sell you on stopping the testing of products on animals. Not the same argument, but still makes you seem like your priorities may have been mixed.

The shots in this movie were almost as sub-par as the storyline. Yes, there were lots of pretty shots of the ice/wildlife, but the camera quality is so infrequent that it is hard to keep up. A good example of this is when Luke falls into freezing water with the polar bear cub. The entire scene feels like it was pieced together in a hurry. We are given clear shots of a worried Luke; grainy, documentary-styled shots of ice breaking up, and some sort of middle ground between the two shots to catch the reactions of the bear cub. They seemed to use three different qualities of cameras to capture one moment. While I love seeing muti-cam shots, when it’s used here it makes the movie look unprofessional. When you mix these types of shots with overly cliché music that might as well have been called “we used this in every other movie involving ice and animals mixtape, like Snow Dogs and Eight Below”, it makes the entire movie suffer.

Much like the rest of this movie, I don’t have many positive things to say about the acting.  Almost the entire cast acts like they are being filmed. No one seems in the moment like actually dedicated getting the audience’s attention. The main character can’t emote to save his life. When he is given his options on what to do with the bear cub, the actor, Dakota Goya, seemed to have the same baseline for how to react to everything. Say some words and walk away. When he is recording a video message for his mom I never feel like he actually cares; he just puts on a more somber monotone. Speaking of the mother, the only decent acting comes from her, and I can only call it decent because the actor seemed to actually care about the fate of her character’s son.

In the end, if you want to see a movie about animals, I suggest seeing something else. This movie does nothing to distinguish itself from the crowd, so you won’t have to look hard to find a similar movie. Unless you have a soft spot for polar bears, stay away.