Posted in: No Huddle by Archive Authors on September 24th, 2015 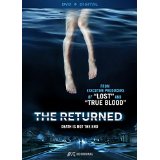 We join the residents of a small mountain town four years after they are stunned by the deaths of an entire class of children. One of these children has returned from the dead and shocks her family with a sudden appearance. She has no memory of the events that led to her death, nor does she remember anything about the afterlife. To her it’s just another day, and she is just waking up after a prolonged blackout. The family soon realizes that their daughter is not the only person to have returned from an alleged death, and questions soon arise as to how these people are suddenly coming back to life. Why is this happening? Why them? What are they here for?

In good conscience I can’t review this series by the episode, since this is a series that holds most of its luster in plot twists or shocking reveals. I can tell you that I think this series is going to find a nice home amongst mediocrity. The premise was intriguing in a sort of “what if the dead returned to life and weren’t trying to eat our brains” kind of way, but the series barely holds onto it. At first I expected a load of drama since these people were coming back to families who were either, A) well into the process of moving on, or B) already moved on. This was a strong selling point throughout the series, but then it started making some weird turns. I don’t know why “the returned” needed special powers; it spoiled the drama. I don’t know why elements of horror were splashed in at random, inappropriate times. For instance, after we were just going through a large ordeal with a character, we were then treated to a scary ordeal with a separate character. This is a complex that the series seems to deal with throughout all of the episodes. Each character seems to have their own set genre, which starts out interesting but ultimately becomes confusing and leaves me with questions like “Am I supposed to be scared right now, or sad?” The other problems with this story stem from a creepy kid and an unsurprising conclusion. First, the kid, who goes by Victor, had a lot of potential but just turns out to be another Damien-esque character. I was expecting for him to just be this misunderstood kid who dealt with a lot of trauma from his death; instead I got a homicidal maniac who is looking for a matriarch and will kill anyone who gets in his way. The kid being homicidal was over the top; the kid not learning anything from his years roaming the earth was extremely dull. Second, I can’t go into the ending too much, but let’s just say that anyone could see it coming. When a big climax is that easy to call in a series, there is a major problem.

The great thing about this series is that it is following in the footsteps of all the other major television shows coming out these days: brilliant production quality that transports you into the town and helps to make you empathize with even the more boring characters. Like when I look at the scene of Simon Moran teaching a small child how to play drums I can relate to that; even though it has never happened to me, I feel like I am part of the moment. The music sets the tone for scenes perfectly, even if the writing confuses my mood, at least the music reminds of what mood the creators think I should be feeling right now. Like if I am taken from an important family scene to a creepy-kid scene, the music changes from soft to mysterious. The music seems to be a product of the scenes while carrying the scenes, and I love it. There is nothing better than a symbiotic camera-to-music moment.

The one thing that screams inconsistency, even more than the story, is the acting. The one child actor whose story arc I hate ends up being menacing and could give Harvey Stephens (the original Damien from The Omen) a run for his money. The other child star whose story was more appealing ended up dragging down the scenes where she was placed. She was less like a scared, misunderstood child and more like a brat, which works in the scenes where she is supposed to be a brat, but not so much when she is trying to beg for the audience to empathize with her situation. I just expected that if we are being constantly told that this sister is “the better sister”, maybe there could be a scene where we actually see evidence of this claim. Aside from that, the rest of the cast does well enough. Everyone seems to have scenes where they just didn’t feel like showing up to work that day… everyone, that is, except Mary Elizabeth Winstead. She was the other powerhouse in this series, besides the creepy kid. When her daughter goes missing, I am transported into feeling like my child is missing through her acting. When she is depressed/suicidal I feel like someone should be paying more attention to her. I empathize with her character throughout each episode, and it shows me that Mary has some truly incredible talent to share.

If this show is picked up for a second season, then I would only check it out if you have nothing better to do. It makes for a good “downtime” show, or a show to watch when you’re in between better shows.