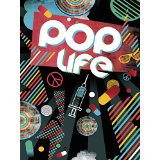 Pop Life is a documentary concerning the role that drugs play in the world of Electronic Dance Music (EDM). Clocking in at about 55 minutes, the documentary really doesn’t take up that much time, and it does have quite a bit of information it sifts through. The documentary is a great introduction to the idea that drugs are, and really always have been, something that closely intertwines with popular music culture (not just EDM).

The most intriguing thing about this documentary is the talking heads it uses. There are a lot of DJ’s, T-pain, concertgoers who use and don’t use, celebrity liaisons, as well as a string of doctors and a former DEA agent. This really brings out a lot of really great information from all sides of the drug use surrounding EDM, but as a result, it begins to lack direction. It is really hard to pin down exactly what the overarching message behind the documentary is, unless it is purely informational. If the only point of the documentary is to provide information about how closely drug and music culture can be intertwined, then it is really nothing new being said. However, the venue of EDM will aid in bringing the rather neutral awareness to a younger audience.

The documentary makes a point to reference Woodstock and the summer of ’69, but insists that there is a difference between the drug cultures then and the ones now. Technically, yes, the drugs are different, and the documentary provides a lot of information regarding what drugs are popular now, primarily highlighting molly. However, that is the only difference I really see. It is very true that the drug culture has evolved from the late sixties until now, but the mentality of the social use of drugs has largely remained the same throughout the decades.

Probably the biggest flaw of the documentary is the fact that it largely misses the mark of what it promotes. It is pitched as covering the relationship of drugs to the EDM culture, but it really doesn’t delve into the music all that much. While it was interesting to learn a little more about the manufacturing of synthetic drugs such as molly, or the declining popularity of ecstasy, I was really expecting to learn a little bit more regarding the combination of drugs and music. Instead I got stories of DJ’s and concertgoers who have taken it and doctors explaining the dangers of using synthetic drugs.

This really is a shame, because I do see a very strong correlation between the evolution of drugs and the evolution of popular music. For argument’s sake, lets start with Woodstock’s rock music and the use of recreational marijuana and end with molly and EDM. The social critic in me sees an interesting shift from analog sound/organic marijuana to digital sound/synthetic drugs. Yes, marijuana is still around, but the documentary argues that molly is the most important drug when it comes to EDM. It is almost as if our social behaviors of recreational drug use are a little more closely intertwined to our social behaviors of creating/consuming music. This topic, I believe, is really worth exploring and would have made a much more engaging film.

For what it is worth, I believe this documentary is most likely targeting the 16-23 year-old age range, which does make it a really informative documentary and keeps it at a length that suits the young adults’ attention span. For me, Pop Life really misses a new and refreshing social critique.

The Jinx: The Life and Deaths of Robert Durst (Blu-ray) The Returned