Posted in: No Huddle by Jeremy Butler on September 29th, 2015 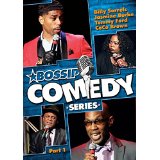 Fair warning, this comedy is much shorter than I was originally led to believe. The cover of this disc gives the deceitful impression that you audience will be treated to at least three performances and one host; however, as it turns out you must read the fine print, as this disc is merely Part 1. I am usually an advocate of the saying leave the people wanting more; however, that saying only applies when you have sufficiently hooked the audience, which this stand-up special fails to do, making the possibility of engaging in Part 2 very unlikely.

The first downfall for this special comes from the format, as the performances of the host as well as the comedian (the host is also a comedian; however, evidence of that remains unseen) are intercut between a recurring skit as well as what appears to be a tutorial in slang. The skit does prove to be entertaining in the first and last incarnation; however, its placement between comedy sets at first make it more of a nuisance than anything else. It would have likely been better received as a preshow or an aftershow addition rather than chopped up and injected throughout the runtime.

Billy Sorrells acts as the host, and as mentioned earlier, he himself is a comedian, though I have yet to receive evidence to support the claim. His style proves energetic; however, his jokes fall flat without every reaching their mark. The special also has another feature (also known as interruption) that lacks a proper name, which for the purpose of this description I will call the comedian introduction. It is another aspect that is interjected in between jokes and features a first-person narrative from the comedian where they talk about how they got started and what comedians influenced them, which in turn brings about a brief montage of jokes from the influencing comedian. This was ill-advised during the Sorrels’ intro, as his prominent influence came from the late great Richard Pryor, and that short thirty-second montage produced more laughs than Sorrels’ entire set.

Next comes CoCo Brown, the special’s only real comedian (sorry Sorrells, but I’ve got to be honest). Again the audience gets the comedian introduction, and she names an influence that I was unfamiliar with before this disc, Moms Mabley. Brown’s name carries a bit more weight in the comedic world as she has made many appearances scattered in several different movies and television series. You may not recognize the name; however, I imagine all it would take is a look at her to provide you with a reference point. Brown’s style is more relatable as she calls upon her own life experience and attempts to bring laughter out of normally unfunny situations. Her main topic of discussion is her recent divorce; though this is far from uncharted territory, Brown’s approach to the subject matter produces funny results. She remains approachable throughout her set dispite interruptions.

The initial shock of having what felt like half a comedy special had long-lasting effects on my opinion of this disc. I will accept partial blame for not reading the fine print; however, I will not take the whole enchilada, seeing as the cover art features comedians that I can only assume will appear in the next installment, which presents the question of why put them on the cover art of this one when another one is due out at a later date. In conclusion, CoCo Brown does her best, but even her talents aren’t enough to keep my interest with this special, thereby making my interest in the next addition highly unlikely.

Jeremy Butler is a film school graduate of the International Academy of Design and Technology. He is been writing for Upcomingdiscs since 2012; however, movies have played a big part of his life for much longer. Favorite genres include horror, science fiction/fantasy, and comedy. Favorite movies are V for Vendetta, Boondocks Saints, Kiss Kiss Bang Bang, and The Godfather.
The Last Man on Earth: The Complete First Season The Flash: Season 1 (Blu-ray)