The Last Man on Earth: The Complete First Season 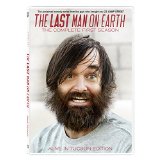 “I just realized that having other people around is what makes life worth living.”

This lesson doesn’t come easily — or quickly — for Phil Miller, the Last Man on Earth. On the other hand, having other people around doesn’t do a heck of a lot for The Last Man on Earth, the dementedly inventive Fox comedy that becomes considerably less interesting the more people start to show up. That being said there’s plenty to like and admire here, starting with the show’s comedic, refreshingly non-bleak look at post-apocalyptic life.

This might be one of the shortest synopsis I’ll ever write, since The Last Man on Earth isn’t too concerned with life before the virus that wiped out (almost) all of humanity. Phil Miller (creator/star Will Forte) is the only survivor, a fact seemingly confirmed by his driving an RV all over North America searching for other people. He eventually returns to his hometown after leaving an “Alive in Tucson” message on a billboard for other potential survivors. While Phil initially loves having the entire planet — or at least Tucson — to himself, it’s not long before a mind-warping loneliness starts to set in. But just as Phil is about to reach his breaking point, he encounters a kooky survivor named Carol (Kristen Schaal).

It’s only a minor spoiler to say that other people eventually join Phil and Carol, including two characters that invalidate the show’s title. That being said, this is still a pleasingly self-contained comedy that, despite its out-there premise and askew comedic sensibility, has a surprising amount in common with more traditional sitcoms. For one, the interactions of the cast — which still hovers around a handful of performers — reminds me of multi-cam comedies (everything from Golden Girls to Everybody Loves Raymond) that mostly kept the action confined to a tight-knit group of characters.

The Last Man on Earth is based on a concept from in-demand feature filmmakers Phil Lord and Chris Miller that Forte ran with. (Probably not a coincidence that the main character’s name is “Phil Miller.”) Lord and Miller directed the first two episodes in the series, “Alive in Tucson” and “The Elephant in the Room.” The duo is behind the successful Jump Street movies, but their greatest contribution to this show is the boundless visual ingenuity they brought to the Cloudy with a Chance of Meatballs flicks and The Lego Movie. (They’re also taking their talents to a galaxy far, far away.)

Early on, it seems like anything can happen on Last Man on Earth. Phil’s travels throughout North America results in some interesting home décor choices. (He’s got a Monet, a Heisman Trophy, and at least one keepsake from the White House.) “Alive in Tucson” also has some fantastic sight gags, including a game of parking lot bowling that becomes increasingly more insane. The pilot — which is a brilliant solo showcase for Forte — directly references Cast Away, and makes it seem like Phil’s sole companions would be the various sports balls he draws faces on at the local bar. While a one-man show might work in smaller, movie-sized chunks, it’s simply not sustainable for a TV series that aspires to be on the air for multiple years.

Unfortunately, The Last Man on Earth becomes disappointingly ordinary once other people appear on screen. I don’t blame the actors. Schaal — with her wide, crazy eyes and grating voice — is a polarizing presence for sure, but I think she makes a solid foil for Forte’s slacker stylings. (Carol’s a stickler in every way, which drives the doofus-y Phil up a wall.) I won’t reveal much about their roles, but we eventually see appearances by January Jones, Mel Rodriguez, Mary Steenburgen, Cleopatra Coleman, and Boris Kodjoe on Phil’s neighborhood. Out of those, I was most impressed by Rodriguez’s guileless, infuriating good nature as a rival of Phil’s.

Each of these actors, led by Forte’s unwavering commitment to man-childhood, is quite good on the show. My disappointment stems from the fact that a show with infinite story possibilities…mostly becomes about Phil’s quest to get laid. (This is seriously the plot and main thrust of the majority of the episodes.) It’s also somewhat frustrating that The Last Man on Earth winds up gluing itself to the same gated community, even though I understand this is just the nature of television production. To be fair, the season finale/“Screw the Moon” addresses the latter problem by strongly suggesting that a change of scenery is in order for season 2. (The finale also leaves Earth for a quick cameo by one of Forte’s former Saturday Night Live buddies.)

The Last Man on Earth: The Complete First Season features all 13 episodes on two discs. This DVD set also includes a relatively impressive collection of bonus material, including commentaries (Ep. 2/“The Elephant in the Room” and “Screw the Moon”), deleted scenes (a couple of which give us a glimpse at life before the virus), a Q&A panel, a gag reel, and the “Survival of the Funniest” featurette. Season 2 premiered last night. I haven’t watched it yet, but I intend to see where the show goes with its new batch of episodes because Last Man on Earth‘s greatest strength is that it can believably go anywhere.