Posted in: No Huddle by Archive Authors on September 29th, 2015 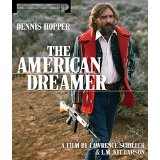 Dennis Hopper was probably a friend of James Dean, since he appeared in two of Dean’s three films, Giant and Rebel Without a Cause. It’s hard to tell about Hopper, because he went through so many changes over the years. In the fifties and early sixties, he was clean-cut and quiet. After Dean’s death he started to acquire a rebellious streak, famously confronting director Henry Hathaway on the interpretation of a scene requiring 80 takes. It nearly destroyed Hopper’s career early on, but John Wayne got Hopper on two other Hathaway westerns, and fences were mended in the Old West. Around the time one of those westerns (True Grit) came out, another film came out starring Hopper. It was Easy Rider, which Hopper also directed and co-wrote. Easy Rider basically changed all the rules in Hollywood due to its enormous success. It is in the wake of Easy Rider‘s success that The American Dreamer was made.

Hopper was an accomplished photographer in the sixties, having been published in Vogue and other magazines as well as doing extensive portrait work of people like Martin Luther King, Jane Fonda, Tina Turner, and Andy Warhol. Hopper was also an accomplished painter and a very successful art collector. All of this figures into the portrait of the man that comes out in The American Dreamer. Hopper was clearly being pulled in many directions by his impulses, including increasing abuse of drugs and alcohol. He was nothing if not multidimensional and was probably frequently lost in one of those other dimensions.

The American Dreamer is described as a faux-documentary by the team of L.M. Kit Carson (The Texas Chainsaw Massacre Part 2, Paris, Texas) and Lawrence Schiller, who created it with Hopper’s participation. It wasn’t much more than an excuse to participate in some extended play including orgy fun with groupies and playmates. At one point Hopper, looking and acting very much like Charles Manson, presides over a group grope (and admits to visiting Manson in jail). He also exercises numerous opportunities to shoot off various rifles and handguns. We also find him running around naked through the streets of L.A. and Taos, New Mexico where he purchased an elaborate desert compound so he could edit his follow-up movie to Easy Rider, The Last Movie.

The American Dreamer is definitely something for the time capsule, cementing an insane period where the death of the Vietnam war mixed with free love and a brand new world of recreational drugs. The newly-restored DVD comes with two making-of features which definitely help clear up a few things. Hopper is endlessly rambling dubious philosophy, much like the character he played later in Apocalypse Now.

The Last Movie was very much an experimental non-linear film that mystified audiences and became a huge commercial bomb (though widely regarded as way ahead of its time and a film like no other).

One thing is sure that Hopper was one of the most stoned mainstream stars of all time. He eventually sobered up in the eighties and became an entirely different kind of actor and person. The American Dreamer is a document of a time period when someone could let it all hang out and dredge up all the murk that lay within. Hopper was that kind of performer all his life. He played every kind of villain and fool over the years with an almost unsettling authenticity. He was definitely on a journey through undiscovered territory his entire life. Like most people who go to undiscovered country, he frequently got lost.