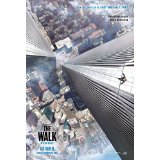 I don’t know about you, but whenever the Twin Towers pop up in any movie made or set before 2001 — usually it’s a quick cameo during an establishing shot of NYC’s iconic skyline — I feel a pleasing flash of recognition…immediately followed by a queasy bit of dismay. The best thing about The Walk — arguably even better than the extended high-wire spectacle that gives the movie its title — is that the World Trade Center is lovingly granted a starring role alongside Joseph Gordon-Levitt. Unfortunately, director Robert Zemeckis’ film visibly wobbles on the way there and makes a truly extraordinary real-life story feel like a little too familiar.

“If it works, it will be the artistic coup of the century.”

Levitt stars as Philippe Petit, the passionate French high-wire artist who sought to (illegally) walk between the Twin Towers in 1974 just before they were completed and open to the public. Before the main event, however, The Walk flashes back to show us Petit’s wire walking apprenticeship under the crusty Papa Rudy (Ben Kingsley). We also see him encounter (and recruit) the rag-tag Franco/American crew that will eventually help him attempt his impossible feat.

When I complain that the story — chronicled in Petit’s book, “To Reach the Clouds” — feels overly familiar, it’s not just because it was already adapted into the terrific, Oscar-winning documentary Man on Wire. The doc’s director, James Marsh, used a thrilling mix of still photographs, talking head recollections, and dramatic re-enactments to craft what was essentially a heist flick.

With a reliable assist from Alan Silvestri’s jaunty, jazzy score, Zemeckis absolutely taps into the zippiness of the heist genre. (Instead of pulling off a “job,” Petit is maniacally obsessed with executing “the coup.”) The problem is the film comes up disappointingly short in crafting a compelling profile of Petit. The character vacillates between wide-eyed wonder at the prospect of walking across the Twin Towers and behaving like the sort of arrogant, difficult genius we’ve seen 100 times in a 100 different biopics. Despite its title — which implicitly promises a laser focus on Petit’s most audacious endeavor — The Walk half-heartedly breezes through tired biopic trappings (a childhood flashback, the meet-cute with “the girl” who becomes his support system) before it gets to the really good stuff.

“There is no show without an audience.”

But Zemeckis’ gravest misstep — the director co-wrote the script with Christopher Browne — is a device that has Petit directly addressing the audience as he stands on the torch of a different NYC icon, the Statue of Liberty. This is a painful, unnecessary device for a variety of reasons, including the fact that it repeatedly interrupts the main action. It also requires us to listen to Gordon-Levitt’s faux-French accent more than we really need to.

I can’t totally say Gordon-Levitt is miscast because he’s got the taut, springy physicality the role requires. But the French accent isn’t the only distracting part of his performance. The actor wears blue contact lenses to play Petit, and I imagine facial replacement technology was used for some of the more complicated wire walking sequences performed by a double. Those factors combine to give his face a detached, somewhat off-putting quality.

The supporting cast isn’t quite fleshed out enough to make the caper sequences totally pop. Kingsley is amusing, but ultimately hits the same “cranky mentor” notes we’ve seen before, and Gordon-Levitt has more physical chemistry with the South Tower of the WTC than he does with Charlotte Le Bon as Annie Allix. The duo has a promising start, but Le Bon is essentially relegated to peering up at Petit through a pair of binoculars for the movie’s final 45 minutes. The exceptions are James Badge Dale as Jean-Phillippe “JP”, a wily, shifty Frenchman living in NYC, and Cesar Domboy as Jean-Francois, who is petrified of heights. (Take a wild guess as to whether or not that becomes an issue during the coup.)

Zemeckis does add a few bits of whimsy that hit the mark, including switching to a French New Wave-ish B&W palette for a portion of Petit’s performing days in Paris. The director (Back to the Future, Who Framed Roger Rabbit, his extended forays into motion capture in The Polar Express, Beowulf, and A Christmas Carol) has always been a technical innovator, even in films (Forrest Gump, Contact, the terrifying plane crashes of Cast Away and Flight) that aren’t totally known for being visual spectacles. Well, let’s make one thing absolutely clear: The Walk is a visual spectacle.

Some of the whimsical touches do give the movie a slightly artificial, storybook look that doesn’t always feel totally appropriate for this fact-based tale. However, the serene moment where Petit has one foot on the wire and the other on the north end of the South Tower is nothing less than sublime. The ensuing Walk — and the way cinematographer Dariusz Wolski’s camera glides over and along with Petit — is utterly intoxicating, even if the effect loses some of its emotional impact after a while. (The real Petit was reportedly on the wire for close to an hour.) The Walk concludes with a touching tribute to the Twin Towers, which is more effective than the film’s overt suggestion that Petit’s stunt was responsible for giving them life. (We’re told that many New Yorkers found them appalling and likened them to a pair of massive filing cabinets.)

The film premieres today exclusively on IMAX 3D screens before opening wide on Oct. 9. You get a couple of notable “objects flying at you” effects. (Including one that admittedly made me flinch.) But the real standout is the climactic Walk, in which Zemeckis pulls off the most impressive — and dizzying — use of depth I’ve seen in a long time. I definitely wish Zemeckis had applied more of that depth to other parts of the story, but Petit’s Walk is still worth witnessing on the largest screen you can find…even if it takes a while to get there.