Posted in: No Huddle by Gino Sassani on October 5th, 2015 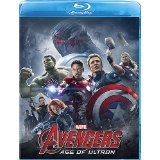 Remember when you were a kid and one of your friends would come over and ask if you could come out and play? You would head for the door with a grin from ear to ear, because you knew you were about to have a blast. You might not have had any idea what it was you were going to do. Often you made it up as you went along. It didn’t matter. You just knew fun times were on the other side of your front door. That’s exactly how I felt going to catch The Avengers: Age Of Ultron. It was as if Joss Whedon had come to my house and asked me to come out and play. And it wasn’t just Joss. He brought a whole bunch of his cool friends, and they brought a ton of really cool toys. From that point it didn’t matter so much to me what was going to happen exactly. Phasers were set to good times, and I knew I was going to have fun. Age Of Ultron did it to me just like the many Marvel films before it. I didn’t want it to end. I often joke that the only thing wrong with instant gratification is that it takes too long. Now I have to wait another year before most of these characters will assemble once again in Captain America: Civil War.

The film opens with the action already flying. This time there’s no time spent “getting the band back together”. The Avengers are in a snowy forest where they are attacking a Hydra base. It is here that they first encounter two new enhanced humans (it is verboten to use the term mutant because of Marvel’s deal with Fox). Wanda (Olsen) and Pietro  (Taylor-Johnson) Maximoff are working for Hydra because they blame Tony Stark (Downey, Jr.) for the death of their parents and the destruction of their village. Pietro has super speed and is known in the comics world as Quicksilver. Wanda has crazy psychic and telekinetic powers and is known as The Scarlet Witch. She gets into Tony’s head and brings him a horrible vision of a tragic future.

It is this tragic future that pushes Stark into making a huge mistake. He decides to build a super-intelligence that can control a robot army to protect the world from the scary bad guys he knows are out there. Of course, said collaboration with Bruce Banner (Ruffalo) leads to the creation of the titular Ultron, voiced by a menacingly wicked James Spader. None of this goes down too well when the experiment gone wild surprises the rest of the Avengers, who were kept in the dark. The result is tremendous inner conflict at just the moment they will need to work together to defeat this new threat. For, you see, protecting the world means removing its biggest threat (just ask Al Gore) … humans.

Age Of Ultron goes where the first film only scratched the surface. The huge upside here is how much character development Whedon manages to sneak in between all of the explosive action. It’s a balance that really gets to the heart of why this film will do as well as it will. Everybody knows that Whedon is a master of the big ensemble cast. Buffy The Vampire Slayer was one of the pioneers of ensemble genre television. That’s no surprise. What amazes me is how much about these characters there was still left to mine after so many films. The script reaches deep into the insides of each Avenger and reveals their deepest secrets, and most importantly, their deepest fears. He delivers fresh insights into each and every character. It’s no wonder these actors are so willing to reprise these characters when they have so much human drama to play with without skipping a beat on the comic splash-page expectations of the most feverish fans. All of this only strengthens the chemistry this group has. Each and every one of these guys has proven he can take the lead and carry a film. And each and every one of them finds just the right niche in this group dynamic to make it so much more exciting than the comics ever were… with all due apologies to Stan Lee and company.

Chris Evans’s Captain America has grown as the leader and moral center of the group. He wears his morality on his sleeve, as evidenced by a crowd pleasing admonition of “language” in the midst of battle. Yet he’s no longer the naive soldier blindly forging into the breach. His idealism is now tempered with realism. His relationship with Tony Stark is already foreshadowing the conflict that will put them on opposite sides in next year’s film. Robert Downey Jr. for his part reveals a Tony who is less carefree and snarky. He’s still arrogant, a flaw necessary for the birth of the film’s threat. But he’s a man burdened with knowing too much. You get the sense he’d kill to be able to return to the ignorant playboy he once was.

It’s no secret that Scarlett Johansson was pregnant during much of the shoot, but you’d never guess. She’s right there in the thick of the action. Thanks to Wanda we finally get a look at what created The Black Widow and the sacrifices she made for what she’s become. I can’t say I’m in love with the romance blossoming here with Mark Ruffalo’s Bruce Banner/Hulk. Still, the dynamic only strengthens the film, and the “lullaby” she’s developed to bring Banner out of The Hulk is a pretty important plot device here. It was a clever way of allowing The Hulk to be a contributing member of the team both as a scientist and fighting force when called upon.

Largely ripped off in the first Avengers film, Jeremy Renner gets the biggest back-story material in the movie. Without giving away a nice twist in the plot, I can tell you that you’ll see a side of Hawkeye that even his fellow Avengers never saw coming. While Thor gets the least character development here, I suspect that Chris Hemsworth is mostly setting us up for the events in the forthcoming Thor film.

In the comics there was never really a set group of Avengers. They changed from time to time as new heroes joined and staple characters moved on only to return again later. The Age Of Ultron begins that first metamorphosis for the team. Wanda will be the significant addition, if future films hold true to any of the comic traditions. This version of Quicksilver is nothing like the cocky version we saw in the last X-Men movie. This is a more serious version with far more serious implications. Paul Bettany finally gives form to his long-standing role as the voice of Jarvis. In a wonderfully natural extension of that entity he becomes The Vision. He arrives too late to have as much impact as the others, and I think the weakest part of the entire film has to be his moment of “birth”. But I do see great potential for the actor and character going forward. Audience members were largely confused, I discovered afterward, about exactly who or what he was. Perhaps the extended version coming later will solve some of that issue. None of this falls on Bettany at all, nor the design of the character. He looks fantastic, and the performance is spot-on. Don Cheadle gets to go full-on War Machine.

All the while Whedon is weaving his surprisingly intimate tale, he does so without any loss on the action front. Expect the huge battle scenes and catastrophic carnage. One of the new toys is the team’s famous Quinjet. This is how the team gets from place to place in the comics and now in the MCU films. There are plenty of other neat toys and gadgets to make this worthy of the Marvel brand. Stan Lee gets another wonderful cameo. At 92 one has to wonder just how many more of these he has in him. Well, he’s still going strong, and I wouldn’t be surprised if he was a part of this ride for another decade (maybe longer).

The film is darker in tone, to be sure. Our heroes are taken to their worst fears, and there is tremendous loss. Still, look for much of the trademark Marvel humor that set their comic world apart from that of DC. And, of course, there are so many allusions to future Marvel projects. Wakanda is mentioned as Vibranium plays a huge part in the film. Of course, that’s all heading to the Black Panther film. Andy Serkis plays arms dealer Ulysses Klau. It’s a small but vital part that absolutely is leading us somewhere down the road.

The Blu-ray release contains three short behind-the-scenes features, deleted scenes, a gag reel, and a commentary by Whedon. I know there is a ton of deleted stuff that wasn’t included here.

There is one mid-credit stinger. The reported Spider-Man stinger is a hoax. The end-credits are actually pretty cool, using a statue tableau to portray the characters in heroic Greek poses. No, I didn’t want the ride to end. But it isn’t even remotely close to ending. Marvel has an ambitious slate ahead of it, while DC attempts to play catch-up, perhaps too ambitiously next year. “That’s not going away any time soon.”

Gino Sassani is a member of the Southeastern Film Critic's Association (SEFCA). He is a film and television critic based in Tampa, Florida. He's also the Senior Editor here at Upcomingdiscs. Gino started reviewing films in the early 1990's as a segment of his local television show Focus. He's an award-winning recording artist for Omega Records. Gino is currently working on his 8th album Merchants & Mercenaries. Gino took over Upcomingdiscs Dec 1, 2008. He works out of a home theater he calls The Reel World. Favorite films: The Godfather, The Godfather Part II, The Body Snatcher (Val Lewton film with Karloff and Lugosi, not the pod people film), Unforgiven, Gladiator, The Lion King, Jaws, Son Of Frankenstein, The Good, The Bad And The Ugly, and Monsters, Inc.
“31 Nights Of Terror” iZombie: Season 1 “31 Nights of Terror” A Plague So Pleasant