Posted in: No Huddle by Jeremy Butler on October 9th, 2015 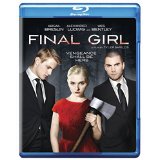 “What an interesting girl.”

Four against one, hardly fair odds. Then again, that is how this group prefers it. Little do they know that their latest prey is much more than she appears. Abigail Breslin is every predator’s nightmare in this action thriller about a group of boys who like to lure unwitting girls into the woods to hunt for sport. This film had style, a bit of noir, making it difficult to the determine the time period it is meant to be portraying, but all the same, this was one of my favorites of movies I’ve reviewed this year.

After losing her parents at an early age, Veronica (Abigail Breslin) meets William (Wes Bentley), a mysterious stranger who offers to take her in and train her for a job “that most people wouldn’t be able to handle.”  Over the next several years, William trains and conditions Veronica to be able to fight and kill without hesitation. Meanwhile, as she completes her training, a group of friends (Alexander Ludwig, Cameron Bright, Reece Thompson, Logan Huffman) ritually and sadistically lure blonde women into the woods to hunt for sport. Unbeknownst at the time to a blonde Veronica, these boys are to be her final test. She is to act as bait, drawing the boys in so they are compelled to make her their next victim.

Successful in her mission, Veronica quickly finds herself unarmed and outnumbered. Her attackers are salivating at the idea of bringing down their latest conquest, unknowing that she will not be so easily killed.  Veronica must rely on her years of training and expertise to turn the tables on the predators.

As I said earlier, this film definitely had style to it. I may have been unsure of the time period, but everything fit together nicely. The set lighting drew me in, especially when it was framing Breslin, making her appear very delicate and innocent, thereby aiding in the underestimating of her character for the antagonist as well as the audience.

Breslin is a cool customer, easily convincing as the innocent victim and methodical killer. Early on she shows vulnerability, especially in regards to her dynamic with mentor Wes Bentley. These interactions and chemistry between the two is what drives much of the film, as even when he is not on screen there are multiple voice-overs of his teachings. Breslin’s soft-spoken approach to the role is one of the highest selling points for the film, especially during the film’s climax. She is also afraid to get bloody or dirty as much of the film takes place in the woods and she is in a dress. Granted, I’m sure much of the action sequence that took place was likely done by stunt doubles; however, if you were to tell me that she did most of her own stunts, I would believe it no question. She shows great commitment to the role in all aspects of the performance, clearly showing why she is regarded as one of Hollywood’s great young talents.

There are a few other performances that deserve recognition as well. Wes Bentley’s role as the reserved mentor is a bit typecast, but I feel comfortable saying there are few who do it better than he. His chemistry with Breslin is worth mentioning again, because it had intensity to it. Both of them possess those piercing eyes that hold your gaze and can put shivers down your spine. If it is like that for normal people, I wonder what it was like for them having to look into one another’s eyes. Their dynamic is another selling point, specifically after the revelation of Veronica’s innermost fear, and she poses a question to her mentor that many will many will likely feel in the pit of their stomach. The final performance worth mention would be Ludwig as the primary antagonist. Equally charming and menacing at the same time, he acts as the wrangler for the group as well as the man responsible for supplying the victims. Ludwig displays a character that acts with no remorse for his actions except when describing a past hunting experience that can act as his character’s motivation. He and Breslin also engage in pre-kill and post-kill banter that I found highly enjoyable.

Despite its great execution, the story did leave me with an unanswered question such as the purpose as to why Veronica was recruited. Given her age at the time of her recruitment, I can only conclude that there is larger objective than what was presented here. Given this question, I can only conclude that writer left the story open for sequels (although doubtful). Though I’m usually not fond of sequels given a strong faith that the original is always better, I would be open to seeing this story continue given the right storyline. I recommend others give this a watch, and see if they share my opinion.

Jeremy Butler is a film school graduate of the International Academy of Design and Technology. He is been writing for Upcomingdiscs since 2012; however, movies have played a big part of his life for much longer. Favorite genres include horror, science fiction/fantasy, and comedy. Favorite movies are V for Vendetta, Boondocks Saints, Kiss Kiss Bang Bang, and The Godfather.
“31 Nights of Terror” Poltergeist (2015) (Blu-ray) Exclusive Interview With Bill Allen From Rad and Heroes Of The Dirt