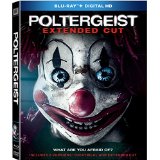 That instantly-iconic horror movie line — delivered in a cheery, chilling, sing-songy voice by the late Heather O’Rourke — signaled the arrival of malevolent spirits in 1982’s Poltergeist. In 2015, “they’re hee-eere” could just as easily refer to the latest glut of horror remakes. (Thankfully, there’s still at least one *sacred* cow.) That list now includes a new version of Poltergeist, which features some solid thrills and (for better and for worse) sticks pretty closely to the original.

In a sly nod to the most lasting image from Tobe Hooper and Steven Spielberg’s 1982 film, the new Poltergeist opens with a close-up of a screen. But instead of a boxy tube television, the screen in question here is a tablet being held by one of three children en route to their spiffy new suburban home. The Bowen family is led by recently laid-off patriarch Eric (Sam Rockwell) and chipper wife Amy (Rosemary DeWitt). Their three children are surly teen Kendra (Saxon Sharbino), fraidy cat middle son Griffin (Kyle Catlett), and curious moppet Madison (Kennedi Clements).

Even before we learn the Bowens’ new home was constructed on top of a cemetery — Eric and Amy were told the remains of the dead were transported somewhere else beforehand — the family begins experiencing some strange occurrences. (Like Madison seemingly talking to thin-air in the vicinity of her bedroom closet.) After the supernatural attacks intensify and Madison goes missing, the Bowens enlist help from a team of paranormal researchers, as well as occult specialist-turned-reality star Carrigan Burke (Jared Harris).

This new version is produced by, among others, Sam Raimi’s Ghost House Pictures, which most recently gave us the deliriously grisly remake of Raimi’s own Evil Dead. The PG-13 Poltergeist redux doesn’t come close to going there, favoring more familiar haunted house scares, including a pumped up callback to the original’s creepy clown scene. (Featuring 1,000% more clowns!) The director is Gil Kenan, who is best known for making Monster House. That animated film was about a scary, sentient structure, which kinda makes him the ideal guy to stage the scenes where the Bowens are being attacked by forces inside their home.

I actually wish Kenan — working from a script by David Lindsay-Abaire — had been given a bit more free reign to get crazy with this film. The story beats and set pieces will be familiar to anyone who saw (and was terrified) by the original. I actually found the slight, storyline-related advances in technology to be a little more effective than the behind-the-scenes stuff that went into the making of the film. In addition to that boxy TV, the spirits here haunt the Bowens tablets and cell phones (much to the chagrin of cranky Kendra). And the paranormal cavalry wind up using GPS and drone technology to help retrieve Madison in the final act, which shows us more of the supernatural realm than the previous movie. These aren’t earth-shattering additions by any means, but they serve as smart little updates.

The bigger problem is that, simply put, this movie isn’t particularly terrifying. There are some smartly-staged sequences and a few impactful startles (like the tree that threatens to bang into the house’s attic), but the remake doesn’t come close to achieving the spine-tingling mood of the original. The newer, fancier FX filmmakers have at their disposal should open up a world of possibilities. But there’s nothing here that’s even as haunting or disturbing as the original’s face-melting scene  (I love that they snuck away with a PG rating), although the remake features a somewhat pale imitation with Rockwell’s Eric.

So what’s actually good about this newer version? Well Rockwell is always a good place to start when searching for a film’s merits; his laid-back, sarcastic energy is a refreshing antidote to some of the movie’s inherent nonsense. (Rockwell is less interesting when he has to go into more conventional Concerned Dad mode.) He still has more to do than DeWitt, although it was refreshing to have her mother character be just as skeptical of the haunting as the Typically Clueless Husband. The real surprises, however, were the kids. I was particularly impressed with Catlett’s relatably terrified demeanor before Griffin gains some resolve. Meanwhile, Clements goes for more straight-up adorableness without tapping into the eeriness O’Rourke was able to channel. Harris brings some spark late in the game, but he’s nowhere near as entertainingly arch as Zelda Rubinstein’s psychic.

That sense of play is the crucial missing ingredient in this new Poltergeist, which is a diverting, thoroughly competent, and almost entirely unnecessary addition to the swelling horror remake canon.

Poltergeist is presented in an aspect ratio of 2.40:1. The 1080p image is arrived at with an AVC MPEG-4 codec at an average of 31 mbps. I was actually struck by how sunny and vibrant a good chunk of this visual presentation was. (Not my expectation going into Poltergeist or any horror movie.) The early scenes that establish the Bowens’ idyllic, cookie-cutter suburban life are resplendently blemish-free, which naturally helps set up the horror to come. Black levels are tremendously inky and offer strong separation, which is critical for the darkened jump scare sequences and the film’s paranormal final act. Colors and texture are also impressively rich and can especially be seen during any close-up of that pesky clown. This is another strong home video release from Fox that enhances the story on screen.

The DTS-HD Master Audio 7.1 track is, arguably, even more impressive than the sterling visual presentation. From the outset, this is a track that is as alive and disruptive as the spirits in the Bowen house. Subs (from jump scares and a particularly nasty thunderstorm) rattle the room when it’s called for while atmospheric sound effects populate the rear channels in thoughtful, dynamic ways. Fidelity is spot-on, and there is also a fair bit of activity and directionality across all channels; when there’s a ruckus on a far-flung side of the house, you will hear it from the appropriate speaker. Most importantly, the extra two channels here serve an important, immersive purpose rather than being overkill.

All of the bonus material is presented in HD. There is a 101-minute Extended Cut of the film that is about seven minutes longer than the Theatrical Version and can be accessed using the Set-Up option on the menu screen.

Alternate Ending: (1:46) I’ll keep this as spoiler free as I can, but this alternate conclusion gives us a variation on Carrigan’s fate. It also dovetails with the movie’s opening shot by ending on a screen. To be honest, neither ending is appreciably better than the other, though this one is darker and less comic than the theatrical conclusion.

I realize there are people — especially fans who were properly spooked by the original at a young age — who will hate this movie on principle. Then again, there’s another segment of the horror crowd who will trash this movie because…it’s not especially frightening. (This latter point, of course, is more a matter of personal taste.)

Maybe it’s because I (admittedly) went in with pretty low expectations, but I thought this was a well-made and well-acted homage to the original story, if not the original’s spirit.