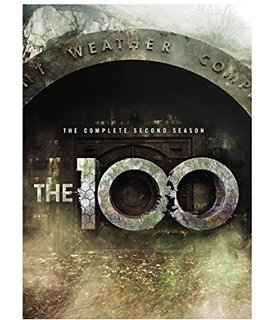 You should know the setup by now. Here’s a quick rundown: it’s 97 years ago, and nuclear holocaust has made life on Earth unlivable… at least that’s what most people believed. Fortunately for humanity, several countries had space stations in orbit. These various stations eventually came together to pool resources hoping for a better chance at survival. The ragtag collection eventually became the ARC. Now, nearly a century later they have created a civilization ruled by the dire necessity of their situation.

All crimes committed after the age of 18, no matter how small, are punishable by death. It’s called being floated. Basically that means you’re sucked out of an airlock. It’s intended not only to keep order, but as a way to keep the population from over-taxing the aging ARC and its resources. Except it’s not working. Air and food have fallen to unsustainable levels. So the ARC’s council comes up with a desperate plan. There are 100 juveniles being held prisoner for crimes committed before their 18th birthday. The ARC is sending them down to Earth to ascertain if the planet has recovered enough to support life once again.

Among the 100 from which the series gets its name is Clarke Griffin (Taylor). She is the daughter of ARC medical chief and council member Abby Griffin (Turco). Her father had been floated for trying to let the population in on the whole failing-systems thing. Yes, he was Jor El, and interestingly enough his daughter who was sent to Earth from space is named Clark (except with an extra e).

The ARC also includes stowaway Bellamy Blake (Morley), who just tried to kill Jaha and escaped on the drop-ship to protect his sister Octavia (Avgeropoulos). He ends up contending with Clarke for leadership of the 100. He’s an inspirational guy who preaches a no-rules “do whatever the hell you want” while all the while ruling with an iron hand and inflicting rules intended to cut the group from the ARC. To avoid punishment for his crime, he needs the ARC to believe the 100 died so they will assume Earth isn’t ready and not follow them down. Except the Earth is ready…well, sort of.

On the ground they have encountered some serious dangers. The 100 soon become the under-50. There are the grounders. They are a group of tribal survivors who have a warrior society led by Commander Lexa (Debnam-Carey). Octavia has been falling for a grounder named Lincoln (Whittle). By this second season she has learned to respect the culture and is more Grounder than Sky People, the name Grounders have for the 100.

As the second season begins, a battle has been fought with serious casualties on both sides. The Grounders have lost 300 warriors. The surviving 100 are down to 48 as described in the season premiere title. They have been “guests” of another group of survivors living underground at a place called Mount Weather. They have continued the tradition of the long-gone America complete with President Dante Wallace, played by veteran actor Raymond J. Barry. It appears to be a paradise. Plenty of food and friendly people who shower the 48 with attention. Of course, Clarke believes it’s all too good to be true, and it is. They can’t survive on the surface. They’ve lost the ability to handle the ground’s radiation. But the 48 represent a chance to retake the surface. They’re going to help whether they want to or not.

The big news, of course, is the arrival of the rest of the ARC on the ground. The adults are back, and they’re not prepared for what awaits them. They discover the “children” have become hardened, and they all have become more brutal after fighting so long just to survive. Clarke has become the leader, and she pushes that leadership even onto the adults. She makes choices that will ultimately free the mountain captives, but at a great cost to her own conscience. And that’s really the theme of the second season.

We’ve gone away from Lord of the Flies and its do-whatever-you-want slogan. There is organization and unwritten rules now, but there’s a certain savagery that is the necessary outcome for the things they’ve seen and done.

The series is almost entirely driven by conflict. The ARC survivors fight among themselves as well as with the Grounders and Mount Weather camp. The ARC people spend more time on bickering than solving the issues they face. Conflict can be found on micro and macro levels here. It’s all around this series, and without it there’d be nothing to see here. The writing spends a lot of time rehashing stale arguments that end up doing more to fill space than actually drive the plot forward. The stories get stale and repetitive rather quickly. Just about each episode has some group searching for another. When that group returns, they go out and search for the group that was looking for them. The result is a lot of boring talk in the woods and careless encounters with Grounders and Reapers. It got old pretty fast, and I was just about to give up hope when the second half of the season kicked in.

The show gets far more interesting as an alliance with the Grounders is forged at great costs. You see, the Mountain has been turning the Grounders into Reapers. So there’s a common enemy. There is drama now as the sides attempt to come together while inside, Bellamy is trying to free the army inside the mountain. He also needs to turn off the acid fog. Here the interactions and the peculiarities of the various factions start to provide very compelling stories. By the two-part finale you will be on the edge of your seat. If this show can keep that momentum going, there’s a chance this thing has finally hit its stride, and I’m excited, for the first time, to see where it goes from here.

Last season I talked about Isaiah Washington’s lack of passion and purpose. I think someone in the writing room was paying attention. Washington finds a way to make it to the ground, but not to resume his role as leader of the ARC people. He leads a small group including last year’s villain John Murphy (Harmon) to a promised City of Lights. Their journey is a very small diversion to the action of the main show, but it leads to an interesting conclusion that will be played up far more in season three.

Alycia Debnam-Carey is a very welcome addition to the cast this season. As leader of the Grounders, she gives one heck of a solid performance. Her scenes with Taylor’s Clarke have taken that character to a new level. There’s wonderful chemistry here that wasn’t even utilized to its fullest. I’m not sure the Lexa character returns next season. I, for one, will be disappointed if there isn’t more to this relationship. There’s a powerful dynamic here in which the future of the show can be built.

A serious problem finds the show bowing to the typical lowest common denominator in the audience. OK, here’s the situation. Your people are dying both on the ground and in space. There are people in camp missing. Primitive warrior guys are on their way to wipe you out. Disease and famine are taking their toll. You need to build and replenish weapons. What do you do? Of course, you take time out to get naked and roll in the sack for a while. Running from the bad guys? There’s plenty of time to stop and stare deeply into each other’s eyes. Arrows are flying around your head? It’s the perfect moment to stop and talk about your feelings. Thanks, writers, for keeping it real…and sexy, I guess.

I must give a tip of the hat to the production design folks on the show. The series looks very good. The Vancouver locations are used to excellent form, and the newborn Earth is quite believable. The f/x work is also top-notch. The ARC design itself is a rather nice one, albeit in pieces on the ground. It is complicated, yet simple enough to all make sense. It’s functional. The interiors honestly sell the idea of high technology that’s good stuff but well past its expiration date. Everything from fabrics, textures, and surroundings tells a very detailed story. The production folks are telling a far better story than anyone on the writer’s staff appears to know how to do. If you’re going to get hooked on this show, it’s that wonderful design that’s going to suck you in.

The show is based on a new series of books from writer Kass Morgan. The crew here has a little bit more room to operate than do most shows based on book series. The first book had not yet been released when they started filming the series. Series creator Jason Rothenberg had the fortune to preview the book’s outline and first few chapters. It dovetailed in with an idea of his own which was quite similar but dealt with the survivors exploring an alien planet for sustainability. I think this is the better idea and certainly has great potential. Now it’s all about the planet. Space is no longer a part of the landscape. The characters have no choice but to settle the Earth again for better or worse. “Welcome to the ground.”

Gino Sassani is a member of the Southeastern Film Critic's Association (SEFCA). He is a film and television critic based in Tampa, Florida. He's also the Senior Editor here at Upcomingdiscs. Gino started reviewing films in the early 1990's as a segment of his local television show Focus. He's an award-winning recording artist for Omega Records. Gino is currently working on his 8th album Merchants & Mercenaries. Gino took over Upcomingdiscs Dec 1, 2008. He works out of a home theater he calls The Reel World. Favorite films: The Godfather, The Godfather Part II, The Body Snatcher (Val Lewton film with Karloff and Lugosi, not the pod people film), Unforgiven, Gladiator, The Lion King, Jaws, Son Of Frankenstein, The Good, The Bad And The Ugly, and Monsters, Inc.
Tut (Blu-ray) “31 Nights Of Terror” Contest: Win Sharknado 3 On Blu-ray From Cinedigm