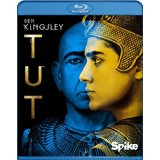 It wasn’t until I settled in to watch Spike TV’s three-part/six-hour miniseries based on the (relatively short) life of King Tut that I realized we hadn’t really seen his story depicted on screen before. I mean, it’s probably a bad sign that the most famous on-screen portrayal of the ancient Egyptian monarch comes courtesy of…Steve Martin. Given the liberties this miniseries takes with casting and storytelling, I reckon some historians would’ve preferred Martin as the famous pharaoh here. However, I still found this to be a suitably entertaining and attractive (if somewhat overstuffed) melodrama.

“No one fears you. You are the boy king who lives behind other men.”

Tut begins in 1332 B.C. just as a King Akhenaten (Silas Carson) is about to succumb to poison. The heir to the throne is his 9-year-old son Tutankhamun, and the prince is ordered to marry half-sister Ankhe to preserve the royal bloodline. The story then fast forwards 10 years to find Tut (Avan Jogia) as a sheltered pharaoh who rarely ventures outside the palace in Thebes. Most of the actual governing is done by royal vizier/advisor Ay (Ben Kingsley), and the country exercises its might through its imposing army, led by General Horemheb (Nonso Anozie). There’s also High Priest Amun (Alexander Siddig), who ensures each part of the country delivers offerings — whether they can afford to or not — to keep the gods happy.

Eventually, Tut sneaks away from the palace and falls in with a down-to-earth soldier named Lagus (Iddo Goldberg), who has no idea he just met the pharaoh. Eager to prove he’s not an absentee ruler, Tut joins the fight against the rebellious Mitanni. After Tut is declared dead in battle, Ay and the rest of the power players in Thebes angle for the throne and the hand of Queen Ankhe (Sibylla Deen). The queen wants to follow her heart and marry true love Ka (Peter Gadiot), Tut’s sparring partner and friend. Meanwhile, Tut survives his near-death experience and is nursed back to health by a half-Mitanni beauty named Suhad (Kylie Bunbury). Tut sees his miraculous return from the dead as proof that he is divine, and he begins defying the gods. Coincidentally(?), that hubris is followed by an unstoppable disease that threatens to ravage the country.

Spike TV isn’t exactly known for its original programming — at least when it comes to shows that don’t involve tattoos or failing bars — so I was pleasantly surprised by the scope of this miniseries. The production values for Tut, unlike certain other small-screen period pieces, are believable and transportive. Director David Von Ancken and writers Brad Bedeweg, Peter Paige, and Michael Vickerman give each of the three episodes a reasonably balanced mix of action, palace intrigue, and steamy basic cable sex. (Backsides and lateral nudity are the most you’ll get out of Tut, in case you were curious.)

Even Part 1/“Power” managed to be an impressively brisk installment considering all the exposition and introductions that needed to be crammed in. Part 2/“Betrayal” is probably my favorite installment, despite the fact that it features the least battlefield/hand-to-hand combat. This is the episode where all of the miniseries’ themes — Tut trying to shape his legacy while potentially angering the gods; scads of political maneuvering — come into their sharpest focus. But by Ep. 3/“Destiny” a lot of the backstabbing and clanging swords start to feel pretty redundant. The latter half of the finale also plays like an extended denouement, especially since we know Tut probably isn’t going to get a happy ending. Overall, the miniseries also feels like it might have a storyline too many, like the subplot with Ay’s son Nahkt (Alistair Toovey) that doesn’t really go anywhere.

Kingsley is easily the most recognizable face in the cast, and Ay gets a killer speech toward the end of Ep. 1 about how people who aren’t born with royal blood have to seize every opportunity. Otherwise, he — like his character — is largely on the sidelines. Fortuantely, Jogia gives a lead performance that matures and becomes more compelling as the miniseries goes on. At first, I thought Jogia was as ill-equipped as Tut to lead a production this size, but he winds up bringing a good mix of petulance, authority, and humanity. On the other hand, I kept expecting Siddig to become a more formidable irritant; if anything, Deen winds up being a bigger antagonist to Tut in her quest to remain in power. Goldberg is a pleasingly calm presence amongst the melodrama, and I enjoyed Anozie’s no-nonsense work as the general who just wants to kill on the battlefield.

Anozie and Bunbury are probably the only main cast members who most closely resemble actual ancient Egyptians. I’m not an Egyptologist — nor do I play one on TV — so that sort of thing doesn’t bother me that much. (I’ve become well accustomed to every culture in the history of planet speaking in the same vaguely British accent.) The biggest problem with the miniseries is that it squanders a great chance to offer something different. Practically every Tut-centric movie or TV show we’ve ever gotten centers around the discovery of his tomb, which was unearthed in 1922 after more than 3,000 years. In other words, rather than focusing on his death — Tut isn’t believed to have lived past age 20 — the miniseries had the unique opportunity to dramatize his life.

Instead, most of Tut plays like dozens of other Biblical epics or medieval dramas that combine monarchs, mysticism, and messy marriages.

Tut is presented in its original aspect ratio of 1.78:1. The 1080p image is arrived at with an AVC MPEG-4 codec at an average of 24 mbps. In addition to the predictably sandy, golden palette, we get a clean presentation that offers an extraordinary amount of detail and texture. (It’s there in the ornate costumes and set design, which pop with color as well.) There are also deep, inky blacks to be found within the palace walls — including some excellent shadow definition — although the slightest bit of noise creeps into a darkened battle late in the game. As I alluded to before, the tremendous look of Tut is absolutely one of its strong suits.

The Dolby TrueHD 5.1 track effectively equals the strong visual presentation. This is a lively, aggressive mix that features strong separation across all channels. Dialogue is clear and largely confined to the front speakers, while the rears expertly parse out crowd noise and Jeff Russo’s score. There are strong bits of dynamism here, like the screams in the distance in one rear speaker toward the end of Ep. 2 after Tut makes a gut-wrenching decision. The battle sequences also carry the requisite oomph that also avoids sounding like a mish-mash of twisted metal.

The Costumes of Tut: (3:31) Costume designer Carlo Poggioli can barely contain his glee about working on this project. He talks about his process (natural fabrics and linens for his intricate designs), while a few of the actors chime in about how the costumes helped them get into character.

History Revealed: (6:49) The filmmakers admit it’s impossible to make a movie that accurately depicts Tut’s life, since so little is known about it. So they set out to make a film that was historically accurate to the time period. (I’ll let more informed people decide if they succeeded there.) Egyptologist Kara Cooney is also on hand here to offer context about the life of Tut and the rest of the palace denizens.

Unmasking the Legend — The Making of Tut: (23:43) This is a more traditional “Making of” that includes some footage from the preceding two featurettes. The filmmakers talk about filming in Morocco and framing Tut’s life as a Shakespearean tragedy. There is also a good amount of time dedicated to the sets and stuntmen who helped lend the movie its most effective bit of authenticity.

The scale and scope of Tut exceeded my expectations, especially given its small-screen origins. But while the movie is consistently entertaining, it also packs in too many familiar tropes. Ultimately, Tut is an underwhelming exploration of a potentially fascinating subject and time period.