Posted in: Disc Reviews by Dan Holland on October 22nd, 2015 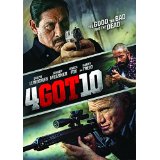 There is something to be said about cult celebrities: if you are a fan, you will watch any movie in which they have a role. In the case of 4Got10, you get Danny Trejo and Dolph Lundgren.  In addition to these cult giants, you have the prolific Johnny Messner (Tears of the Sun, Anacondas: The Hunt for the Blood Orchid) delivering a strong performance in the lead role. If you are a fan of action thrillers, this film is already off to a great start. A man named Brian (Messner) wakes up in the middle of the desert with no recollection of how he arrived there. Soon there after, he finds himself in a web of lies and vengeance involving a ruthless drug lord (Trejo) and a tenacious DEA agent (Lundgren). As the film progresses, Brian slowly regains his memory, revealing that things may not be as they seem.

4Got10’s strengths are in acting and the complexity of its story. Trejo playing the part of a Mexican drug lord is not uncommon, but I’d like to talk a little bit about Lundgren’s portrayal of a DEA agent. At first, I was a little skeptical of this role. Lundgren, to me, has always been the fully-armed hero of cheesy 80’s action films. To see him as a refined and collected older man was a little off-putting at first, but his demeanor eventually won me over. Johnny Messner’s portrayal of an amnesiac was quite believable, and more importantly, identifiable.

I love how complex the story to this film is. All the characters are connected to one another in some way, and the connections between them never feels forced. I have seen too many modern thrillers with a twist loosely attached to the end, just for the sake of defying audience expectations. 4Got10’s twist is unexpected, and it really ties the complex web of characters together tightly.

Where the film begins to lose me is the way in which the story is told. Yes, Brian is an amnesiac, but the overwhelming number of times we cut to a flashback began to wear on my patience as a viewer. I assume it was hard to juggle the complexity of the story’s connections and a character that can’t remember any of the connections, and ultimately, it just didn’t work in the film’s favor. Even though the film clocks in at under the average of 90 minutes long, the consistent flashbacks make the film feel a little longer than it actually is.

Finally, the amount of cheesiness in this film is overbearing. I’m all for tongue-in-cheek action films, but I like to see a balance between the cheese and the film taking itself seriously. Too many of the visual effects in the film are incredibly outlandish and take me out of the film entirely. I can excuse the graphic titles that introduce the characters, but at one point the graphics become too distracting. Dolph Lundgren receives a text, and the text bubble pops onscreen so the audience can read what is being communicated. This graphic is just entirely out of place and doesn’t fit the theme of the film very well.

Overall, the film is worth watching for the acting, but it just felt too long. There were too many flashbacks and an excessive use of slow motion that will make some viewers impatient. I feel that most fans of Danny Trejo or Dolph Lundgren wouldn’t mind the flashbacks or the slow motion, which ultimately makes it a flick for your action collection.