Posted in: The Reel World by Archive Authors on October 22nd, 2015 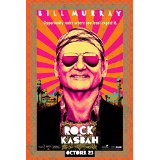 That’s Rock the Kasbah with a K. It was probably decided to do that spelling so as not to be confused with the hit song “Rock the Casbah” by the Clash when googling. The movie is about a down-on-his luck music manager who goes to Afghanistan on a U.S.O. Tour. There is a great scene early on when the aforementioned manager visits his daughter by sitting outside her window as she lectures him that there are no casbahs in Afghanistan. It’s a perfect metaphor for a character who has obviously screwed up his life so much that he can’t even go into his ex-wife’s house. The music manager, Richie Lanz, is played by Bill Murray and may be his best comedy performance in years. Murray is famous for not having a manager, publicist, or agent, so it’s funny seeing him playing a low-rent version of all three. The film was written by Mitch Glazer (Magic City) who had a big hit years earlier with Murray called Scrooged. It is directed by Barry Levinson, who had a long string of big hits in 80’s and 90’s like Diner, Good Morning Vietnam, Rain Man, Bugsy, Sleepers, and Wag the Dog and has gone on to producing a lot of television. Levinson’s more recent films have been a bit bizarre. The Humbling (2014) with Al Pacino, What Just Happened (2008) with Robert DiNiro, Bruce Willis and Sean Penn, Man of the Year (2006) with Robin Williams, and Envy (2004) with Jack Black and Ben Stiller are all examples of ambitious projects that had tilted, offbeat sensibilities which had trouble connecting with audiences. Rock the Kasbah might seem like that kind of project as well, but it turns out that a crazy combination of elements has mixed together surprisingly well.

I say that this is Murray’s best comedy performance in years, but it also might be one of his most nuanced and fully-developed as well. Murray’s screen appearance have been erratic and full of variety, as if he’s busy living life and movies are something that he just squeezes into his schedule. There have been a variety of types of roles from clearly dramatic like his portrayal of F.D.R. in Hyde Park on Hudson and Olive Kitteridge (for which Murray just won an Emmy) to roles in just about anything that Wes Anderson or Jim Jarmusch put out.

The film is beautifully filmed by Levinson. What I mean by that is that Levinson has created a very believable mise en scene, as the French say. All the locations seem completely real including some of the most desolate and rundown locations I’ve ever seen from Los Angeles to Kabul. Everything seems very organic and real no matter how outlandish the situations increasingly become. The film is overflowing with fantastic performances by Kate Hudson, Zooey Deschanel, Scott Cann, Danny McBride, Taylor Kinney, and Bruce Willis. Bruce is so high on this film that he did his first appearance on the Today show in 21 years.

I haven’t gone too heavily into what the film is about because, frankly, it defies expectations. It’s much better than it seems it should be. It reminds me a little of the film Slumdog Millionaire, in that it tries to portray how American culture is assimilated in some of the most unlikely places. It successfully navigates some of the touchiest material possible by showing the Middle East culture honestly and affectionately. It is a fairly broad satire at times, but the characters all seem grounded and honest through all kinds of extreme situations.

Rock the Kasbah is genuinely funny. I very rarely say that and frequently sit through comedies and never laugh out loud. It is both funny and likeable and honest and, dare I say it, touching. I have no choice. I have to say it. Rock the Kasbah rocks.