“31 Nights Of Terror” The Following: Season 3

Posted in: No Huddle by Archive Authors on October 23rd, 2015 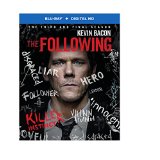 Actually, it started three seasons ago. The creator of Dawson’s Creek and The Vampire Diaries, Kevin Williams, delivers a thriller that is a bold new entry in the crime drama for television. The Following was 15 episodes of nail-biting bliss that kept the viewer guessing and riveted long after its gut-wrenching cliffhanger season after season. For a while I was beginning to wonder if Williamson had lost his touch with the Scream series, but what you’ll discover here is that Williamson may just be the king of creating and penning one of the darkest serial killers on the small screen.

Season One worked as a tight, methodical thriller where Hardy and Carroll played an elaborate game of cat and mouse. This time the writers take this hunt to a ludicrous level.  Not only does the FBI have to contend with Carroll and his loyal followers, but now a new enemy is on the rise, one that wants to add Carroll into their fold and become this insane extended family of psychopaths.  This kind of insanity is over the top; is it very believable, though?  Who cares? This is television; let them go crazy and run with it. If we can have TV shows with aliens that all speak perfect English, then a family of serial killers creating a super cult of killers should have its place on TV as well.

Season Two was unbridled insanity that announced to America that you are no longer safe and that at any moment some nut with a mask will kill you, whether it’s for fun or for a cause.  That is what made Season Two so startling and terrifying; it let us know that your friendly neighbor next door, the barista at your favorite coffee shop, or even your loved one could be a killer.  How does one combat this?  Can it even be fought?  Williamson gives us the one man who can save us all, and that is Ryan Hardy.  Where Jack Bauer is the one-man army against terrorism, Hardy is the army against cult serial killers.

Season Three becomes less about Joe. But that doesn’t mean that the relationship can’t be explored more than ever. In fact, if you’re tuning in for Joe, he doesn’t even pop up until the fifth episode of the season. He’s in prison and awaiting his execution in just 48 hours. Haven’t we been here before? Yes, it’s very much how the show started out. But Joe isn’t going to be the big problem this season. There is a wonderful episode that pays off the Joe and Ryan fans. When Ryan turns down his invitation to be at the execution, Joe takes hostages like only Joe can. It leads to an encounter that brings all of the subtext of the previous two years to the surface. It’s a rather touching finale for the relationship. There was incredible chemistry there, and the series was never the same without it. Sure, they keep Joe around after his death as a phantom inside of Ryan’s head. It’s just not the same.

What Season Three is really about is consequences. Our three heroes have done some evil things themselves in their obsession to bring down Joe and his followers. Now it’s coming back to haunt them. Friends will die, and innocents will be sacrificed in their name. Mark (Underwood) wants revenge for the killing of his mother and brother from Season Two. He teams up with others to leave brutal tableaus behind that reveal the truth behind our “heroes'” actions. Slogans taunt them that “innocents will die as you lie”.

Mark works with a couple who have their own agenda. Meet Daisy (Kearney) and Kyle (Parrish). They are somewhat of a wicked couple who love to kill. They are not followers but work for a mysterious figure in the background as they assist Mark.

I think it was important that these characters could not walk away from what they had done without consequences. Yes, we’ve learned to root for bad guys, and it’s fun. But this show was always about these characters with the help of some excellent writing. These were real and gritty cops who hooked on to a certain white whale and couldn’t let go. There’s a price to be paid for holding on so long. This season it’s paid with interest. They will fall apart. Ryan falls off the wagon and may miss out on a girl who actually doesn’t want to kill him. For Mike it’s already cost him Max, and they all will carry scares before this season is over.

The real villain of Season Three is not Joe, Mark, or the couple. It’s a new character who was Dr. Strauss’s best student. His name is Theo, and he is played brilliantly by Michael Ealy. Ealy is a tremendous actor who really doesn’t get enough recognition. He has powerful eyes, and he plays this killer in a far more frightening way than the others on the show. Unlike them, he doesn’t want followers or attention. He’s a stone-cold killer who doesn’t get a rush or have an uncontrollable desire to kill. This is the kind of guy who would never have even come to the police’s attention if he hadn’t been forced into Ryan’s crosshairs because of his selfish mentor. There may not be the wonderful interaction that existed in the Ryan and Joe relationship. This is indeed a different thing altogether. It’s a creepy character that rings more true to life and hence much more frightening.

This is a show designed for binge-watchers, those like me who hate the thought of having to wait weeks for the conclusion of the story.  Coming in at 15 episodes, I had this devoured over a well-paced weekend, but easily this could have been watched in less time.  The creative team involved knows how to hook a viewer and make us click to the next episode like an obliging addict.  This is a well-crafted drama; where the first season hits you with finesse, Season Two hammers the viewer with a blunt instrument.

I’m not exaggerating when I say this may be the most violent series on television, and it isn’t even on a paid cable network.  There is blood, but never an overabundant amount, and that is the only way I can believe the show skates past the ratings board, because there are some moments that are just brutality at its most animalistic.  How Ryan Hardy hasn’t gone mad from all the violence is something the show dips its toes into, where Ryan himself has claimed more victims than even some of the more violent killers in the show.  Though Ryan wants to live a normal life, is this even possible? Can a man be pushed so far into the darkness that salvation is just an impossible task to achieve?

If you are looking for a series with a faster pace than True Detective and a body count that rivals The Walking Dead, this is the series you need to be watching.  The twists may not have the punch of the first season; Season Two makes up for it with plenty of shock and awe.  The comparisons to True Detective and Hannibal are hard to avoid, but the show has a unique voice that is all its own.  With clever dialog and twists that drive the story to some dark places, The Following is now gone. It’s true that the series finale has left open a chance to return. I’m not sure that’s going to happen. This release is likely your final chance to be a good accolade and relive the final hours of The Following.

This review was written by Gino Sassani and Brent Lorentson